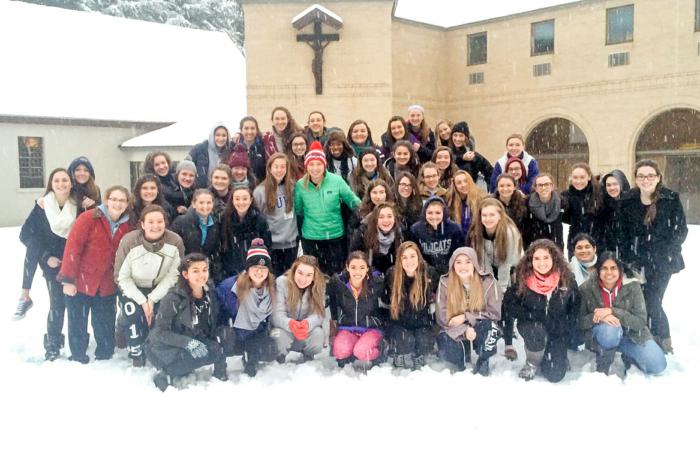 Speak to a current student or graduate from Ursuline Academy in Dedham, and they'll likely attest to the truth of that statement.

"The bonds of sisterhood that are formed here run very deep," said Julie Griffin-Carty, director of alumnae relations at Ursuline Academy and a 2005 graduate of the school. "There is a very special bond that is forged while a student here that never really leaves you."

According to Griffin-Carty, regardless of age difference, once two Ursuline students -- current or former -- meet, "there's an instant acceptance, an instant friendship" that comes about.

"Ursuline is very much about giving you the tools to become the best person you can be," she said.

One of the reasons for this "sisterhood," as Griffin-Carty describes it, is the school's campus ministry program. For close to 30 years, the school, which encompasses grades 7-12, has sought to connect all ages through its campus ministry.

According to Mary-Kate Tracy-Robidoux, the school's campus minister, every year a group of juniors and seniors are chosen to be peer ministers. These peer ministers lead retreats for the younger grades.

"They are in charge of every bit of it," Tracy-Robidoux explained. "They own, direct and guide it entirely on their own -- everything from ordering the food, to leading the prayer services, to thinking of and implementing fun group activities."

Juniors and seniors also have retreats, she continued, but these are given by alumnae of the school who lead, implement and direct a weekend retreat for each of the upper grades.

"This model is unique, even among other Ursuline schools," said Tracy-Robidoux, who herself is a graduate of the school. "And it really is fostering a true sisterhood among us."

"The whole age concept is thrown out the window at Ursuline," she said. "Younger girls aren't afraid to talk to the seniors, and alums are very much a part of the community."

Black noted that the school "is a very loving and welcoming community" and that it has helped develop a "core value system for me and a true central focus for my life."

The 18-year-old praised the many retreats she has participated in since entering in the 9th grade. It was because of these retreats that she became a peer minister last year, so that she "could focus on how to transmit my faith to the younger girls."

This year, Black was chosen to become a senior head-minister, a role that required her to meet with a group of 8 peer ministers to deepen their own faith before leading the retreats.

"It's been fantastic," she said. "It's a nice outlet for us to talk, and pray and connect on a deeper level.

As she looks toward her graduation later this month, Black hopes she can find a similar community at Sacred Heart University in Fairfield, Conn. Where she plans to study marketing in the fall.

"If I can find something like what I've found here, then I'll be all set," she said.