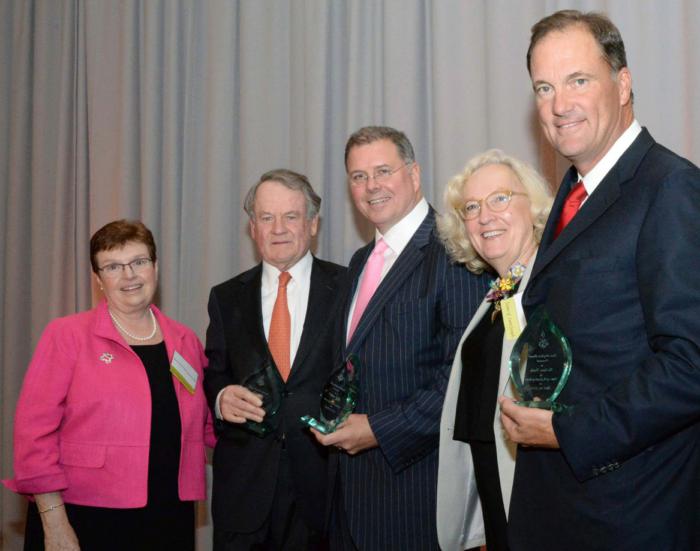 Sister Rosemary Brennan, CSJ, president of the Sisters of St. Joseph of Boston, and director of Mission Advancement Carol Mack, present the Dear Neighbor Award to John, Barry and Tom Hynes at the Living the Dream dinner held April 30 at the Seaport Hotel in Boston. Pilot photo/courtesy Sisters of St. Joseph

BRIGHTON -- Approximately 400 friends, former students, and supporters of the Sisters of St. Joseph attended the second annual Living the Dream dinner held on April 30 at the Seaport Hotel in Boston. For 141 years the Sisters of St. Joseph have educated countless students. In the year 2015, they continue with enthusiasm and dedication to "connect neighbor with neighbor and neighbor with God" within the Archdiocese of Boston and beyond. The event raised over $630,000 to support the Sisters and their ministries.

During this event, the Hynes family of Boston was the honored with the Dear Neighbor Award. This award was given in recognition of the outstanding contributions they have made to the growth and prosperity of Boston and, especially, for their contributions to the poor and disenfranchised through their compassionate philanthropy. Bostonians fondly remember Mayor John B. Hynes and popular television anchor, Jack Hynes. Co-chairs of the evening, Barry, John, and Tom Hynes, were present to receive the award, speak on behalf of the family, and congratulate the Sisters of St. Joseph for their decades of service and presence among the people of Boston.

During the evening Mike Sheehan, CEO of the Boston Globe and emcee for the event, introduced Sisters Cathy Clifford, Mary O'Rourke, and Pat Andrews who were featured in a brief video about the way in which the Sisters of St. Joseph "connect neighbor with neighbor and neighbor with God."

The guest speaker was Kristen Donoghue McCosh, an active and vocal member of the disability community for over 30 years, beginning in 1983 when as a freshman at Mount St. Joseph Academy, she sustained a spinal cord injury in a diving accident.

McCosh explained that, "Nearly a decade before the Americans with Disabilities Act was signed into law, the Sisters of St. Joseph made my return to school possible."

"They did not need a federal law to tell them what to do, because they followed a divine law," she continued.

Today, the Sisters of St. Joseph of Boston, provide support for countless individuals in need throughout the Boston area and well beyond. Many sisters, associates, and lay partners minister in schools and parishes, volunteer as literacy and citizenship tutors, advocate for survivors of human trafficking, and companion the aged and infirm. Others provide counseling and spiritual companionship for those who desire to deepen their relationship with God. A few of these ministries include St. Joseph Retreat Center, The Literacy Connection, Casserly House, and The Women's Table.