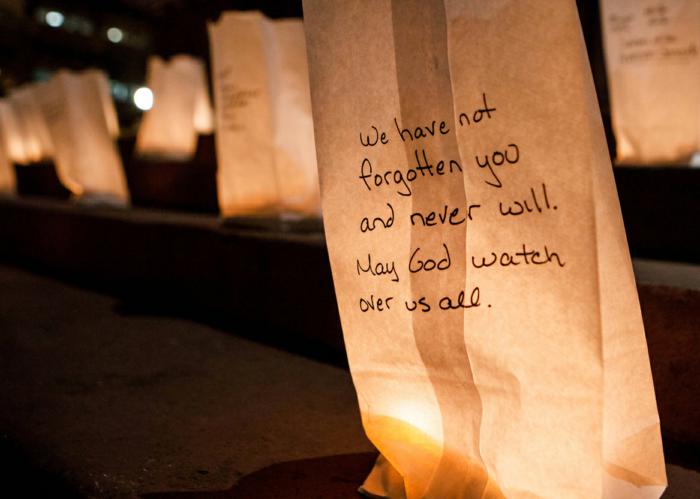 Votive candle holders with messages remembering victims of the Armenian genocide sit on the steps of Trinity Church in Boston's Copley Square during an April 23 ecumenical prayer service to mark the centennial of the genocide during which 1.5 million people are believed to have perished. Pilot photo/ Gregory L. Tracy

BOSTON -- Protestants, Orthodox and Catholics filled one of the oldest churches in Boston as they called the tragic events suffered by the Armenian community 100 years ago by the only name that fits -- genocide.

Coordinated by the Armenian Genocide Centennial Committee of America, Eastern Region, the event drew bishops, clergy and laity to Trinity Church in the Back Bay, April 23, for a memorial vespers on the centennial anniversary of the Armenian genocide suffered in 1915 at the hands of Ottoman Turks.

The prayer service was the first of several events marking the anniversary around the city, including a prayer service and a procession the next day from the State House to the Armenian Heritage Park on the Rose Kennedy Greenway.

One of the first speakers at the service, Ani Karabashian, shared her thoughts as a descendent of Aurora Mardiganian, a survivor of the genocide.

"It is of major importance that we not only remember the stories of those who survived or died during the genocide; no, remembering is not enough. We must share their stories and cultivate global awareness of our history and suffering. We must speak up and never forget," she said.

Governor Charlie Baker highlighted the participation of the Armenian community in Massachusetts, since many immigrated to the United States to escape the genocide.

"The Armenian American community has contributed mightily to the success of the Commonwealth of Massachusetts. Our state is home to the oldest Armenian Church in America, and we are happy to have the second largest community in the nation," he said.

"Our nation's efforts were notable to help save the survivors of the Armenian genocide at that time, but we should never forget the innocent lives that were lost," the governor said.

Metropolitan Methodios, leader of the Greek Orthodox Metropolis of Boston, lead the opening prayer of the vespers service.

He struck a note of solidarity between the Greek and Armenian communities of Massachusetts.

"The Greek American community of New England feels a special bond with our Armenian brethren, especially those that live in Watertown. I commend the Mass. Council of Churches, the Armenian community, and the interreligious community for organizing this centennial commemoration. The memories of the victims of 1915 must never be forgotten, not only by their descendants, but by people of goodwill throughout the world," he said.

"What happened in 1915 is being repeated today throughout the Middle East and Africa. We are appalled by the brutality inflicted upon people of every religion. Many turn a blind eye, but we must not remain silent before such ongoing, horrific acts of brutality. To do so would be disrespectful to the memory of our Armenian brethren. We must raise our voices in solidarity and prayer. As St. Paul reminds us," Metropolitan Methodios said, as he quoted Corinthians. "If one member suffers, all suffer together; if one member is honored, all rejoice together."

The metropolitan set the stage for remarks from Archbishop Jean-Clement Jeanbart, leader of the Melkite Catholic Archdiocese of Aleppo, Syria.

Archbishop Jeanbart noted the closeness of the Catholic community in the Syrian city of Aleppo with Armenian Christians whose forefathers made the city their home after the 1915 genocide. Affirmations of recognition could be heard from Armenians in the pews at Trinity Church as the archbishop started speaking.

Earlier in the day, those killed in the genocide were officially proclaimed saints by the Armenian Apostolic Church. The Melkite Archbishop of Aleppo acknowledged the new saints and any of their descendants present.

In her sermon, Rev. Laura E. Everett, the executive director of the Massachusetts Council of Churches, echoed a theme of the night, when she pointed to the example of Christ driving an unclean spirit from a possessed man in the Gospel as a demonstration of the power of truth in the face of evil -- particularly the power of identifying a specific evil by name.

A statement from Cardinal Seán P. O'Malley, read by auxiliary Bishop Arthur L. Kennedy, explained the commitment to witness to the world on the truth of the genocide, with special regard for the victims, the people of Armenian heritage, and the faith tradition that sustained itself through the horror.

"There is no division among them. Therefore, they are the saints not just of some of us, but of all of us. Their Lord is one. Their witness is one. Their blood is one," he said.

He said Christians owe martyrs a unified witness to the truth.

"But to the martyrs of 1915 we also owe the full recognition of the monstrously systematic murder and assassination of identity be called genocide," the cardinal said.

"Concealing or denying evil is like allowing a wound to keep bleeding without bandaging it," the cardinal's statement quoted Pope Francis.

Before the benediction and dismissal, the gathered sung the Lord's Prayer in Armenian led by Father Daniel Kindikyan of the Eastern Diocese Armenian Orthodox Church.