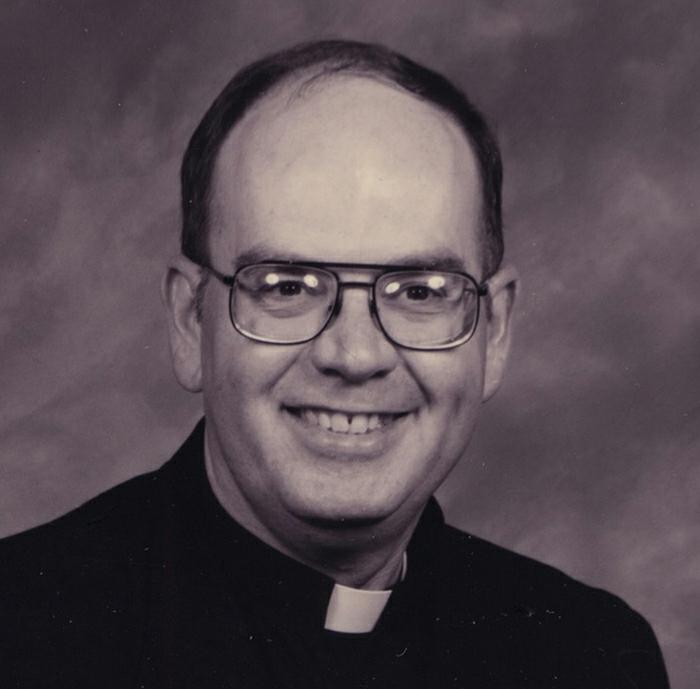 The shocking news spread throughout the Canton parish; their pastor Father Mike McLellan had died in the narthex of the parish church just prior to his processing into the church for the celebration of the 11:30 Sunday morning Mass, April 26 -- Fourth Sunday of Easter and "Good Shepherd Sunday."

Born in Norwood on Nov. 5, 1950 to the late Howard and Eileen (Walsh) McLellan, he and his five siblings were raised in nearby Walpole. Parishioners of Blessed Sacrament Parish, the children attended local schools and Mike was graduated from Walpole High in 1968.

He entered the archdiocesan seminaries at the former Cardinal O'Connell Seminary in Jamaica Plain in the September following high school graduation. Early on he and contemporaries realized that there might be a missing subject in the seminary curriculum and obtained permission to replace the modern language requirement of French with Spanish. Since there was no faculty member who could teach Spanish they studied at nearby Boston State College. When his class moved to St. Clement Hall in Brighton, Spanish classes continued at Boston College.

On completion of his seminary studies he was ordained to the priesthood at Holy Cross Cathedral by Humberto Cardinal Medeiros on May 15, 1976; he spent the nation's Bicentennial year at St. Margaret Parish in Dorchester before moving next door to St. Paul Parish where he served as associate for the next decade. St. Paul had a large and growing Hispanic population and so Father McLellan's facility in the language and his "simpatico" with the Hispanic community at large made a perfect fit. He was reunited with an old friend and mentor, Msgr. Bill Francis.

He remained in the city the next year, serving as parochial vicar at St. Columbkille Parish in the Hub's Brighton section. In 1988, he returned to familiar territory as parochial vicar at St. Patrick, Roxbury where he had served as deacon prior to his 1976 ordination. During this time he was appointed chaplain of the MBTA Police department, and served as their chaplain until his death.

In October 1991, Bernard Cardinal Law named him pastor of Blessed Sacrament Parish in Jamaica Plain. The once almost totally Irish and Irish American parish had become well populated with Spanish speaking Catholics from various countries. Again he was returning to "familiar territory" as the now shuttered Cardinal O'Connell Seminary was nearby Blessed Sacrament and his desire to study Spanish in place of French proved prophetic and extremely important for the new pastor. He was now fluent in Spanish, but more, he had developed a Hispanic heart.

For the next 13 years he guided the parish, walked its streets, met his people, and by his easy style and ready approachability genuinely endeared himself to the rapidly increasing Spanish speaking community, but also to the remaining older families of the parish.

The parish closed in 2004 and again, Father McLellan returned to familiar territory, this time as administrator of Holy Family Parish in Dorchester; this parish resulted from the merger of St. Kevin Parish and neighboring St. Paul Parish where he had served from 1977-1988.

In 2008, he again returned to "familiar territory" though this time moving closer to hometown Walpole, now as pastor of St. John the Evangelist Parish in Canton. The Canton parish could not have been more different from all of Father McLellan's previous parishes. The town just south of Boston has remained steady in demography, with not much demand for a Spanish speaking priest. Father McLellan moved effortlessly into the new parish.

A parishioner summed up Father McLellan's key to success at Canton -- and elsewhere for that matter -- "easy going style, sense of humor, practical spirituality, and his own personal knowledge of theology, history and police lore." Staff and personnel of the parish recalled that the rectory was also warm and welcoming truly making it a "parish house" as they were once called. He was likewise a steady and sure presence in the parish school.

Father McLellan's Funeral Mass was celebrated at St. John the Evangelist Church in Canton on May 1. Seán Cardinal O'Malley was to be the principal celebrant; his brother, Father Daniel McLellan, OFM assigned to Clemson University in South Carolina was to be homilist. Among those indicating that they would be concelebrating were auxiliary Bishops John Dooher, Robert Hennessey, and Peter Uglietto; priest concelebrants were his longtime friend and former seminary professor, Msgr. Charles Bourque; Father Kevin Mullen, OFM, provincial of the Holy Name Franciscan province; classmate Father John Reardon who is in residence at the Canton parish; Father Bryan Parrish, native son of St. John; and other classmates and priest friends of Father McLellan.

Following the Funeral Mass Father McLellan was to be buried in St. Mary Cemetery, Randolph.