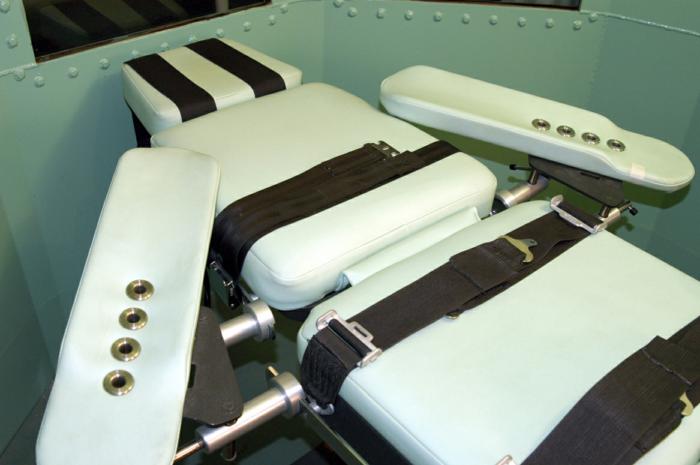 The table where executions are carried out by lethal injection at San Quentin State Prison in California. CNS photo/courtesy of California Department of Corrections

For centuries, the Catholic Church understood capital punishment to be a legitimate tool of the secular state to punish criminals convicted of heinous offenses.

Criminals were even executed in the Papal States and capital punishment was legal in Vatican City State from 1929 to 1969, though no executions took place during that time. In fact, the last execution to take place in the Papal States was in 1870, under the reign of Pope Pius IX.

But beginning with Pope St. John Paul II, the Church has staked out a strong position against the death penalty, reframing it from a matter of punishment to one of self-defense that, given the modern state's ability to securely incarcerate criminals, should rarely be used.

"It is the case that the teaching on capital punishment is undergoing development, and we are in the middle of it. It's not something we actually know how it's going to end up," said David Franks, a theologian and vice president for mission of the Theological Institute for the New Evangelization at St. John's Seminary.

Complicating the matter is the fact that, unlike abortion, capital punishment is not an intrinsic evil, and Catholics can legitimately believe there are instances when it is appropriate. But the recent popes and bishops have raised several points about capital punishment that all Catholics have to consider.

"Faithful Catholics have to take into consideration all the reasons behind this new emphasis, and it has to do above all with the humanity of the criminal. And we can't forget the fact that God the Father in his mercy wants to save every person," Franks said.

In their April 7 joint statement on the death penalty, the Catholic bishops of Massachusetts said the Church's teaching "is further developing in recognition of the inherent dignity of all life as a gift from God." With that in mind, the bishops voiced their opposition to Dzokhar Tsarnaev, the convicted Boston Marathon bomber, being sentenced to death.

The bishops also quoted Pope Francis, who described capital punishment as "an offense against the inviolability of life and the dignity of the human person" in a detailed argument he wrote in mid-March to the president of the Madrid-based International Commission against the Death Penalty.

Pope Francis also wrote that capital punishment "contradicts God's plan for man and society," and that it "does not render justice to the victims, but fosters vengeance." The pontiff's statements are in line with his immediate predecessors, and signal that the Church's teaching on this issue is still developing 20 year after St. John Paul II raised serious doubts about the death penalty in his 1995 encyclical, "Evangelium Vitae" ("The Gospel of Life"). Franks said the late pontiff was concerned that capital punishment would be distorted in a culture of death. Franks also said he believes the theology of Divine Mercy is providing the impetus to reshaping the Church's approach to the death penalty.

Father James T. Bretze, S.J., a professor of moral theology at Boston College, said the shift in Church teaching on capital punishment can also be traced to Vatican II and the teachings that developed in "Gaudium et Spes" on the dignity of conscience and in "Dignitatis Humanae," on the intrinsic rights of the individual to practice religious freedom.

"These two positions also involved real development in Church teaching, and they are firmly grounded in a better understanding of the core dignity of the human person as made in the image of God," said Father Bretzke, who added that the Church understands that "even humans who have made serious errors do not thereby completely lose their God-given humanity."

Writing in the 13th century, St. Thomas Aquinas argued that criminals, by their actions, forfeited their human dignity, thus making it easier to put them to death. The Angelic Doctor compared the state's execution of criminals to a physician having to amputate a diseased limb in order to protect the rest of the body.

In traditional Catholic thought, capital punishment serves four ends: retribution, rehabilitation, defense against the criminal, and deterrence. Dating back to the Church Fathers, the Catholic Church has held that the state has the right to execute criminals, though Church thinkers warned against vengeance and torture.

The Catholic Church does not teach that capital punishment is a grave evil partly because it is clearly sanctioned in the Bible. The Old Testament Mosaic Law prescribes the death penalty for at least 36 offenses that include murder, incest, adultery and blasphemy. St. Paul seemed to take capital punishment for granted when he wrote in Romans 13:14 that a magistrate "does not bear the sword for nothing; for it is a minister of God, an avenger who brings wrath on the one who practices evil."

The Church today clearly takes more of a dim view. The Catechism of the Catholic Church (No. 2267) quotes "Evangelium Vitae" in upholding the Church's traditional position that the state has the right to exercise the death penalty, though with the condition that it be "the only possible way of effectively defending human lives against the unjust aggressor." In "Evangelium Vitae," Pope St. John Paul II wrote that the necessity of executing a criminal today is "very rare, if not practically non-existent."

While adding that the current teaching is not infallible, Father Bretzke said he could not see any situation in modern society where the use of capital punishment would be morally legitimate, given the current official Catholic magisterial teaching.

"Can a Catholic in good conscience disagree with this teaching of the Church?" Father Bretzke asked. "Yes, but the burden would be on that person to consider very seriously his or her reasons for holding a position which is in objective dissent from the teaching of the magisterium."