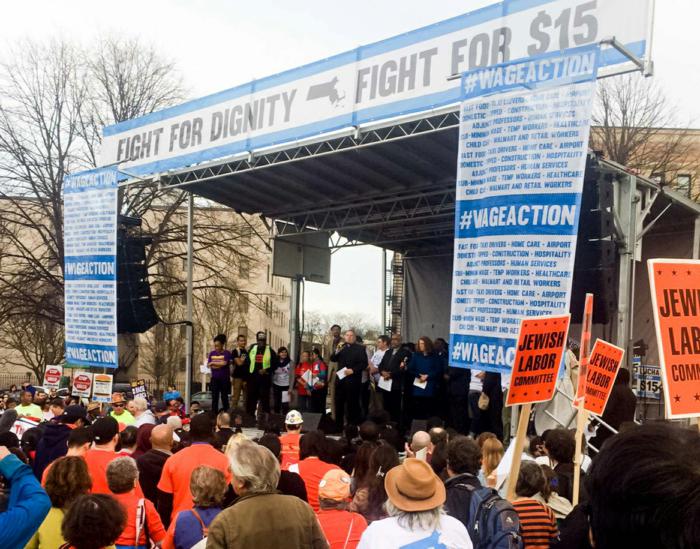 BOSTON -- As workers took to the streets of Boston, April 14, as part of a national and international mobilization to push for a living wage, the Church was there to support them.

Boston organizers held events the day before the two-year anniversary of the Boston Marathon bombings, while other cities in the country participated on April 15. According to organizers with the #WageAction coalition the event brought 5,000 supporters into the streets of Boston, and spread the next day to more than 200 cities in the United States, 100 cities in 40 countries, and spread over six continents.

Central Region Episcopal Vicar Father James Flavin served as the master of ceremonies for the faith based portion of a fair wage rally at Forsyth Park in Boston to kick off a march through the city.

"People are always happy when the Church shows up at these events. They know that we always stand up for human dignity and want people to have a just wage," Father Flavin told The Pilot.

The faith based portion of the rally included blessings in English and Spanish from Rev. Jose Encarnacion of Christian Community Church of Worcester, Rabbi Barbara Penzner of Temple Hillel B'nai Torah in West Roxbury, and Rev. Miniard Culpepper of Pleasant Hill Baptist Church in Dorchester.

"There were four prayers, and it was just for the safety of the marchers as they marched downtown. We want these things to remain peaceful but to raise awareness to folks," Father Flavin said.

Called the Fight for $15 Day of Action, the event began when workers and students assembled at Forsyth Park, just off Huntington Avenue near Northeastern University, for a rally which featured Gladys Vega, executive director of Chelsea Collaborative; Veronica Turner, executive vice president of 1199 Service Employees International Union, United Healthcare Workers East; and others.

The march arrived at Northeastern University to protest low wages among adjunct professors, made stops in Boston neighborhoods such as Chinatown to protest in favor of the rights of healthcare workers and advocate for the healthcare of low-income residents as a priority during merger negotiations, before marchers arrived at a McDonald's on Tremont Street where fast food workers spoke out against low pay. The rally ended near Boston Common.

Father Flavin said the event raised a key question for workers and their families in Boston.

"What kind of city of Boston are we going to build if nobody and no families can afford to live here?" he asked.

Father Flavin explained that the Catholic Church supports a right to a fair wage for workers based on "Rerum Novarum," or "Rights and Duties of Capital and Labor," an encyclical issued by Pope Leo XIII in 1891.

"It was the first time the Church spoke out in favor of trade unions, which would uphold the dignity of workers. So, that's really been the foundation of everything we do," Father Flavin said.

The document addresses the Catholic position on the rights of a worker, supports unions and guilds, and opposes socialism.

"Work for us as Christians is not just something extra, but rather it's participating in God's creation and part of the order of what it means to be human," Father Flavin said.