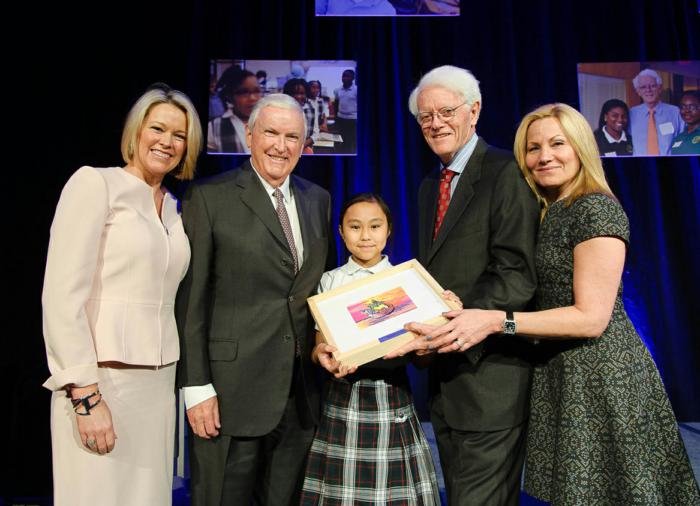 BOSTON -- As a young child, philanthropist and investment banker Peter Lynch attended Catholic school for only one year.

"My father took sick and so I had to go to the public schools after that," he told The Pilot.

For the past 25 years, Lynch and his wife Carolyn have worked tirelessly to help students receive a Catholic education even in the face of adversity.

On April 15, the Inner-City Scholarship Fund (ICSF), which was chaired by Lynch for close to 20 years, held its 25th Annual Dinner Celebration at the Marriott Copley Hotel in Boston. The event was attended by nearly 1,000 people and helped raise over $3.1 million, according to Gina Rindfleisch, development officer of the Catholic Schools Foundation, the organization that oversees the ICSF -- money which will be used to provide partial scholarships to inner-city schoolchildren attending Catholic schools.

Attendees of the dinner were greeted by students from seven different area Catholic schools, which brought displays to show off some of their academic accomplishments. Musical selections were also performed by the students from Trinity Catholic Academy's Woodwind Ensemble in Brockton.

Heather Unruh, co-anchor of WCVB-TV channel 5, served as the master of ceremonies for the evening.

Michael Reardon, director of the Catholic Schools Foundation, began the evening noting that "we are celebrating 25 years of making a difference in the lives of young people."

"All the students you see here tonight -- if you hear their stories, you can understand that this is what you make possible," he told the audience.

Following dinner, Rudy Favard, a 2011 graduate of Malden Catholic High School and former ICSF scholar, began the evening's speaking program. Favard received national media attention in 2011 after The Boston Globe featured him for selflessly volunteering to carry a local boy with cerebral palsy up the stairs of his house to bed several times a week.

"When my family came here to America from Haiti in search of a better life and a better education, they knew that Catholic school was crucial, not only intellectually, but morally and spiritually as well," Favard said. "They couldn't have been more right."

Favard went on to explain that he will be graduating from Sacred Heart University this year and will be continuing onto the Masters program at West Virginia State University.

"Through your hands, you -- the donors of the ICSF -- God made a way for me to get a better education," he said. "Please continue to believe in the Catholic Schools Foundation's mission and continue to give."

"I stand here representing the thousands of students you directly support each year," Simoly began. "On behalf of all of us, I want to thank you for giving us the chance to make our dreams possible."

Simoly, who was born in Haiti, recounted how her parents left her in the care of her grandparents when she was two years old as they emigrated to the United States. Five years later, she came to Brockton to be reunited with her family.

"I found myself on a plane. By myself. Not speaking a word of English and not understanding that my life was going to change drastically," she said.

After reuniting with her parents, and meeting two younger siblings for the first time, Simoly enrolled in Trinity Catholic Academy in Brockton. She went on to Cardinal Spellman High School, also in Brockton, but during her freshman year, her life once again changed drastically.

"My mother, who was 2 months pregnant with my youngest brother, suffered a massive stroke, which caused the whole left side of her body to be completely paralyzed," she said.

Simoly went on to explain that, in order to care for the family, her father stopped working. Bills piled up, and eventually the family -- five children and two parents -- had to move in to one-room housing.

Doing homework in a room with 6 other people was very challenging, she admitted, "but I pushed myself and was able to become a better student and a stronger person," she said.

"I want to thank you, the benefactors of the Inner-City Scholarship Fund, for supporting kids like me," she said. "You've allowed me to grow into a better person through my education and through my faith."

"The education I received at those two schools has fully prepared me to begin the next phase of my life with full confidence," she continued. "I stand before you tonight confident, humbled and eternally grateful. Thank you for giving hope to that scared seven-year-old girl."

"Having spent my whole career in advertising, I've learned a thing or two about message," she began. "If I had one single word that makes up the essence of the Catholic Schools Foundation, that word would be 'hope.' Hope is what allows these kids to defy expectation. Hope is what propels them to overcome the hand they have been dealt."

"The message of the Catholic Schools Foundation and the ICSF is clear...I believe people understand this message of hope and how the work that's being done by all the people in this room is very vital," she said.

Following Kaplan's address, businessman and philanthropist Jack Connors was awarded the Carolyn and Peter Lynch Award "in recognition of his leadership, support and commitment to young people through Catholic education," according to the ICSF.

Peter Lynch, who presented Connors the award, noted that Connors has been involved with the ICSF since the beginning. He also praised Connors' 2010 Initiative -- an initiative whose aim was "to help the schools -- help the faculty, help with technology, improve the curriculum -- to make it a better facility," Lynch said. He noted that five years after the initiative was due to end, it has been renamed the "Campaign for Catholic Schools,"

"And John is still working on it every day," noted Lynch. "I don't know anyone we can honor more for helping Catholic schoolchildren, and all children really."

Connors said he was accepting the award not only on his own behalf, but also on behalf of his friend and fellow Catholic schools benefactor Tom Shields, co-founder and president of Shields MRI, who died days before the gala.

"As I think about this award tonight, given to me by Peter and Carolyn -- and accepted on behalf of my friend Tom -- I realize I've had a lot of luck, but the greatest luck I've had is by meeting people who are extraordinary and who care about other people," he said.

"Along the way we found these jewels -- the kids," he said.

Connors spoke of the Gospel of the Good Samaritan -- a scriptural passage that has guided much of his life, he said.

"The original inspiration is Peter Lynch," Connors continued, "but now it goes on to the next generation."