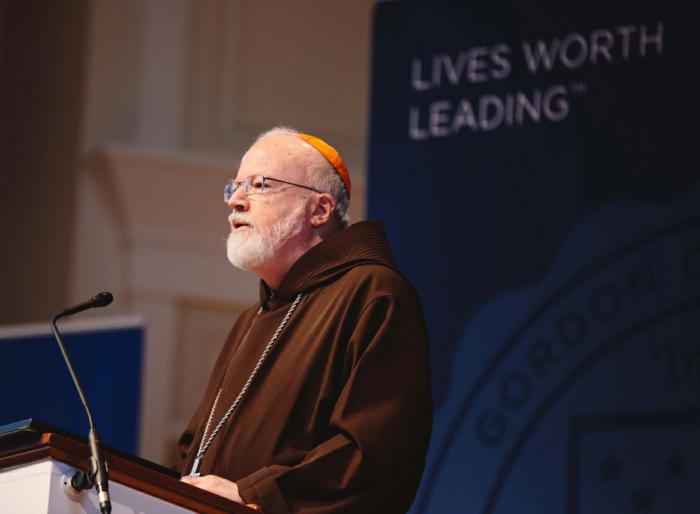 WENHAM, Mass. -- ''Tell us about your faith in Jesus Christ." That simple question on a college application had a profound impact on Dominic Paradis.

Paradis, a cradle Catholic, said that invitation demonstrated how faith pervades the culture at Gordon College, an Evangelical school in Wenham. He said of Gordon professors and staff, "They are genuine, virtuous and care about you."

Being surrounded by Christians with deep faith lives has in turn strengthened his own faith. It has also increased his desire for Christian unity. Paradis spoke with The Pilot following Cardinal Seán P. O'Malley's address for the 125th anniversary of Gordon April 20.

During that address, held at the A.J. Gordon Memorial Chapel, the cardinal said, "Today we must recommit ourselves to unity amongst Christ's followers."

He told the story of Franciscan missionaries to Papua New Guinea who converted natives. The natives embraced the Gospel but were scandalized when they discovered the divisions in Christianity. Their outrage showed that they were "better Christians" because they felt the pain of the division of the body of Christ. Many Christians have come to accept the divisions with complacency and indifference.

Cardinal O'Malley said Christians need to build a civilization of love together and that joining together in prayer and good works is a "wonderful place to start."

While introducing Cardinal O'Malley before his remarks, Gordon president D. Michael Lindsay read John 17:20, "I pray not only for them, but also for those who will believe in me through their word, so that they may all be one, as you, Father, are in me and I in you, that they also may be in us, that the world may believe that you sent me."

Cardinal O'Malley later picked up on that theme, talking about how Christian witness is harmed by the division between its members. In order to effectively combat the problems in our modern culture, all the baptized must work together to "bind the wounds of our world and build a civilization of love." We live in a world that is obsessed with celebrities who often lead superficial, self-absorbed and chaotic lives. The values of the current culture are more concerned with feelings and calculations than truths and principles. Ultimately, many people believe that the most important human virtue is "being nice."

"In the past, the polarity was often between Catholic and Protestant. Today, that has changed. The new polarity is believer and unbeliever. Hence, there is a certain urgency in renewing dialogue," he said.

He said Christians must be the guardians of goodness and beauty that shines forth from a life of service. They must work together to serve the poor in their midst. They must be joyful messengers of the Gospel. They must seek to emulate the lives of the saints who truly lived the Gospel and whose lives can touch people's hearts.

Later in the afternoon, a couple dozen students gathered around the fireplace at the Lane Student Center for a "Response and Reflection" on the cardinal's words.

Hannah Otto, co-leader of Gordon's Catholic Student Fellowship, said that while Christians cannot ignore their honest theological differences, it is "imperative" that they pray together.

"The question for Christians today is, how are we going to reconcile and do it without compromising the truth?" she said. "With time and prayer, the Holy Spirit will work out the differences."

Matthew Reece, an Anglican, said that he has many Catholic friends, and they get together to discuss politics and debate theology. He said those conversations can get "pretty heated" but indicated that they spark mutual understanding.

One of the things they all agree on is the importance of caring for the poor who represent the face of Christ. "Poverty is not an issue to be counted or quantified. It's people we should love and care for," he said.

"When we start with what unites us, it's easier to work on what we disagree on," he added, calling Christian division "one of the greatest tragedies of Western Civilization."