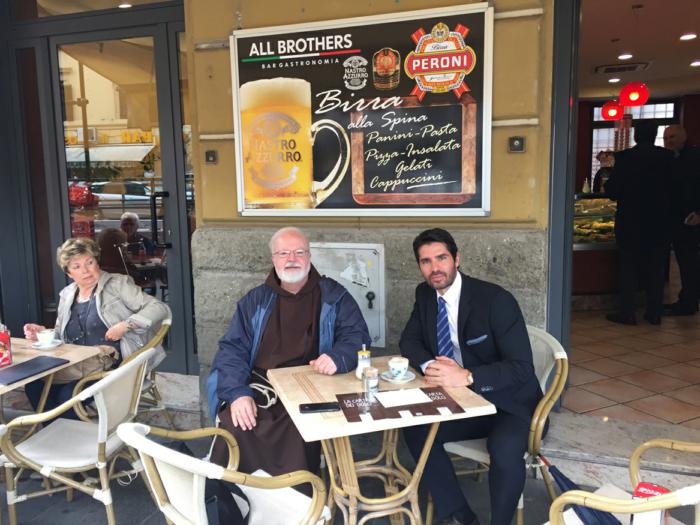 'Then Friday (4/17), by chance I happened to run into Eduardo in Rome ... and we had a cappuccino together.' Pilot photo/CardinalSeansBlog.org

Having just returned from meetings in Rome, I was sad to learn of the passing of Cardinal Francis George today. He waged a courageous battle with cancer while continuing to serve the people of God in his hometown of Chicago with love, humility and an abiding commitment to the Church. We all owe him a debt of gratitude for his outstanding service to the United States Bishops' Conference as our president. ...May his soul and all the souls of the faithfully departed rest in peace.

Also, I was very pleased to see that earlier today the Richard family expressed their view that the death penalty not be sought for Dzhokhar Tsarnaev. In addition to being in accordance with Catholic teaching, it also was the most merciful course of action for the families of the victims, who desperately need some closure. In the event that the jury was to hand down a death sentence, we know there would be many appeals and the whole process could drag on for many years.

...I left for Rome for meetings with the Holy Father. We arrived on Divine Mercy Sunday (4/12), just after the Holy Father had celebrated his very special Mass for the Armenians. The Holy Father's celebration was a very important one. I will also participate in an ecumenical service marking the 100th anniversary of the Armenian genocide at Trinity Church in Boston this week. That evening, I had a meeting with some of the subcommittee members of the Pontifical Commission for the Protection of Minors who wanted me to share some of their concerns about the situation in Chile with the Holy Father. We discussed that issue and a number of other concerns that are important to the commission.

The following day, the Council of Cardinals concelebrated Mass with the Holy Father at Casa Santa Marta and then we began three days of meetings with him. We discussed the new Constitution on the Curia, the proposals for new dicasteries and I also presented the Holy Father a proposal from the commission for child protection on a process for accountability of bishops.

As I always try to do when I'm in Rome, I met our Boston seminarians studying there for dinner. We had dinner together Tuesday night and were joined by Father Marc Bishop and Msgr. Francis Kelly.

Thursday night (4/16), the Pontifical North American College held the annual Rector's Dinner. The North American College now has over 250 students from all over the United States as well as Australia. This year the honorees were Robert Baker and Cardinal Pell. Cardinal Pell gave a beautiful address in which he talked about his love and respect for the United States and the American Church. He said that he doesn't know any seminary better than the North American College -- but I'm sure that's only because he hasn't visited St. John's Seminary in Brighton yet! He also said that Australians feel a great gratitude to the Americans because of World War II. He said, "Thanks to the Americans, Japanese is not my first language."

Eduardo Verastegui, one of the producers and the stars of the film Little Boy that I mentioned a couple of weeks ago, gave me a Spanish version of the film to share with the Holy Father. So, on Thursday I had lunch with the Holy Father, gave him the copy, and spoke to him about what the producers of the film are trying to do in creating films that have a positive message and demonstrate a Christian anthropology. The Holy Father was very interested to learn about this. Then Friday, by chance I happened to run into Eduardo in Rome, because he was there for the annual pilgrimage of the Papal Foundation, and we had a cappuccino together.