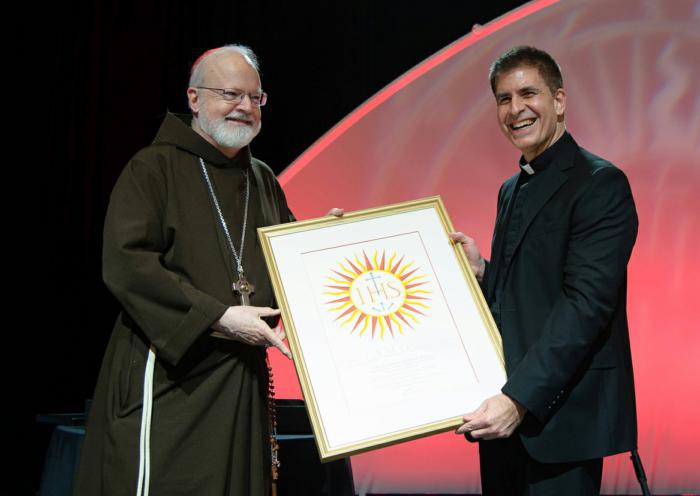 Jesuits of the U.S. Northeast Province recently honored Cardinal Seán P. O'Malley at their annual Jesuit Gala. About 900 people gathered for the annual dinner and fundraiser hosted at the Boston Marriott Copley Place on April 7.

Provincial Superior, Father John Cecero, SJ, presented the Ad Majorem Dei Gloriam award to the cardinal for his leadership both in the archdiocese and in his role advising their brother Jesuit, Pope Francis. The award's name is taken from the motto of the Jesuit order, Latin for "for the greater glory of God."

Past recipients of the award have included Cardinal Avery Dulles, SJ, Carolyn and Peter Lynch, and longtime president of the College of the Holy Cross, Father John E. Brooks, SJ.

"We're all here tonight because we love and admire the Society of Jesus and we're thankful for their presence, their friendship... their ministry that touches the lives of so many people. And here in Boston practically from the beginning of our local Church," said Cardinal O'Malley at the event.

"In today's world we hear a lot about second-hand smoke and collateral damage. But I think there is also such a thing as collateral benefits. Although my father wanted me to become a Jesuit, I never went to a Jesuit school," the cardinal said. "But I am the beneficiary of the outstanding Catholic formation that the Jesuits gave to my father, my uncles, my cousins, my brother. All of them became outstanding professionals with a great commitment to their faith, to the Church, their family, and the social gospels."

"The contributions of the Jesuit order to the civilization of the entire planet is a grace that we all benefit from," he added.

The gala helps raise funds for the province's works, which include forming and training new Jesuits as well as for their life-long care after a career of ministry. The province also supports a number of pastoral, social, educational, and international ministries. This year's gala raised $1.4 million and the event has raised more than $13 million since its inception.

"The support of all our friends...helps the Northeast Province in its mission of caring for and forming and helping souls," explained Father Cecero. "Our schools, parishes, and pastoral centers in Micronesia, Jamaica, and the Middle East rely on your support in their efforts directly to serve the poor."

It was the first time the Jesuit Gala, now in its 15th year, was organized by the USA Northeast Province which was formed this past December when, as a part of the order's Strategic Discernment Plan approved by Jesuit Father General Adolfo Nicolas, the New England and New York provinces merged.

"This new province will awaken a deep sense among Jesuits of belonging to the universal Society of Jesus--that we enter the Society not primarily to enter a regional province but to enter into the global mission and community," said Father Cecero.

Author of the New York Times bestseller "Jesus: A Pilgrimage" and editor-at-large for America magazine Jesuit Father James Martin acted as the evening's emcee. "I owe more than I can express to New England and am excited to be a part of the gala," said Father Martin. Though now based in New York at America's offices, he added: "Boston is my spiritual home."

The dinner was chaired by Chuck and Gloria Clough, Bill and Jackie Egan, and Jim and Lisa Mooney.

At the close of the evening, more than 40 young professionals in their 20s and 30s who are members of the province's Jesuit Connection group, attended an after-gala reception. The group plans social, spiritual, and service events for young adults in the greater Boston area who have ties to the Jesuits: through a Jesuit school or university, attending an Ignatian retreat, participating in Jesuit Volunteer Corps, or through other encounters with Jesuit values and teachings.