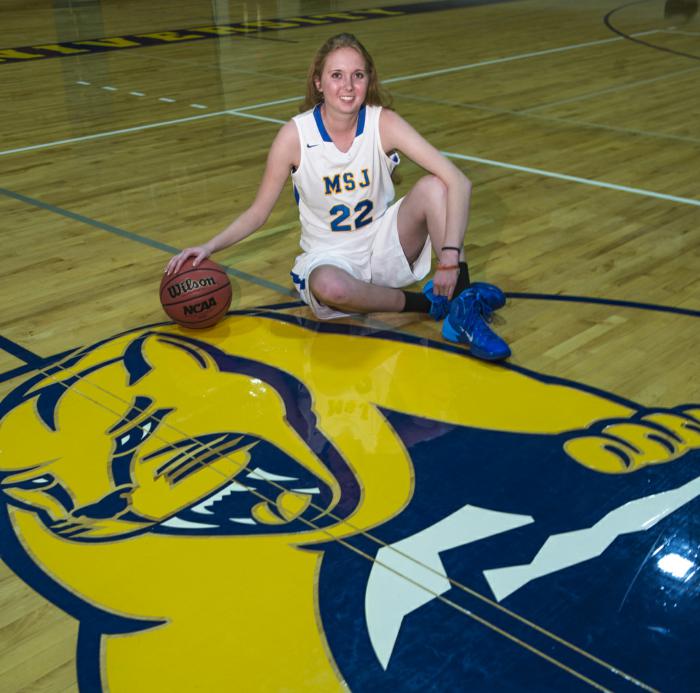 Ohio college basketball player Lauren Hill, who died of cancer April 10, is pictured in a 2014 photo. A student at Mount St. Joseph University in Cincinnati, Hill gained international attention when she decided to play on the college's freshman basketball team even as her inoperable brain tumor advanced. (CNS photo/courtesy Mount St. Joseph University)

CINCINNATI (CNS) -- Lauren Hill, a Mount St. Joseph University freshman who gained international attention when she pursued her dream of playing college basketball even as her inoperable brain cancer advanced, died overnight April 10. She was 19.

"Her light will continue to shine on us all as her supporters worldwide continue her mission of increasing awareness and finding a cure for DIPG," he said. "We are forever grateful to have had Lauren grace our campus with her smile and determined spirit. She has left a powerful legacy. She taught us that every day is a blessing; every moment a gift.

Hill rose to national fame Nov. 2 after Mount St. Joseph, a Catholic university, petitioned the NCAA to open the season early so that she could achieve her dream of playing collegiate basketball. Hill scored a layup to open the game, a highlight that has been viewed on YouTube more than half a million times.

Readers of TheCatholicTelegraph.com, the website of Cincinnati's archdiocesan newspaper, voted Hill's story the No. 2 story of 2014.

The university planned to hold an evening memorial service for Hill April 13.

"As Lauren's family and friends grieve, I am sure I speak for many who will choose to reflect on her incredible life with admiration and find ways to remember her selfless generosity," Aretz said. "We thank God for the gift of Lauren and thank her parents and family for the honor of allowing the Mount to be a part of her life. Her love and laughter will remain in our hearts."

Following her diagnosis, Hill worked tirelessly to raise money and awareness for research on her cancer with the Cure Starts Now Foundation, granting interviews and making appearances even as her conditioned worsened.

"We are saddened to hear that our friend Lauren Hill has passed away this morning," said a foundation posting on Facebook. "Our thoughts and prayers go out to her family during this difficult time. ... Throughout her diagnosis Lauren was a tireless advocate and spokesperson for the Cure Starts Now's efforts to find the 'homerun cure.' Lauren captured the hearts of people worldwide with her tenacity and determination to play in her first collegiate basketball game with her Mount St. Joseph University team."

In a commentary in The Catholic Telegraph last November, John Stegeman, the paper's new media editor, called Hill "a witness to life."

"Various reports suggest Hill has until December to live. It isn't clear," he wrote. "She knows the end of her life is coming, but she doesn't know when. In the time she has, she will live more fully than many of us ever do. Lauren Hill is truly dying with dignity.

"There is a school of thought in America that doesn't accept death. Some people would like to see cancer and other terminal patients try every last experimental drug until their final breath," he continued. "Others accept that a time comes when the miracle that is modern medicine can do no more to help, and at that time embrace palliative care. Still others advocate for the path of (Brittany) Maynard."

Maynard, 29, also had terminal brain cancer. She took a lethal dose of drugs to end her life in Oregon last November.

"I don't know exactly how I'd react to a terminal diagnosis. But I do have hope," said Stegeman. "Whenever I die -- be it sudden or prolonged, painful or painless -- I pray to God that I face it like Lauren Hill."