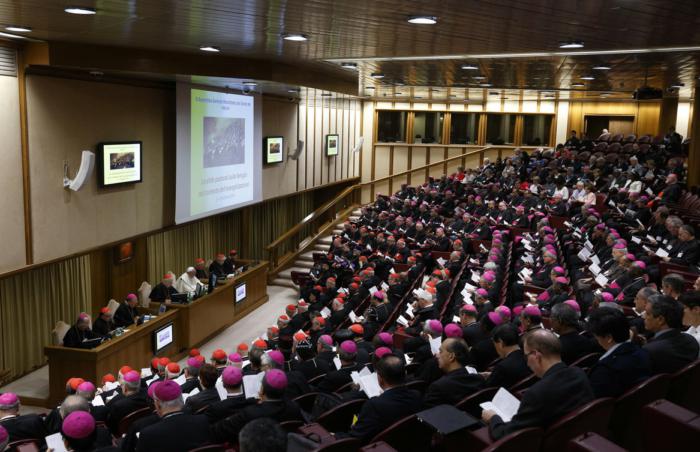 Pope Francis attends a session of the extraordinary Synod of Bishops on the family at the Vatican in October 2014. The 2015 synod will be held Oct. 4-25 in Vatican City. CNS photo/Paul Haring

BOSTON -- A short deadline from Rome and record snowfall in February presented challenges, but Father Bryan K. Parrish is pleased with how the archdiocese responded to the Holy See's request for input that will help the Church prepare for the 2015 Synod of Bishops on the Family.

"It's hard to get an exact read on it, but I'd say probably 40 to 50 percent of the parishes, I believe, participated. I think the pastors did a really good job, given the challenging conditions, in consulting with their people," said Father Parrish, the assistant vicar for administration, special assistant to the vicar general and moderator of the curia.

Father Parrish, who was also recently appointed as episcopal vicar and secretary for Parish Life and Leadership, told The Pilot that the feedback from parishes, as well as the Archdiocesan Pastoral Council and Pope St. John XXIII National Seminary, expressed a common theme and desire to effectively communicate the depth of Catholic teachings on marriage and the family.

"There was a real sense communicated of the beauty of Church teachings and the beauty of our Catholic faith and a real desire to ensure that the faith is handed down to the next generation, particularly with regard to family life, the dignity of marriage and the sacredness of the sacrament of marriage," Father Parrish said.

"I would also add there was a clear statement of the need to have a positive tone in how we communicate Church teachings. So in that regard, issues like outreach, being welcoming, offering support, accompaniment, all these were commonly used in expressing how we as a Church should be reaching out in communicating the beauty of the faith, particularly to those who are in difficult, challenging or unusual circumstances," Father Parrish added.

In December, the Vatican distributed a "lineamenta," or outline, to episcopal conferences around the world. The lineamenta -- in addition to having the 62-paragraph final document the Vatican published following the conclusion of last year's synod -- included a 46-question survey soliciting reflections on how to promote authentic family values, train clergy in family ministry and on how the Church can be present to people whose personal lives do not conform to Catholic moral teaching.

The feedback to the questions will help the synod secretariat in Rome compile the working document -- known as the "instrumentum laboris" -- for the 2015 synod. The instrumentum laboris will likely be published sometime before this summer.

Individual bishops were entrusted to figure out the best way to gather feedback from the faithful in their dioceses. In Boston, the archdiocese created a committee to facilitate discussions and consultations after an archdiocesan cabinet meeting in December.

Committee members paired the 46 questions into six broader questions, set up a website (www.synod2015.org) with videos explaining the lineamenta and synod, and also organized meetings throughout the month of February in each of the archdiocese's five regions to help parishes understand the consultation process.

Parishes were instructed to provide summaries of their consultations to their respective vicar foranes by March 1. Father Parrish, a member of the organizing committee, helped synthesize the parishes' submissions into a report he presented to Cardinal Seán P. O'Malley on March 13. In turn, Cardinal O'Malley sent his report to the United States Conference of Catholic Bishops, which needs to send its national report to the Vatican by April 15.

In his report to Cardinal O'Malley, Father Parrish said he noted a "real reflection" among local Catholics of the message of Pope Francis, who has shown an appreciation of the truth of Church teachings while at the same time emphasizing the importance on how those teachings are to be communicated.

"An important theme of Pope Francis' papacy has been listening to the faithful and trying to break through any ecclesiastical shells that can form around the curia," Father Parrish said. "His desire to consult with not just with bishops, but also the lay faithful, on these important family matters on how we can support family life and reach out and show support is quite striking.

"The faithful have not been used to being consulted to this degree by the pope," said Father Parrish, who added that the responses to the questionnaire will have immense value to offer the universal Church in Rome later this year during the synod.

"There is a great importance because there are common themes that are being echoed, certainly throughout the parishes in the Archdiocese of Boston and throughout this country, that echoed in Rome at the extraordinary synod," Father Parrish said.

"Many folks expressed gratitude that they were asked for their opinion," Father Parrish added. "There were common themes that bubbled up to the surface, and if you look at conversations that went on in Rome at the synod last year, much of that was a reflection of the responses that came forth. And I'm sure that is the case in other parts of the world."