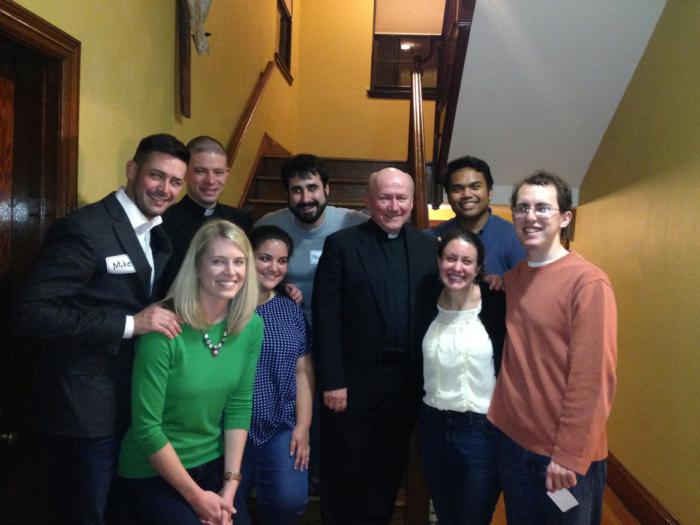 BRIGHTON -- A Brighton parish has created an outreach tool for the new evangelization that could become a model for similar young adult ministries elsewhere in the country, according to organizers.

Organizers said they created the St. Columbkille Young Adult Commission in Brighton with a focus on organization, structure and replicability. That meant creating a structure that other parishes -- or future generations at the parish -- could use as a guide. With an organized committee of volunteers from the Brighton Catholic community and a detailed set of by-laws providing structure, the young adult group organizes and hosts events and initiatives geared toward deepening young adults in their faith and relationships with each other, their parish, the Catholic Church, and Jesus Christ, according to the group's mission statement.

The program is even being looked at by National Leadership Roundtable for Church Management, an organization that encourages innovation and best practices in the Church in the U.S., which recently identified the young adult program at St. Columbkille's as a potential model for parishes hoping to develop a similar ministry.

"If there are parishes that are interested in learning more about excellent young adult programs, we can point them in the direction of a number of parishes across the country that have been creating young adult programs -- like the one at St. Columbkille's," said Katie Diller, coordinator of the Engaging Students To Enliven the Ecclesial Mission (ESTEEM) at the Leadership Roundtable.

With help from young people at St. Columbkille's, parish administrator Father Richard W. Fitzgerald and seminarian Tom Olson started the St. Columbkille Young Adult Commission in 2013 for people between the ages of 20-39 years of age. Imperatives and goals for the group focused on the need to reach out to the many working professionals, graduate students, and young families in the area.

Father Fitzgerald said when Cardinal Seán P. O'Malley first assigned him to the parish, the cardinal stressed the importance of outreach to young adults in Brighton through St. Columbkille's as part of the focus on parish life in the new evangelization.

When Olson first arrived at the parish in September of 2012, Father Fitzgerald saw an opportunity to build up a ministry of outreach to young adults facilitated by the presence of a young seminarian as a fixture of the parish.

"I recognized he had certain talents and organizational abilities. I thought, this is the time to try and do something," Father Fitzgerald said. "In other words, strike while the iron is hot, as they say."

Olson went about creating the group in an organized way that could be repeated in other parishes. Beyond organizing young adults to get together for social events Olson said the vision of the group centered on parish participation.

"I believe that the heart of the Church beats with the parish," Olson said.

Creating a group centered on the parish meant creating what Olson calls "buy-in" for those participating in the ministry -- the sense that individual members and the group leaders have a vested interest in the community at St. Columbkille's.

"From the very beginning I knew that if I was going to do this, it couldn't be just me. I had to involve others. I had to build a group of co-leaders," Olson said.

"We're all volunteers, actually, in the sense that we're doing this because this is something we want to do," he said.

He said leaders in the group needed a certain charisma, the ability to make a devoted commitment to the ministry and to attract other people to the ministry.

Once the idea caught on and the commission started to come together, the group drafted by-laws -- a detailed set of definitions and roles that formed the backbone of the group. Olson said the group aimed to be sure to include single and married young people along with himself, as someone in pursuit of a priestly vocation, to reflect the diversity of the demographics amongst Catholic young adults -- particularly in leadership positions.

Under the current by-laws of the commission, organizers run social, spiritual and service events.

Molly Kentala, a recent convert to the faith, works on publicity for the commission and plans social and service events for the group. The first social meeting happened at a local restaurant in 2014 and helped build a list of contact information to build up the group.

"We are looking for people who want to build community," she said.

Kentala said the nature of the young adult population in Brighton means that some people only live locally for a short amount of time.

"They are working on their undergrad degree. They're doing a master's program. They're here for a job. They're transitioning somewhere else. So, while they're here we found people want to make the most of their time, especially in the Catholic community. They want to be a part of something bigger than regularly attending Mass," Kentala said.

Organizers built a base for the group with social events and email lists early on, but soon the group began to reflect a truly Catholic dimension.

Paul Masur, a married man who helps with the spiritual component of the program, identified an overlap between the spiritual and social aspects of the group as it puts out an invitation to young adults of the community.

"We feel like we're meeting different needs, and I have heard feedback that people appreciate having something spiritually based to do during the week, so it's not just Mass on Sunday," he said.

For spiritual development, the group organizes Bible studies particularly around Advent and Lent. Often such events require an icebreaker, but maintain a sense of openness.

For his family, Masur said the St. Columbkille Young Adult Commission creates an avenue for their expression of the Catholic faith.

Masur said that it is nice to know, beyond Sunday Mass, "that we have people in our lives and we have a group in our lives that kind of brings the faith out."

Olson said eight members under Father Fitzgerald constitute the core committee that facilitates the welcoming environment at young adult events at the parish.

"We want to simply ... put an invitation out there to people to actually get involved in living their faith, I mean living their faith toward becoming disciples. That's what we're ultimately about. Of course, discipleship has to occur outside the parish," Olson said.

Father Fitzgerald said the group has impressed him so far with its organization and openness to young adults in the Brighton Catholic community.

"The thing I like about it is you see a nice mix of people, personalities, everything. Which I think is good. I think that's helpful," he said.