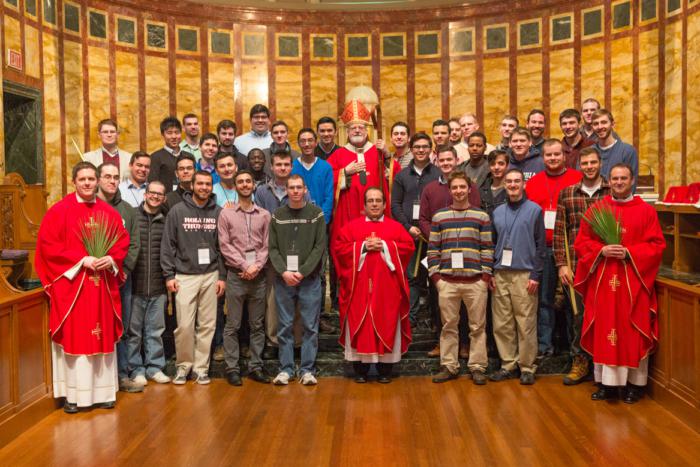 'This past weekend we had our annual retreat for men discerning a vocation to the priesthood, which is organized by our Office for Vocations.' Pilot photo/CardinalSeansBlog.org

This past weekend we had our annual retreat for men discerning a vocation to the priesthood, which is organized by our Office for Vocations. I was very pleased with the turnout; we had over 50 retreatants in total. The retreat has two "tracks," if you will. We have one group who would be possible candidates for Pope St. John XXIII National Seminary, the second-career seminary, and another group of younger men for St. John's Seminary.

I began by visiting with the men at Pope St. John Seminary. There were 12 retreatants with us and I celebrated Mass for them and then we had a conference. The other 40 or so retreatants began their retreat at the Betania II retreat center in Medway. I gave a series of conferences, and there were witness talks and a number of panels on vocations. A number of the seminarians came to assist in the retreat. On Sunday (3/29) the retreatants went to St. John's where we joined in the Palm Sunday Mass with the rest of the seminary family.

Also that day, I went to visit John Moynihan, a decorated Boston police officer who had been honored at the White House for his bravery during the Marathon bombings who had been shot in the face on Friday. Father John Connolly, one of our police chaplains, accompanied me. Officer Moynihan was in very serious condition, and we visited and prayed with his family and other police officers who had gathered at the hospital. We were there when he came out of surgery, which went well, and we are happy to hear that he has continued to improve.

Wednesday (4/1), delivered the invocation at the dedication ceremony for the Edward M. Kennedy Institute for the U.S. Senate. The President, Vice President and First Lady came to mark the occasion, along with many U.S. Senators and a number of local politicians including Governor Baker and Mayor Walsh. This new institute will be a tool to educate people about the functioning of the government. Students will be able to go there and learn how the committees are set up, and how our laws are made and debated. Of course there are many different exhibits, but the centerpiece is an exact replica of the U.S. Senate chamber. Obviously, the Kennedy family was interested in having some memorial to the Senator but doing this as a way of teaching about the senate, I think, makes a great contribution to our community.

Tenebrae at the cathedral

On the evening of Spy Wednesday, we held our celebration of Tenebrae at the cathedral. During Holy Week, we are called upon to publicly celebrate some of the Liturgy of the Hours with the community, and I always like to use the celebration of Tenebrae as an opportunity to do that. The service is essentially the Office of Readings for Holy Thursday and recounts the story of Jesus' betrayal and death. The service begins with a large candelabra, called a "hearse," with many candles. As the story progresses, they are slowly extinguished until we are left in complete darkness. Then the organ plays what is called the Strepitus, which is deep rumbling -- the kind of sound you feel more than you hear. There are many different interpretations of what its meaning. Many think it represents the earthquake at the time of Jesus' death.