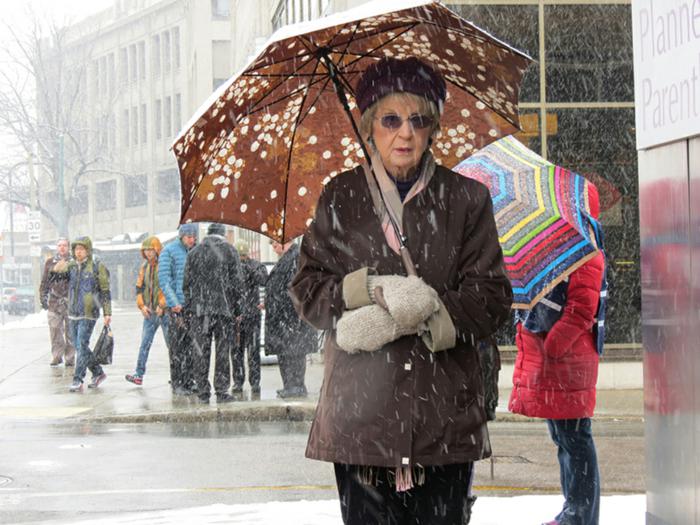 Ruth Schiavone awaits the opportunity to speak with women outside the Planned Parenthood in Boston on a snowy March 21. Courtesy photo

In addition to prayer, fasting and peaceful witness, 40 Days for Life Attleboro needed an additional tool for this spring's campaign -- a snow blower.

On two separate occasions, Ron Larose transported his own snow blower for the job of carving standing room out of the four foot snow bank across the street from Four Women Health Services, the only abortion clinic in the Diocese of Fall River.

Campaigns across Massachusetts encountered record-high snow banks and record-low temperatures. Despite the "dangerously cold" wind chills, someone came to the Attleboro vigil every day of the campaign. The witness of volunteers on even the most difficult days communicates their commitment to the cause of life, Larose said.

The first 40 Days for Life was conducted in College Station, Texas in 2004. Since then, 650,000 people have participated in 559 cities and 27 countries. Records show 107 workers have quit the abortion industry and 60 clinics have closed. This campaign also marked an important milestone -- over 10,000 lives have been saved during 40 Days campaigns.

The inclement weather during this spring's campaign meant sacrifice for participants across the country. The sacrificial love that drives participants also saves lives, according to Shawn Carney, the national campaign director.

In an e-mail to supporters on Feb. 19, he wrote, "Sacrificing your time -- and warmth -- can make quite an impression on a mom who's arriving for an abortion. It's often the case that the locations with the worst weather have more women turn around and leave without having an abortion. The willingness of strangers to be out in miserable conditions speaks to the heart of women at that most crucial moment."

Rita Russo, 40 Days Boston coordinator, said that the need for prayerful witness is unrelenting -- much like this winter.

"The vigil will be challenging, but babies are still dying there, despite the weather," she said in an e-mail to supporters before the start of the campaign. "It is up to us to show the world that these babies' lives matter. They have no voice but ours."

Larose, 40 Days Attleboro coordinator, said that participants willingly offered up the extra sacrifices of this campaign for the women and children.

"It was part of my Lenten sacrifice to be out there in the cold," he said. "As with all sacrifices, we know it to be more efficacious the more difficult the circumstances."

Larose said that the snow has never been higher at the Attleboro vigil site, Angell Park, a narrow strip of grass between divided Highway 118. Pay loaders clearing the many intersections in the area dumped snow in the park and added to the height of the snow banks.

"There really is no place to stand -- even now -- in the park," Larose said last week. "The area facing the clinic is still snowbound."

Larose added that the snow banks actually came with some benefit. Larose used them as a perch so that he would be more visible with his three foot by seven foot sign that read "PRAY TO END ABORTION." The snow banks also shielded participants from the brunt of the winds.

"It's never been this bitterly cold for this extended amount of time. Below zero temperatures are fairly rare -- even wind chills, but for the first three weeks of the campaign, that was the norm," he said.

On his first day at the vigil site, Larose wore five layers, foot warmers and insulated boots. After he finished praying and went inside, it took nearly four hours for him to warm up. Later that day, he made an "emergency purchase" of below zero rated boots and thermal underwear.

Paul Zabrinski, participant at 40 Days Attleboro, said that in the end it is the children, not the weather, who matter. He called the lives lost at the clinic "devastating" and said that witnessing outside serves the important purpose of praying for all who go there.

"We're toughing it out," he said of vigil participants. "They call it a clinic. It isn't a clinic. They don't help anybody. They're there to destroy; that's all."