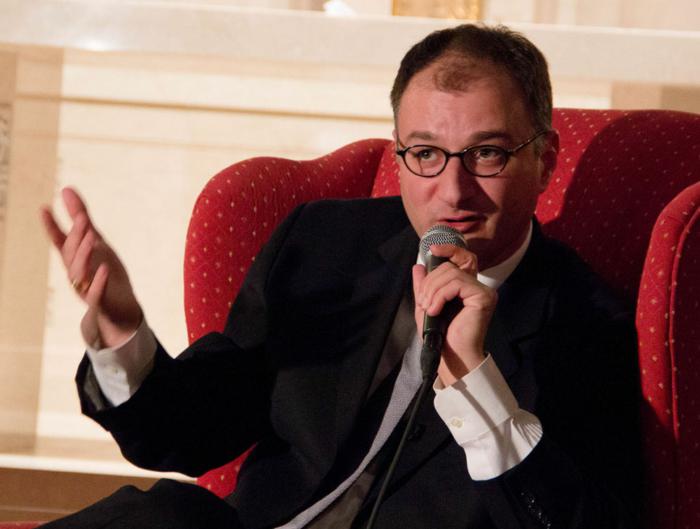 Rocco Palmo, author of the Catholic blog Whispers in the Loggia, speaks at St. John's Seminary's Our Lady of the Presentation Lecture Hall and Library March 23. Pilot photo/Christopher S. Pineo

BRIGHTON -- St. John's Seminary rector Msgr. James P. Moroney hosted Catholic blogger Rocco Palmo at Our Lady of the Presentation Lecture Hall and Library, March 23, for a wide-ranging public discussion on a changing Church during the rise of the Catholic blogosphere and a new papacy.

Palmo has become a kind of unofficial news source for churchmen over the years since launching his blog "Whispers in the Loggia" in 2004.

"Rocco and I knew each other very well when I was at the bishop's conference, and to this day he is the first person I listen to every morning when I turn on the Internet. I'm one, I have to confess, of the 20,000-something people who follow not only his Twitter feed but almost as many who hit his blog every single day," Msgr. Moroney said.

At the public sit-down discussion -- attended by priests, seminarians and lay people -- Msgr. Moroney and Palmo touched on many issues including the rise of Palmo's blog, a changing media landscape in the Church, and the advent of Pope Francis in the context of an interconnected world.

Palmo thanked the audience as the event began, and said the format -- two chairs at the front of the hall with Msgr. Moroney posing questions -- directly related to the tough winter this year in Boston.

"Monsignor wanted me to do a standup talk, and I said the people of Boston have had enough to numb their brains with this winter you've had. I don't know how you guys have gotten through it," Palmo said.

He first spoke about his relationship with the faith growing up in the Archdiocese of Philadelphia.

He explained the influence of his family, his grandmother and Cardinal Anthony J. Bevilacqua in his early life. He said the elevation of Cardinal Bevilacqua piqued his interest in the Church, and prompted a relationship with the Church and the cardinal that opened doors to the priests, religious, and laypeople that make an archdiocese work.

He called the faith passed on from a kind of "Golden Age of Catholicism" of generations before into troubled times that followed "a darkened Church, only lit by so many people as are in it," comparing it to the candlelight procession of the Easter Vigil.

Msgr. Moroney coaxed Palmo ahead in his anecdote to the years when Palmo started the blog.

Palmo spoke about a changing Church as technology advanced and connectivity between people through the Internet grew. He said that though the Church had mastered the 20th century media of radio and television, it was challenged to move on to digital, and later social, media.

"It was a different generation at the top at that time, a generation that had not come from smart phones. Remember, 10 years ago smart phones were only in the hands of a small number of the population," Palmo said.

To emphasize the technological transition Palmo spoke of the late Cardinal John P. Foley, who for many years headed the Pontifical Council for Social Communications.

"John Cardinal Foley, for 26 years as many of you know, was the voice of Christmas -- you know the narrator for the Holy Father's Mass on Christmas eve -- and was the man who pushed the Vatican into new technology, or at least the first wave of it, but who never read through his own email on a computer. All his email was always printed out for him," he said.

Palmo said the sense of immediacy in the new media landscape can exaggerate controversy or simply distract from the Catholic discourse in blogs and social media.

"I don't see much about the faith sometimes, but I see they take pictures of their dinner and put them up. I don't know what I would rather have; people fighting about substantive things or putting up dinners. I find neither appealing," Palmo said.

But for all the possibility of derailment, Palmo also identified an important opportunity to engage the world through traditional media, new media, and in person -- the upcoming visit of Pope Francis to the United States.

"Especially here in a place like Boston, where the Church has been hungering for good news these years and the seminary has been such a bright spot to the life of the diocese, this is show time for all of us. This is prime time, Oscar night, Super Bowl, March Madness -- you take your pick with the analogy. The eyes of the world, and the eyes of this entire country, will be on the Church," he said.