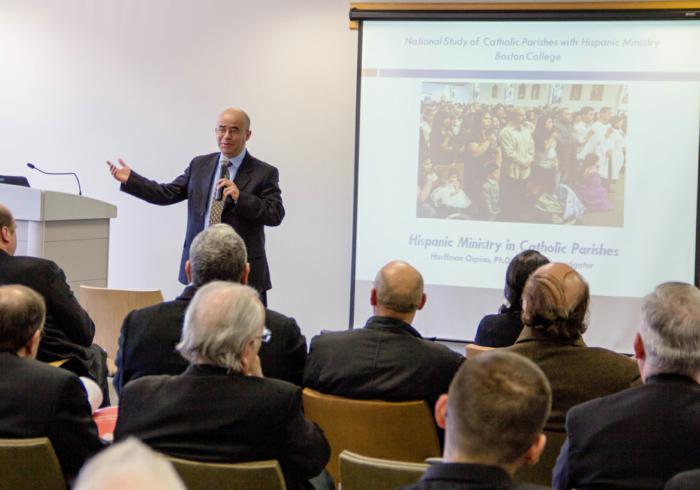 BRAINTREE -- According to Boston College professor Hosffman Ospino, the face of the Catholic Church in the United States isn't just looking more and more Latino, that face is getting younger, speaking English, and increasingly disconnecting from the Catholic Church.

Ospino, director of graduate programs in Hispanic Ministry at BC, gave his talk "Hispanic Catholics in the Transformation of the American Catholic Experience" at the Pastoral Center in Braintree, March 19, for members of the Presbyteral Council and Cardinal Seán P. O'Malley.

"We're very, very grateful to have you here and we're interested in your reflections," the cardinal said as he introduced Ospino.

The cardinal had personally invited him to address the presbyteral council about a major three-year study Ospino led called "National Study of Catholic Parishes with Hispanic Ministry." Completed in 2014, the study showed the demographics of the U.S. Hispanic and Latino populations relate -- and will relate -- the Catholic Church.

He said today's young adult Hispanics and Latinos, the potential parents of a large portion of future Catholics in the United States, use English as the language of their day-to-day lives.

"For instance, in the Archdiocese of Boston the 35 or 40 parishes that do Hispanic ministry primarily work with immigrant populations. But of course, the truth is that two-thirds of Latinos in this country are U.S. born," he said.

"The U.S. born Latino community lives in something that we could call a pastoral limbo," he said.

Ospino said as a result of cultural changes, a combination of English and Spanish, called "Spanglish," has started to outpace the growth of Spanish in the United States.

"Sixty percent of all Catholics in this country under the age of 18 are Hispanic," he said.

He said these groups increasingly follow tendencies from the U.S. in their cultural development as a demographic, particularly the tendency to walk away from the Church.

According to Ospino, the Church stands to incur significant consequences if the exodus goes unaddressed or continues unabated.

"If we don't educate this next generation, the Catholic Church for the first time will see major weakening," he said.

"The conference of bishops has two resources that they are currently running. One is a major workshop on intercultural competencies for leaders in ministry," he told The Pilot after his talk.

"They just released another resource called Best Practices in Shared Parishes. What they do is they highlight the good work that is being done in parishes nationwide to bring people together and also to raise awareness even in parishes that still do not have much diversity, but most likely down the road will be welcoming communities from different languages," Ospino said.

The workshops and related policies are available on the USCCB website under the Issues and Action tab option labeled Cultural Diversity.

For some priests at the talk, the perspective looked more closely at a reality they face in their daily lives.

Father Thomas K. Macdonald, who serves at St. Ann and St. Brendan in Dorchester, said the talk gave valuable insight for a priest serving at a parish level.

"It was really important for us to hear the challenges and the opportunities that face the Hispanic community in the Archdiocese of Boston. I felt personally challenged to begin to think outside of the box in ways of addressing those challenges," Father Macdonald said.

Father John F. Mulloy, parochial vicar at St. Joseph's in Malden, spoke about the importance of the presbyteral council hearing the talk.

He said the cardinal wanted the council exposed to the information presented.

"It was a very informative, insightful and challenging presentation," Father Mulloy said.