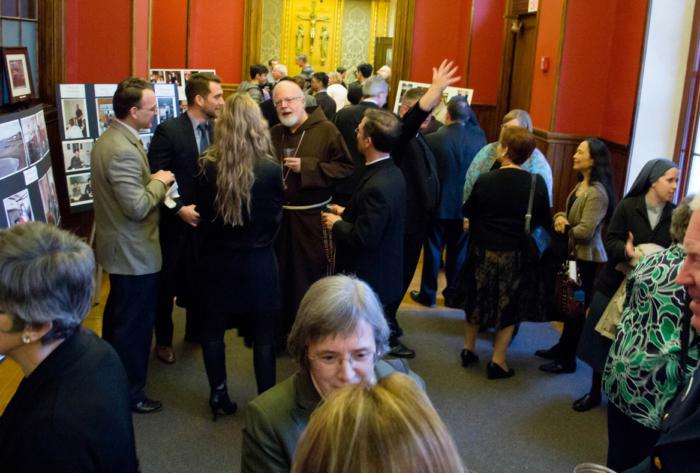 'Saturday (3/21) I went to St. John's Seminary for the 15th anniversary celebration of their Masters of Arts in Ministry program.' Pilot photo/CardinalSeansBlog.org

In the afternoon, I met with the local leadership of the Catholic Daughters of America. The Catholic Daughters have been so supportive of the pro-life activities of the archdiocese and they came to bring a contribution for our Pro-Life Office supporting women in difficult pregnancies. I have long been a supporter of the Catholic Daughters and have tried to promote membership in their organization at our local schools and colleges whenever I can. I urge you to find out more about them at www.catholicdaughters.org.

With an eye towards development efforts on behalf of the expansion of our Redemptoris Mater Seminary, we had vespers and dinner for supporters at the seminary in Brookline. One of the initiators of the Neocatechumenal Way, Kiko Arguello, very graciously sent me one of his latest artistic endeavors, a beautiful icon of the Pieta. It was a wonderful symbol to receive during this Lenten season.

Saturday (3/21) I went to St. John's Seminary for the 15th anniversary celebration of their Masters of Arts in Ministry program. For the celebration, they invited back all the alumni. The evening began with a Mass. The Chapel was full; they had probably about 200 people there. Following the Mass, there was a banquet in the refectory. Awards were given to three graduates for their outstanding achievements -- Craig Gibson, Sister Janet Ryan and Jay Fadden. We congratulate them and all those who have been involved in the MAM program over the years for reaching this important milestone. In particular, we are very grateful to Aldona Lingertat and Father Chris O'Connor for all their great effort to make this program so successful.

Mass with the Marist Missionary Sisters

The Marist Missionary Sisters have been holding an international meeting for their order at their house in Waltham, and on Monday (3/23) and I was happy to celebrate Mass for them and join them for lunch. The Mass was celebrated mainly in French because they had sisters from all over the world and French was the language they most had in common. It was very good to see Sister Georgeanne Marie Donovan, who is their superior general who was here from Rome.

Wednesday evening (3/25), we had one of our periodic meetings of the Archdiocesan Pastoral Council. The APC is a very important sounding board for the archdiocese. It is way of hearing the perspective of the various religious communities, the deacons and particularly our lay leaders from throughout the archdiocese. We are very grateful to Sister Marian Batho for the wonderful job she does organizing the APC.

Finally, this week I was given the opportunity to screen the film Little Boy, which I found very moving. The film is about a family during World War II. It speaks of the havoc that the war wreaked on this family, but also the importance of faith and works of mercy. ...It has a wonderful message and I feel it's the kind of film that anyone in the family would enjoy. Unfortunately, when independent films like this are made they often don't have the same kind of advertising budgets that big studio films have, so it's up to us to spread the word -- and this is a film with a message that deserves to be spread.