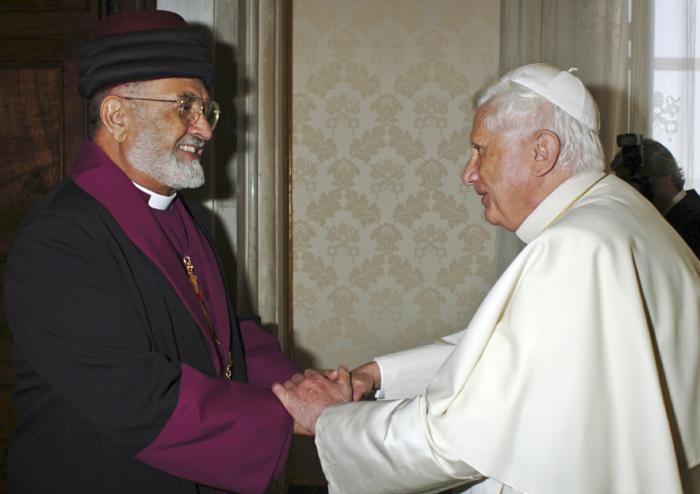 Catholicos Dinkha IV, patriarch of the Assyrian Church of the East, is greeted by Pope Benedict XVI in 2007. Patriarch Dinkha died March 26 at the Mayo Clinic in Rochester, Minn. A virus infection and pneumonia were cited as the cause of death; he was 79. (CNS photo/L'Osservatore Romano via Reuters)

CHICAGO (CNS) -- Catholicos Dinkha IV, patriarch of the Assyrian Church of the East, died March 26 at the Mayo Clinic in Rochester, Minnesota. A virus infection and pneumonia were cited as the cause of death. He was 79.

In a message of condolence sent to the temporary head of the church, Pope Francis offered his prayers for the deceased patriarch and said, "The Christian world has lost an important spiritual leader, a courageous and wise pastor who faithfully served his community in extremely challenging times."

Pope Francis said he knew from his conversation with the catholicos how he "suffered greatly because of the tragic situation in the Middle East, especially in Iraq and in Syria, resolutely calling attention to the plight of our Christian brothers and sisters and other religious minorities suffering daily persecution."

Catholicos Dinkha was born Sept. 15, 1935, in Iraq. He was ordained a priest at age 21 and became a bishop just five years later. He was elected patriarch in 1976, at the age of 41, succeeding Catholicos Eshai Shimun XXIII, who was assassinated a year earlier. Catholicos Dinkha was the first patriarch to be elected; traditionally, succession was from uncle to nephew.

Because of political instability in Iraq, Catholicos Dinkha moved the patriarchal see in 1980 from its ancestral homeland in modern-day Iraq to suburban Chicago in the United States, where a growing diaspora community was located.

Religious leaders offered words of condolence on the patriarch's death.

"We pray for his soul. We pray also that the fathers of the Assyrian Church of the East will elect a new shepherd who will lead the flock during this crucial time when Christians are persecuted in the Middle East and our Syriac-Chaldean-Assyrian people are being persecuted and forced to be displaced from their homelands," Syriac Orthodox Patriarch Ignatius Aphrem II of Antioch said in a statement to Catholic News Service.

"With great hope, we look forward to working together with the Assyrian community for the good of our people and a brighter future for all, following the footsteps of the late patriarch," he said.

Syrian Catholic Patriarch Ignatius Youssef III Younan told CNS in an email that he last met with the late patriarch in May at the Russian Patriarchate in Moscow.

"We then had the chance to discuss the tragic situation of Christians and other minorities in Iraq, as a sinister prelude of what will happen in Mosul on June 10 and in the Plain of Niniveh on the night of Aug. 6-7," Patriarch Younan recalled, referring to the invasion of northern Iraq by Islamic State militants.

"He was equally concerned about the ongoing exodus of his church's membership to the point to fear that a time would come when Iraq and Syria will be emptied of Christians," Patriarch Younan added.

"Let us pray that the Lord inspire the Holy Synod of the sister church that they may elect a successor filled with wisdom, energy and charisma enabling him to defend the very survival of the Church of the East, either in the Middle East or in the diaspora," he said.

Catholicos Dinkha has been credited with rebuilding the church and updating the liturgy, translating portions from classical to modern Assyrian. He was esteemed as a fatherly figure and as a strong promoter of ecumenism. The Assyrian Church of the East is not in communion with any other churches, either Catholic or Orthodox.

During his 39-year term, he met with St. John Paul II, Pope Benedict XVI and Pope Francis, the latter Oct. 2, just five months before his death. Catholicos Dinkha and St. John Paul II signed in 1994 the "Common Christological Agreement between the Church of the East and the Roman Catholic Church," which expressed the two churches' common faith in Christ's incarnation. The two churches have a long-standing theological dialogue.

The majority of the Assyrian Church of the East's faithful lives in the diaspora, mostly in the U.S. -- about 300,000 -- but also in Australia and Europe.

Metropolitan Aprim Mooken of India will serve as acting patriarch until a successor is elected.

A wake for Catholicos Dinkha was to be held April 7 at St. Andrew Church in Glenview, Illinois; the funeral will be held the following day at St. George Cathedral in Chicago.

Contributing to this report were Laura Iaeraci in Rome and Doreen Abi Raad in Beirut.