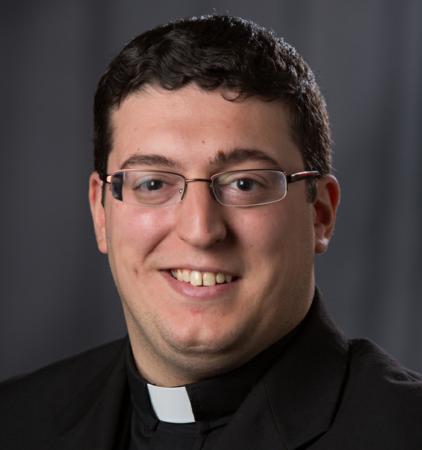 What are some of the factors that led to your decision to enter the seminary and discern the question of a vocation to the priesthood?

My Catholic faith has always been very important to me. I really began the basic discernment of a vocation to the priesthood at the very young age of 8. I have always felt drawn to the priesthood. What really becomes fascinating about my own journey and ultimate decision to enter seminary is that my vocation wasn't inspired by a person, or by someone's invitation to consider the priesthood. I have always felt in my heart a pull, that I truly believe came from the Lord, to be a priest. I don't come from a practicing Catholic family, and usually went to church as a pre-teen and teenager by myself, or with a few friends. So the pull and desire to be a priest came first strongly, and internally, in my heart and therefore, I answered that call from God, and entered the seminary.

Who are some of the people who influenced your decision to enter the seminary? What is it about them that assisted you?

My family always encouraged me. They didn't always understand the calling and still ask many questions about it, but they never discouraged me and always told me to do what would make me happy. I am blessed to have a very supportive family. There is one priest in particular who was very instrumental and encouraging and that priest is Father Paul Soper, currently the director of Pastoral Planning for the Archdiocese of Boston. I first met Father Paul at my home parish (Blessed Mother Teresa, Dorchester) when he was the pastor there. He was always willing to talk with me about discernment and helped with his words of wisdom and by his own priestly identity. His priesthood inspired me to answer the call I had always known was there.

What would you say is the role of prayer in the life of a seminarian and what effect does it have on one's ability to see God's call?

I would describe prayer as the heartbeat to the spiritual life. Without prayer, the spiritual life is dead, and therefore the seminarian's (or the priest's) personal and intimate relationship with the Lord can be lost and the person's ability to see God's call can be blurred. I believe that without prayer, the seminarian and the priest's life can be attacked by laziness and indifference, which can negatively impact the ministry they do. The seminarian and the priest must spend time in prayer. From my own personal experience, it isn't always easy to pray and some days it can feel like a chore instead of time with God, but I know that prayer is the base that supports everything else I do in my day. When I do pray, and when I do spend time speaking with God in the silence at adoration, or in praise with music, or at the Mass, I am able to feel the confidence that I am going in the right direction in my life, and I can clearly see God's desire for my life. Right now, I feel confident in my path.

What advice would you give to a man who is thinking about his vocation and is considering that God may be calling him to be a priest?

First, I think that every male Catholic should consider whether or not the Lord is calling them to the priesthood. For those who feel that God may be calling them, I would first echo the words Pope John Paul II made famous, "Do not be afraid." I would also advise that the man talk to family and friends about the idea, to spend as much time as possible in prayer and to attend daily Mass. I would also suggest that he begin to discuss the calling with a trusted priest who can help him in his discernment. God calls many types of people with a variety of personalities and abilities. Any young or older man who thinks they are called should not ignore it, but explore it as soon as possible with sincerity and trust in God's plan.

What do you like most about being a seminarian?

A priest friend once told me that the seminarian is one of the main and clear signs of hope for the future of the Church. The thing I like most about being a seminarian is that I am able to meet so many people and share my story of faith and discernment with others. As a young seminarian in 2011, so many young people find my decision to enter the seminary to be fascinating. I have really enjoyed spending time with young people as a seminarian, trying to inspire them to be active participants in their church communities, and also inviting some of them to discern a calling to the priesthood or religious life themselves. The seminarian can make a huge impact on the lives of young people- not only signs of hope, but signs that can inspire.

What do you think is the greatest challenge facing a man who is considering the seminary?

In my opinion, and from my own experience, one of the greatest challenges facing a man who considers the seminary is the fear that can creep in. One can psych themselves out or feel that he is unworthy or unable. The devil itself can try to discourage a man's considerations as well and one must be aware of that. However, I think that despite our attempts to question this calling or to sometimes fear it, if we trust in the Lord, and give him the lead, he won't bring us to a place unless he needs us there.

Seminarian Spotlight is a collaborative effort between The Pilot and the Archdiocese of Boston's Office for Vocations to introduce readers to the men preparing for priesthood in the archdiocese. More seminarian profiles and information on discerning a vocation are available at www.VocationsBoston.org.