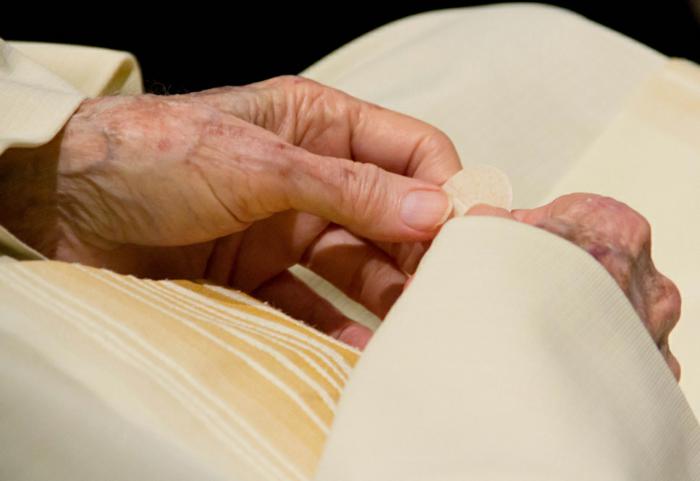 BRAINTREE -- Easter brings with it the opportunity to support those who have tirelessly served the faithful over the years.

The Clergy Health and Retirement Trust seeks support from the faithful at a few key times each year. Annual parish collections on Easter, Christmas, and during the month of September --combined with financial support from the annual Celebration of the Priesthood dinner -- contributes 60 percent of the trust's annual funding. The remaining 40 percent comes in through a medical insurance assessment for all active priests paid for by their parish or other assignment.

Joseph D'Arrigo, executive director of the Clergy Health and Retirement Trust, spoke with The Pilot March 24 about the work his office does in keeping the priests of the archdiocese healthy both physically and mentally.

"We're very aggressive in trying to keep our guys healthy, but both active and retired guys are going to get sick," he said.

"In the next 20 years, we will have 265 new men becoming senior priests. So, the Clergy Fund looks to do two things. One is to make sure we have enough funds to pay for all our priests out in the future. The second thing that we do is to continue to look at not only paying for their medical costs and their retirement stipends, we look to better their quality of life," D'Arrigo said.

When the archdiocese appointed D'Arrigo in 2008, he brought with him more than 40 years of experience in the field of healthcare benefits. He said the money that comes in each year also supports initiatives focused on maintaining quality of life and healthy living.

"Those are the kinds of things that the clergy fund is doing. That's where the money is going. It is not only paying the bills, but it is providing for the seniors and the active priests an emphasis on their quality of life," he said.

According to D'Arrigo the per capita expenses for both active and senior priests are trending down at this time. Even as the overall expense goes down, the amount that the fund spends on prescriptions for priests has gone up. For D'Arrigo, even the increased prescription costs is a positive sign, most likely indicating that priests are being more diligent about taking their maintenance medications.

"Our drug bills are going up a tad, the same number of people are taking them. That hasn't gone down, but our medical costs are going down," he said.

The trend relates to a wellness program instituted by the archdiocese in 2010, according to the director.

"Wellness is hard to calculate. It's a fact in most corporations. However, we're seeing a dramatic shift in the longevity of our priests, and our medical costs year-over-year, interestingly enough, are coming down," he said.

Health care coordinator Mary Hanlon, a registered nurse with more than 10 years of experience, created a healthy lifestyle program specifically for priests in the archdiocese aimed at helping them stay healthy through prevention, education, and outreach. That initiative created a focus on tracking and encouraging factors that promote healthy living amongst the clergy.

"Now, since we have been doing it for a number of years, we have a baseline on them. So, we know how active they are," D'Arrigo said.

Regular interaction lets the office know when a priest stops celebrating the Mass, hasn't been out and about with other priests for a while, or has stopped leaving the house.

D'Arrigo said the fund office also makes efforts to help the active priests remain healthy physically, but also mentally. For active priests, the office has provided seminars on topics such as stress reduction and conflict resolution.

He said Regina Cleri, the home for retired priests in Boston, not only provides excellent service to the priests but also allows the fund office to track information for analysis against industry standards at comparable facilities like assisted living facilities and nursing homes.

Regina Cleri has exercise programs, brings primary care physicians to the facility, and helps residents maintain compliance with their prescribed healthcare treatments. He highlighted these aspects of the work at Regina Cleri and also pointed out that the facility provides ongoing formation for priests living there. He said some priests choose to face their final hours on earth at Regina Cleri amongst their brother priests.

"It would be almost impossible to replicate the spiritual dimension of that place," D'Arrigo said.