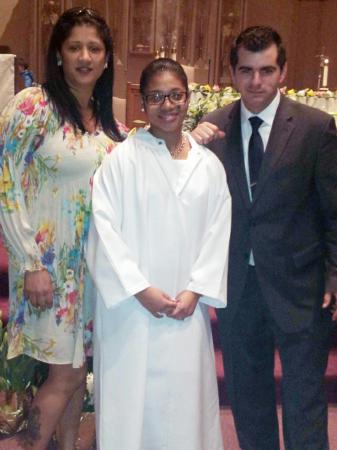 Ariela Reynoso, pictured with her godparents Ana Dominguez and Marcos Enrique, received the sacraments of baptism, first Communion and confirmation through a special program for teens. Courtesy photo

Ariela Reynoso said she had always wanted to be baptized, but as a young person without a faith community, she did not know where to start.

"I never had the person to go and talk about it," she said. "I've always wanted to get more involved with the Church."

That all changed in her senior year at Cristo Rey Boston High School in Dorchester. She joined a new program, designed to bring youth to the faith, and received the sacraments of baptism, first Communion and confirmation in 2013.

In its first year, this Rite of Christian Initiation of Adults (RCIA) program, hosted by St. Thomas Aquinas Parish in Jamaica Plain, had over 50 members, the majority of whom were students from Cristo Rey.

Marcos Enrique said that he started the program with Father Carlos Flor at St. Thomas because he knew many teens who were interested in receiving the sacraments. Most had no previous religious instruction and were too old for CCD; they also had different needs from the people served in the parish's main RCIA program.

"We saw a very clear void in ministering to those young people, and, seeing this need, we responded in the best way we could," he said.

Reynoso was the first teen to sign up for the program, and she heaps praise on it, remarking that she would love to be a part of it again. She said she learned a lot and met great people who were more than a community; they were like family.

"It was the best experience for me. It changed me to be a better person," she said. "I knew why I was doing it. I wanted to be closer to God. I wanted a better life for myself."

Reynoso was born in the Dominican Republic, but moved to the United States before her first birthday and has lived in the Dorchester area for over 20 years. Currently, she works two jobs and attends Bunker Hill Community College.

When she was very young, Reynoso went to church on Sunday. Her desire to know God began there and grew over the years. She felt inspired by her experience in Catholic school and said, "I wanted to feel like I was part of my community."

Reynoso said she was happy to receive the sacraments and glad that she had completed the program. There were times when it was difficult to continue because of her hectic schedule, but she persevered.

"Before, I usually gave up on stuff easily," she said. "This time it was just different. I set out a goal for myself and finished it."

That year she also graduated from high school with "excellent grades." She said her senior year was stressful but she kept her faith and now knows she can keep her faith through anything.

Recently, her mom had surgery, and Reynoso cared for her. Her first reaction to the difficult news that her mother would need an operation was to question God. She said she prayed, "Why God? Why me? You don't love me?"

"Then, I just sat down for a second in the waiting room of the hospital, and I just started thinking back to what the Church says, and I was like, 'I can't blame him. He loves me regardless, and he's going to watch over my mom,'" she said.

Her mom had surgery on March 3 and continues to make progress in her recovery.

Reynoso encourages others to join RCIA. "I would tell them to give it a try for a few classes," she said. "If they experience it, I know they'll stay."