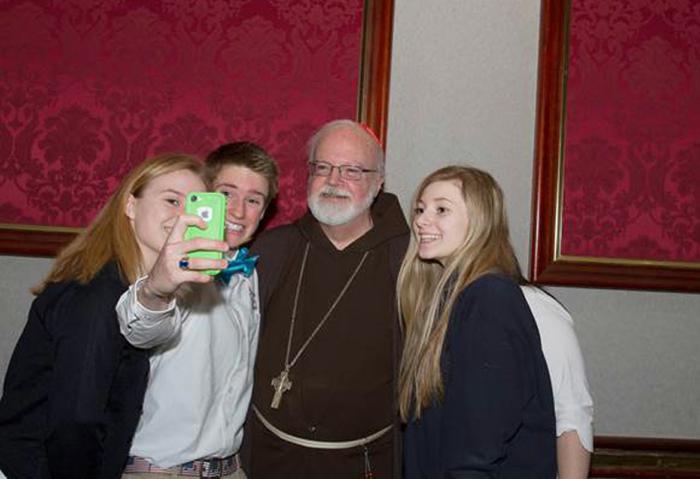 'Then, in the afternoon, I went to give a luncheon address to the South Shore Chamber of Commerce at The Lantana in Randolph... In attendance there were a number of students from Sacred Heart School in Kingston. They took a group photo... and, of course, some selfies...' Pilot photo/CardinalSeansBlog.org

This week we learned the date of the beatification of Archbishop Oscar Romero... I hope to hold a Mass of Thanksgiving here in the archdiocese of Boston for the Salvadoran community and others who have a devotion to this great man who certainly identified very much with the suffering and the persecuted. His preaching of the Church's social gospel put him in harm's way and eventually led to his death. He was murdered while saying Mass at the Catholic hospital in San Salvador. (I have celebrated Mass at that same altar.) I attended his funeral, which was on Palm Sunday. It was very memorable because thousands and thousands of people were gathered outside the Metropolitan Cathedral of San Salvador and, during the funeral Mass, the army opened fire on the crowd. The thousands of people just fled. I still recall that the square was completely vacant except for the palm branches covering the ground and the shoes and sandals that had fallen off the people as they trampled each other to escape. So, even in his death they were still persecuting him, and his beatification is certainly a vindication... I was privileged to be with Monsignor Romero on a number of occasions. I worked for 20 years of the Salvadoran community in Washington so I know what a great grace this is going to be for the Salvadoran people. We look forward to celebrating his beatification here in Boston.

Wednesday (3/18), I celebrated the funeral of one of the oldest priests in the archdiocese, Monsignor William Glynn. He had been blessed with great health, and was very active until quite recently. He was just a beloved figure in the archdiocese as a priest and a pastor. Bishop Uglietto delivered the homily at the funeral, which stressed how mercy was one of Monsignor Glynn's favorite words, but it was also a theme of his priesthood. Bishop Uglietto had been stationed with him at St. Gregory's in Dorchester as a young priest and said that the advice Monsignor Glynn always gave to priests was, "Remember three things: be kind, be kind, be kind." Monsignor Glynn was one of the first priests I met in the archdiocese, because when I was bishop in the West Indies I would come to Boston to do confirmations and his church, Holy Family in Duxbury, was one of the first places I went. Actually, I think I may have celebrated the first confirmation that was held at that church, because it had just been built. Monsignor Glynn had served as the director of the Society for the Propagation of the Faith for 10 years and had been very supportive of the missions, and was very supportive of me as a missionary bishop.

Then, in the afternoon, I went to give a luncheon address to the South Shore Chamber of Commerce at The Lantana in Randolph. This was the second time that I have addressed them. They have over 1000 members and the luncheon was very well attended. I began my address by citing the wonderful op-ed on Catholic schools by William McGurn that appeared in the Wall Street Journal on March 16. I then went on to speak about some contemporary issues in the archdiocese, in the universal Church, and the work of the reform of the Curia. Afterwards there was a period of questions and answers. It was a very nice event and I was glad to have been able to do it. In attendance there were a number of students from Sacred Heart School in Kingston. They took a group photo... and, of course, some selfies...