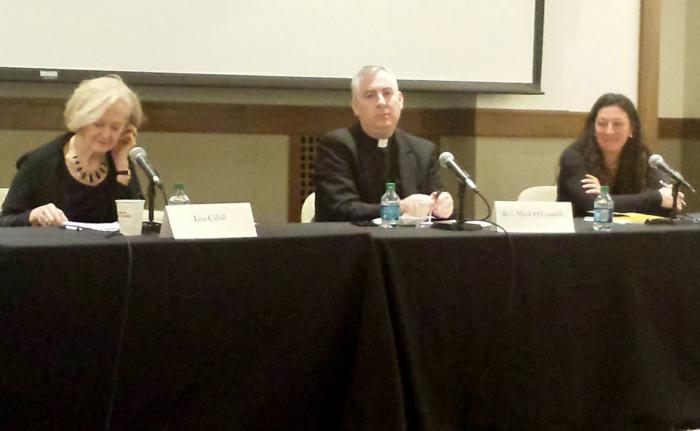 BOSTON -- In 1965, when the Second Vatican Council closed and the Catholic Church entered the post-conciliar era, the permanence of marriage was still largely a cultural given, with low divorce rates and virtually no annulments granted by ecclesial tribunals.

Fifty years later, not only is divorce more common, but every year tens of thousands of Catholics in the United States apply for, and obtain, annulments to remarry in the Church. The trend in divorce and remarriage cuts across religious differences and presents challenges to Jewish communities and evangelical Protestant denominations.

The shifting marriage landscape in Catholic, Jewish and Protestant circles was the main topic of discussion during the March 22-23 Corcoran Chair Conference at Boston College. Hosted by the Center for Christian-Jewish Learning, the conference consisted of three panel discussions with perspectives from scholars, theologians, clergy and sociologists.

Cahill, a past president of the Catholic Theological Society of America, spoke on the Catholic Church's teaching that sacramental marriage is an indissoluble union between one man and one woman.

Cahill said the Catholic tradition on marriage and divorce is more varied than many people think.

"In the Catholic tradition we tend to have a less literalistic approach to Scripture. The current teaching on marriage and divorce cannot really be derived in a straightforward way from the texts," said Cahill, who added that the Christian community from the beginning wrestled with how to implement Christ's prohibition on divorce as recorded in the synoptic Gospels.

Cahill noted that St. Paul, in his first letter to the Corinthians, made his own exemption for Christians to be able to divorce an unbelieving spouse who was not willing to live with a Christian.

"Paul sets up a model of historical reinterpretation where we acknowledge Jesus said one thing, but in communities in different circumstances, something different can be commanded," said Cahill, who described a "constant process" of re-appropriating and reinterpreting Christ's teachings.

Over the centuries, the Church's regulation of marriage also developed as the institution moved from the realm of Roman law to under ecclesiastical auspices. The principle also developed that marriage requires the mutual consent of both spouses, and developments in canon law represented that shift.

The indissolubility of marriage, Cahill said, became an official part of Church teaching after the Council of Trent in the 16th century. By that point, the Church understood the matrimonial covenant by its nature was perpetual, ordered to the good of both spouses and the procreation and education of children.

"There's an ontological bond that cannot be dissolved by any human power," said Cahill, who also commented on the importance of strong familial and social support systems to strengthen marriage and families.

"The issue for Catholics, maybe the most important thing, is not how you can further validate divorce but rather support families," Cahill said.

Father O'Connell also spoke on the marital bond, albeit it from a different perspective.

"Catholics believe marriage is an act of God, and once God creates something, you cannot erase it," said Father O'Connell, who addressed the issue of Catholics who divorce and remarry outside the Church not being allowed to receive Holy Communion.

The issue, Father O'Connell said, is not the divorce or the civil remarriage, but rather the state of adultery a person lives in by marrying someone civilly without a decree of nullity. To be readmitted to the Eucharist would require confessing to the adultery with the intent to no longer commit that sin.

"It's the sin that cannot be forgiven in confession that leads one away from Holy Communion," said Father O'Connell, who noted that St. Pope John Paul II, in his 1981 apostolic exhortation "Familiaris Consortio," created new openings for people living in irregular marriages to again receive the Eucharist.

In the United States at least, Catholics have taken advantage of a functional tribunal system in applying for annulments. Since 1965, Catholics in the U.S. -- far more than any other country without the same tribunal infrastructure -- have been able to obtain annulments at increasing rates, which Wilde attributed to cultural and competition-related factors in the religiously-diverse United States.

"The U.S. is by far the most extreme outlier in the world," Wilde said, adding that statistics show tribunals in 2010 granted 28,523 annulments, about a 97 percent approval rate.

But after increasing exponentially for decades, annulments in the West have started to level off in recent years as more people in general have become less religiously observant and do not consider remarriage outside the Church to be sinful.

The issue is particularly important for Catholic life, as divorce marks the point where about 20 percent of Catholics leave the Church permanently, Wilde said.

Pope Francis, in calling for a synod on the family, is looking to reexamine issues related to divorced and remarried Catholics receiving the Eucharist, said Father O'Connell, who added that he hopes the synod will result in a streamlined annulment system with a reformed appeals process.

"A lot of people don't even bother," Father O'Connell said. "I would like them to bother."