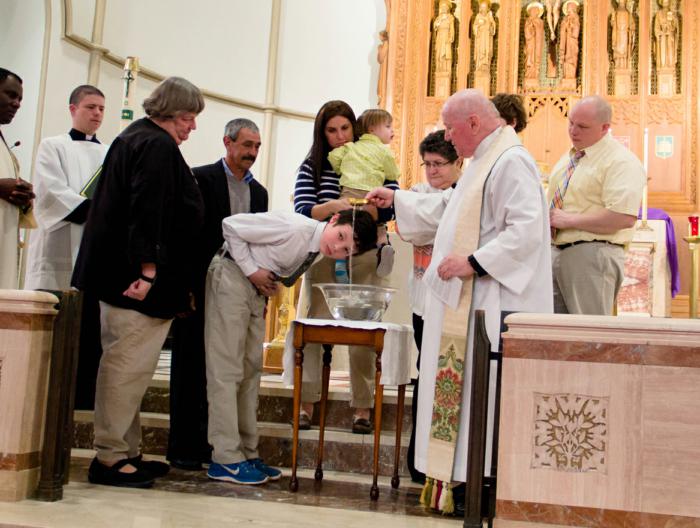 Father Richard W. Fitzgerald, the pastor of St. Columbkille Parish, baptized 20 children and announced the Profession of Faith of one more, March 13, at a prayer service for St. Columbkille Partnership School, faculty, staff, students and their families.

Speaking with The Pilot before the event, both the head of school and the pastor connected the baptism with efforts of the new evangelization. For the parish, that meant outreach to encourage a renewed participation in the life of the Church. For the school, that meant a redoubled effort to promote Catholic identity internally.

The two efforts in the context of the new evangelization intersected during enrollment, when the parish contacted the school to find out if any students wanted or needed the sacrament of baptism.

Head of School William Gartside said St. Columbkille Partnership School makes evangelization a priority and parents hold a primary role in that collaboration; but sometimes as a result of learning about their faith every day at school, children from St. Columbkille evangelize their parents in a way.

"These parents have told me, because I have interviewed them, that their children come home every day and talk about something with regards to their religion," he said.

He said organizing the baptism came as a simple matter of outreach, but holds a greater significance with regard to the Catholic identity of the school reflected by students at home.

"It's almost a reversal, with the children highlighting the importance of it and then the parents get reflective of the religion that is within their own roots that they had forgotten, and now they reenergize and come back. So, the reaching out was easy, but the process that went into it in terms of the educational piece and the spiritual dimension that happens every day in Catholic schools sometimes is not," he said.

The school recently added a position to promote Catholic identity in the classrooms and corridors. This year, Gartside appointed Rachel Rumely, previously a teacher at the school, Director of Mission and Catholic Identity.

Charged with forwarding the mission of the school "to offer a rigorous and comprehensive education rooted in Gospel teaching and committed to Catholic educational and religious traditions" according to the school mission statement, Rumely managed communications with the family and the community that led to the baptisms at the parish.

"This actually stemmed from one family saying, I want to have my child baptized. In between talking with Father Fitzgerald and talking with our Head of School Bill Gartside, we decided that if there's one there's probably more, and we should really ask," Rumely said.

She said the school began sending emails asking parents if their children needed the sacrament of baptism.

In his homily during the service, Father Fitzgerald spoke about a natural openness children show toward God.

Father Fitzgerald pointed to the words of Pope St. John Paul II as an inspiration for the effort.

"He said throw out the net and see what fish you catch. So, at St. Columbkille's we threw out the net," Father Fitzgerald said at the end of the service.

Corey E. Merchant, mother of three boys baptized that day, said her family was first in line to have her children baptized.

"We're kind of proud, because we kind of started the whole thing. It's very exciting, and we're very excited for the school as well," she said.