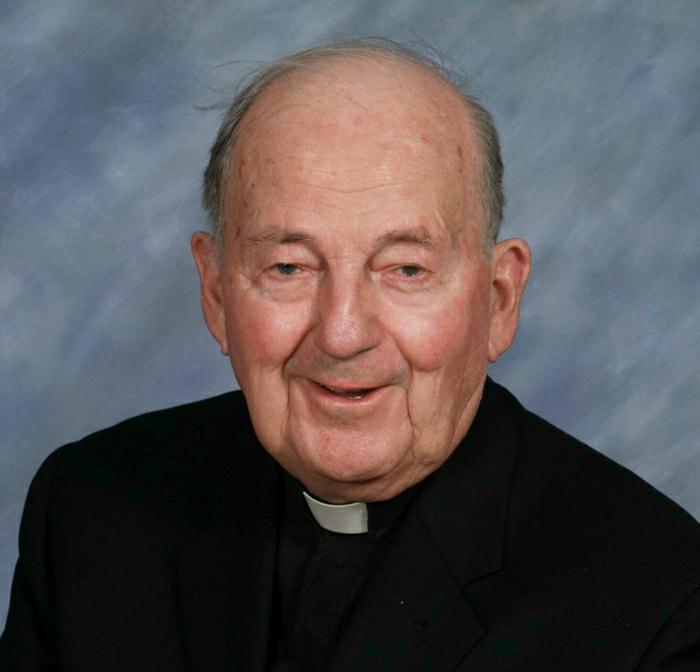 One of the archdiocese's best advertisements for vocations to the diocesan priesthood, Msgr. William F. Glynn died on March 13 at Bay Path Nursing facility in Duxbury; he was 92 years old.

Born in Cambridge, he was raised in the overwhelmingly Catholic section of the Hub, Dorchester. He was one of the three sons and one daughter of the late Michael and Nellie (Hurley) Glynn. A proud son of St. Gregory Parish in Dorchester's Lower Mills section, he attended the Woodrow Wilson School, the Boston Latin School and Boston College before entering St. John's Seminary.

A member of the class of 1947, he was ordained at Holy Cross Cathedral on May 1, 1947 by Archbishop Richard Cushing. His first assignment as a newly minted priest took him up the coast from the Hub to Beverly where he was an assistant at St. Mary Star of the Sea Parish where he was an assistant for the next four years. The pastor of the parish, Msgr. John Degan was already well into his third decade as pastor and would remain so for a record (in that parish) 42 years. His second assignment was a brief one at almost the opposite end of the archdiocese, St. Mary, Wrentham.

In January 1952 he was assigned at assistant Director of the Archdiocesan Office of the Propagation of the Faith. This also included the other pontifical mission societies: the Holy Childhood Association; and the Society of St. Peter the Apostle. Among his duties was visiting archdiocesan parishes preaching "the missions" and raising awareness and support for missions and missionaries. Boston's office had outpaced almost all other US diocesan offices in its goals when the office was spearheaded by then Father Richard J. Cushing.

Aware of the sage counsel "the response to the appeal will be in exact reverse proportion to the length of the talk," or, the shorter the better -- both in response and in support. Many priests recall that "Bill followed that advice and proved the old maxim correct." This would be his ministry over the next two decades. In 1960 he was named the director of the office and later that year, Pope St. John XXIII named him a domestic prelate with the title of Rev. Msgr.; at 38 he was one of the youngest priests of the archdiocese so honored.

He returned to his priestly preference in 1972 when he was named pastor of St. Catherine of Genoa Parish on Somerville's "Summer Hill." The church is one of the architectural and artistic gems of the archdiocese and the rectory, according to the priests who have even assigned there, one of the finest. Not surprisingly, since he was known as a priests' priest, the spacious rectory was never empty of three or four assigned parochial vicars and one or two residents, one usually being the chaplain at Somerville Hospital.

When his home parish was in need of a pastor in 1978 he was named to St. Gregory; and again the rectory was filled; among his parochial vicars there was Father Peter J. Uglietto, now one of Boston's auxiliary bishops and the homilist at Msgr. Glynn's funeral Mass.

Just over three years later, he was assigned as pastor at Holy Family Parish in Duxbury. The town had experienced dramatic growth over the previous decades; on arrival he met many folks he had known growing up as much of the population came from Dorchester or were scions of Dorchester families. The influx of so many second and third generation sons and daughters of Erin earned Duxbury and neighboring coastal towns the moniker "Irish Riviera."

It became obvious that the small church could no longer serve the needs of the parish. So marshaling his fund raising experience honed at Propagation, he set about the task of building a new, spacious church with a parish function facility below; later this would be named the Msgr. William F. Glynn Hall.

This would be the longest assignment of his priestly life, serving just shy of 26 years at the time of his retirement on June 30, 2007.

An avid and accomplished golfer, he organized tournaments both among parishioners and among priests. In retirement he lived in Duxbury and assisted in parishes, including Holy Family.

Cardinal Seán P. O'Malley was to be the celebrant of Msgr. Glynn's Funeral Mass at Holy Family Church, Duxbury on March 18. Among those indicating their attendance at the Mass were auxiliary Bishops John Dooher and Robert Hennessey; Fathers Bryan Parrish and Robert Deehan, both successors of Msgr. Glynn as pastor of the Duxbury parish; Fathers Peter Quinn and Dennis Dever, two long time golf partners; as well as other former parochial vicars and priest friends.

Msgr. Glynn was predeceased in death by his brother James and his sister Mary, as well as by his brother John who was a priest of the archdiocese until he was named an auxiliary bishop of the Archdiocese of the Military Services in 1991 and died in 2004.

Following the Funeral Mass, Msgr. Glynn was buried in the family plot at Calvary Cemetery, Mattapan with his parents and his siblings.