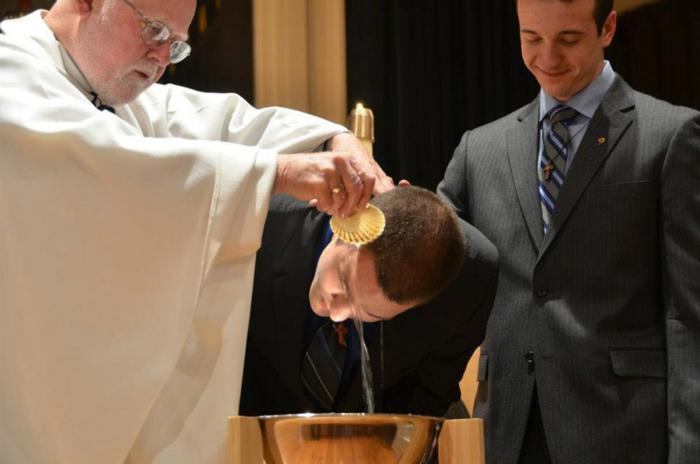 Zachary Dorfman witnessed the power of God for the first time on a retreat run by his Catholic high school. Dorfman, who was raised in a Jewish household but did not practice his faith, knew right away that he wanted to become Catholic.

"It opened my eyes to the fact that when a group of people get together and experience God's love, amazing things can happen," he said of the experience.

He soon graduated from Notre Dame High School in Lawrenceville, N.J., and when he arrived at Northeastern University in Boston the following year, he found the campus Catholic Center. He signed up for a retreat and then enrolled in the Rite of Christian Initiation of Adults (RCIA). One year later, he received the sacraments of baptism, first Communion and confirmation, in 2013.

During the year of preparation, Dorfman said he took advantage of the many opportunities to learn about the faith on his college campus. He attended weekly meetings, joined men's group and worshiped at Mass on Sundays.

Dorfman said he recognized Jesus in the Eucharist and had a strong desire to receive him but understood why he needed to abstain. He said it was "something to look forward to" while he continued learning about Church teaching.

He found several areas challenging, including the teaching that marriage is the union of one man and one woman. Dorfman had a roommate who was gay and believed there was "no way" he would ever change his thinking on the issue. But he went to a talk about same-sex marriage, led by campus minister Brother Sam Gunn, BH, with an open mind. By the end, he understood the Church's position.

He said he learned that the "bottom line" was that Jesus died for our sins and that all of Jesus' teachings stem from his love for us. "All of the teachings tied back to God's love. He wants the best for us," he said.

During the RCIA meetings, Dorfman had the opportunity to ask a lot of questions. "It really prepared me to receive the Eucharist," he said.

When he finally had the opportunity to receive Communion and baptism, no lightning strike or earth shaking accompanied the experience. He felt "anew" after the baptism. His peers at the Catholic Center thought it was "really cool" that he was baptized at 19 and that all his sins were wiped away, he said.

Dorfman recommends that others who are interested in becoming Catholic sign up for RCIA. "The worst thing that could happen is that you become closer to God. There's no drawback. You learn about someone's love for you," he said.

Since receiving the sacraments in 2013, Dorfman has led a retreat at Northeastern's Catholic Center and currently helps lead the center's men's ministry. He said that he is no longer in "learning mode" but is applying his faith to everyday life. Most importantly, he seeks to share God with other people.

"You never know what God's going to say through you to others," he said.