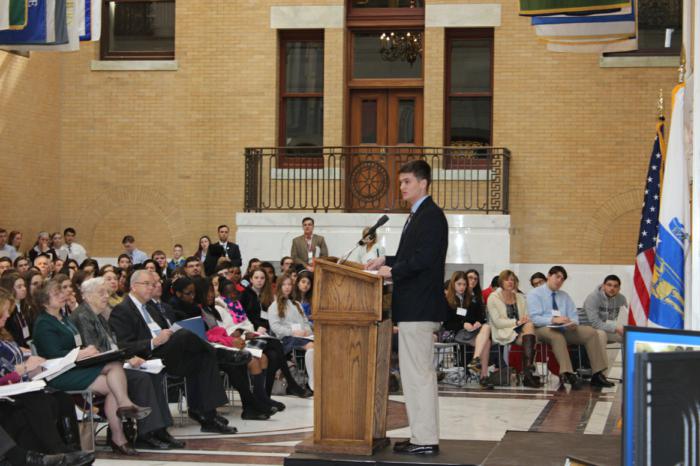 BOSTON -- Nearly 400 Catholic school supporters from all four Massachusetts dioceses traveled to the Statehouse to lobby for greater access to state support. The Advocacy Day, organized by Parents Alliance for Catholic Education (PACE) and held on March 11, afforded Catholic school students a civics lesson as well as the opportunity to advocate for themselves.

Fred Kalisz, executive director of PACE, said that the state budget for early education and after-school programs has been slashed from $5.5 million in 2009 to $1.6 million today. The funds for school nursing have not been cut, but the moneys have been "reprioritized." Originally, 85 Catholic schools received funding; that number has dropped to 39.

PACE also believes that as a matter of "equity," Catholic students should be allowed to compete for the John and Abigail Adams Scholarship, which provides full tuition for four years at the University of Massachusetts, the seven state colleges and 15 community colleges. Many supporters point out that Catholic school parents are taxpayers and that by educating over 60,000 students in Massachusetts, Catholic schools save the state some $568 million annually.

George Milot, principal at the Lower Mills Campus of Pope John Paul II Catholic Academy in Dorchester, said, "There are a lot of people who feel that the kids should get no services because the parents choose to send them to Catholic schools, and it's their choice, but these are still children of the commonwealth who deserve services because their parents pay taxes."

Milot is also a PACE board member and previously served as the Diocese of Fall River's Superintendent of Schools for a decade.

This years' Advocacy Day began with supporters gathering in the Great Hall. During the program, St. Bernadette School in Northborough was recognized for receiving the U.S. Department of Education's Blue Ribbon last year. Only 50 non-public schools are chosen for the honor annually. In order to qualify, schools must have five consecutive years where their students performed within the top 15 percent in standardized testing and show that they are exemplary, high-performing schools.

St. Bernadette's principal, Deborah O'Neil, said that the ribbon was an affirmation of the schools hard work and motivation to continue to improve.

"The reminder from the National Blue Ribbon experience is that we need to continue to strive for excellence and to ensure that our Catholic identity is always a consideration and the point from which we plan," she said.

Grace Rade, a seventh-grader at the school, said, "It is wonderful that we can go to a school where we can celebrate our religion freely."

Andrea Tavaska, the school's assistant director of mission and Catholic identity, said the award is a reflection on the exemplary education provided by all Catholic schools.

"It shines a light on all Catholic schools in all four dioceses," she said.

The rest of the PACE program included addresses by a Catholic school student, a PACE representative and three legislators.

One of those legislators, Rep. Alan Silvia from the 7th Bristol District, said he was honored to support Catholic education and told the students, "The Catholic-Christian values of service, justice and excellence is an important part of your life now and will be most important in the future."

Teachers and students said PACE's Advocacy Day imparts important lessons, while giving students the opportunity to witness their state government in action and to speak directly with their elected representatives. The visit leaves a lasting impression on many of the students for years to come.

"I heard some of the students saying that they would love to work there some day," Gagnon said.

Many of the students said that the visit showed them that they have a voice and that their opinions are valuable.

Molly Hoefel, an eighth-grade student at St. James-St. John School in New Bedford, said after she learned that Catholic schools miss out on state resources, she wanted to help change that. Her elected representative was open to listening and treated the students like their opinions mattered.

"The biggest thing I got out of this experience was learning that people in the government care about what I have to think and that I have a say in what they do," she said.