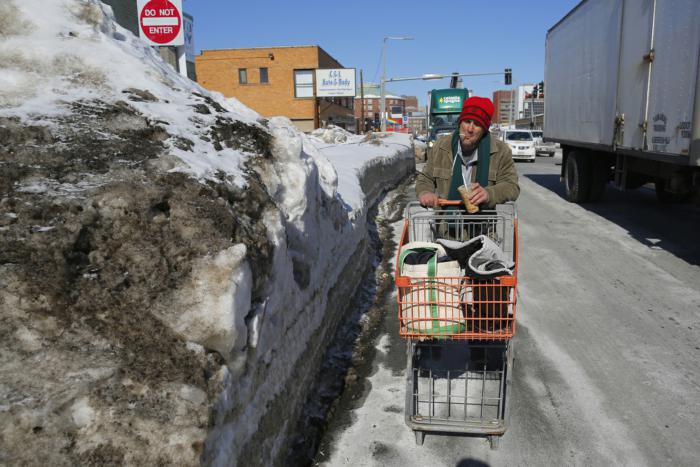 Mack Donohue, who has been homeless since 2008, pushes a shopping cart holding his belongings between snow banks and traffic in Boston, Feb. 27. Reuters photo via Newscom/Brian Snyder

BOSTON -- Even as the spring thaw begins to make its appearance in Boston, it's not hard to remember the single digit temperatures and record-level snowfall that made this winter tough for just about everybody in Greater Boston.

Perhaps those who suffered most in this time were the city's homeless, who rely on emergency shelters, donations and facilities to stay warm during the day.

"Homeless people are like the rest of us and they are subject to the elements as we all are. The only thing is they don't have a roof over their heads," said Joseph Burnieika, director of Catholic Charities Greater Boston.

The homeless, Burnieika said, are often at the whim of shelter vacancies. Catholic Charities assists almost 200 homeless people on a regular basis in its five shelters in the archdiocese.

"It has been a difficult winter for those who have not have been able to find housing," Burnieika said.

At St. Cecilia Parish in Boston's Back Bay, which has an active outreach ministry that assists the poor and homeless, parishioners have seen the toll that winter can take on homeless people.

"We have one parishioner who is a nurse at Boston Healthcare for the Homeless, and she's been treating a lot of people with frostbite on their feet. The tragic reality is that oftentimes she's sending them back out in the snow and cold and they're wearing nothing more than sneakers and lightweight shoes," said Mark Lippolt, the Homelessness and Hunger Ministry leader at St. Cecilia.

Lippolt said St. Cecilia parishioners have collected donations to purchase boots and other warm-weather gear. Lippolt and parishioners volunteer in a myriad of charitable and social justice activities, including volunteering at the Pine Street Inn, an emergency homeless shelter at 444 Harrison Ave.

Lippolt said the shelters where parishioners volunteer have seen increases in people seeking services since the Long Island Bridge shelter closed in October. Mayor Martin J. Walsh's administration has been working to replace the beds, programs and services that were lost when Long Island shuttered.

Still, Long Island Bridge's closing has put a significant strain on other homeless service providers, including St. Francis House, the largest day shelter in New England that is located in the heart of downtown Boston.

"The biggest strain has been on the people we serve, the homeless men and women themselves," said Karen LaFrazia, executive director of St. Francis House.

LaFrazia said St. Francis House has seen a 36 percent increase in the number of people who are being provided clothing, as well as an 11 percent increase in meals served, since Long Island Bridge's closing. Also, St. Francis House began opening its doors earlier this winter after the staff saw a spike in the number of people who were showing up at the door before 7 a.m.

"When the Bridge went down, it was traumatic for our guests," LaFrazia said. "They live a very unstable life and shelters are the only stability that exists in their lives. It's their source of nourishment, both physical and spiritual.

"The bridge's closure was very disruptive for everybody. A bad situation was exacerbated by the worst winter we've had in recent memory. I think those two things colliding together have really put a strain on homeless men and women and the organizations that help them, including St. Francis House," LaFrazia said.

A number of downtown churches set up day shelters to take in people displaced by Long Island's closing, said Lippolt, who added that he has also seen an increase in the number of people showing up at the Pine Street Inn and the Women's Lunch Place, a daytime center on Newbury Street for poor and homeless women and their children.

Homelessness appears to be an entrenched problem in Boston. The 2013-14 annual Census of Boston's homeless population found 7,255 homeless people in the city. That represented a 3.8 increase from the 6,647 homeless men, women and children who were counted the previous year.

According to a December 2014 report by the U.S. Conference of Mayors, Boston has more residents living in emergency shelters than any of the 25 major cities listed in the report.

St. Cecilia Parish has long recognized the need to assist the city's homeless, and parishioners volunteer year-round by serving dinner at the Pine Street Inn, collecting food donations for Catholic Charities' food pantry in Dorchester, and collecting toiletries and other items for guests at the Women's Lunch Place, among other activities.

"As a parish, we're very mindful of Matthew 25," Lippolt said. "We are a very affluent parish that believes to whom much is given, much is expected. I think it's only right that we're doing what we're doing. We have the resources to do it.

"These are our neighbors," Lippolt added. "They may have fallen on hard times and have different economic circumstances, but they are most definitely our neighbors."

Burnieika said donors and volunteers have been particularly generous to Catholic Charities, especially with donating food and clothing.

"We've seen an outpouring of compassion and concern from so many people," said LaFrazia, adding that parishes have organized food drives, offered their second collections and sent groups of volunteers to help out at St. Francis House.

"Until you walk in their shoes, it's hard to know what homelessness is like, how it robs you of your dignity," LaFrazia said. "You realize these are our brothers and sisters, and they're not so different from the rest of us."