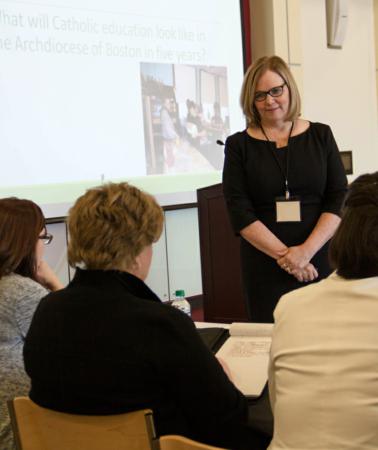 She said making Catholic identity a central priority in the archdiocese came as a result of consultation and conversation, particularly a conversation early in her time in Boston with vicar general Bishop Peter J. Uglietto.

The vicar general told her he wanted her to interview 97 people with experience in or related to Catholic schools -- she expanded the list to 143 -- and write a plan for Catholic education in the archdiocese in her first 90 days.

"Here's the question that I asked everybody: What will Catholic education look like in the Archdiocese of Boston in five years? What would you like it to look like?" Mears said.

The meeting at B.C. High School gave educators the opportunity to interact with the new superintendent of schools in a conversational setting.

When Mears put questions to the audience, she asked people to discuss and provide her with feedback on the spot.

"We are the lucky, fortunately, God-blessed people to create the future. What a gift? So, what do we want it to look like?" she asked.

Educators and leaders suggested increased accessibility and affordability, the goal of being fully enrolled and fully endowed, and the importance of shared resources and collaboration.

Educators and leaders also pointed out that Catholic schools play a role in the lives of students now, which parishes played in the lives of young people of former generations. Mears said she had looked at the issue of parish life in the interviews she conducted.

"Every single pastor, or priest, I talked to, they are worried that Catholic school parents don't take their children to Mass on Sunday. Every single pastor said that. So, that's obviously an issue. For some of our kids if they don't go to Sunday Mass, their school community is their parish community," Mears said.

She said the archdiocesan Catholic school leaders need to think about, pray about, and take action on establishing and affirming the Catholic identity component of Catholic education. She said elements of education like academic rigor do not fall aside as a result of pursuing Catholic identity.

"When you say Catholic education, or Catholic school, the first word out of your mouth is Catholic. We are not going to run away from that," Mears said.

"Being Catholic means you're academically rigorous. Those are not mutually exclusive. In fact, I think they go hand-in-hand," Mears said.

She also said enrollment drives everything, and that in competition for enrollment Catholic schools can stand up to any threat -- including the threat of charter schools that many say Catholic education cannot overcome.

"Just say 'can't' in front of me. It's like a red flag. Here's what I say: Bring it. We're good enough. We can compete with anybody. Bring it. Bring your best game. We're going to beat it," Mears said.

She said Catholic schools can set the education they provide apart from public charter schools and district schools. For example, she said a Catholic school in Philadelphia has announced a plan to focus on developing an entrepreneurial spirit, where students write business plans as part of their education. She said a school in San Francisco plans to bring back the idea of a technical Catholic high school. She said tech schools in Massachusetts have a waiting list.

In an environment in which every school is trying to create "21st century learners," if everyone goes about it in the same way they are "selling vanilla ice cream."

"The public schools ... are selling vanilla ice cream too, and their cones cost ten cents and ours cost 40," she said.

She cited four popular buzz words in education today: communication, critical thinking, creativity, and collaboration. Mears added a fifth for those in the room: catholicity.

"All we have to do is think about, how can we do this differently? The first difference is you're Catholic, and we're developing saints and scholars," she added.

Organizers encouraged follow up after the meeting, and Mears stressed that the Catholic Schools Office would provide not just feedback, but support for individual Catholic schools moving forward. Mears, in the past and at the meeting at B.C. High School, also pointed to collaboration between schools as a resource her office would help facilitate.

"There's some power in this group. There are a lot of smart people here who are really dedicated to supporting Catholic education. I'm feeling hopeful that we have a new leader here," said Pamela Desmarais, president of Sacred Heart School in Kingston.

Sacred Heart principal Michael Gill said he appreciated the opportunity to interact with his colleagues and hear from Mears as the new superintendent.

"I just really appreciated an opportunity to hear her ask how she can help us," he said.

Kathleen Colin, Principal of Notre Dame Academy in Hingham, said she also enjoyed the opportunity to network with other Catholic school leaders.

"Not only did Kathy's question about how could she help us, but the question back at her how can we support the Catholic Schools Office, just gave a strong indication that we are in partnership. That needs to be a continual emphasis," Colin said.