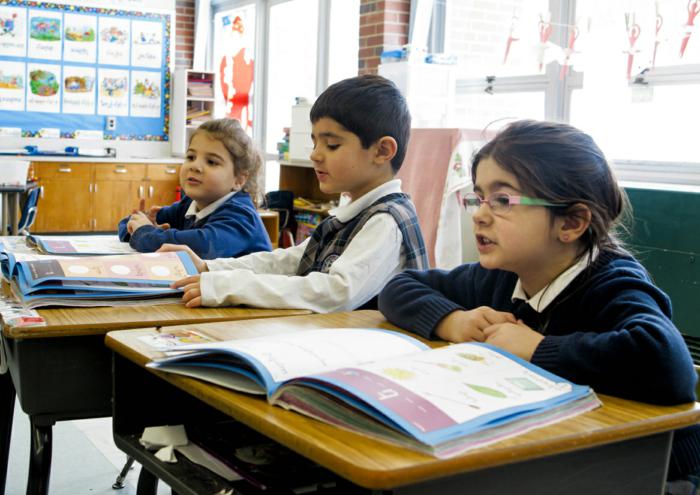 Students at the Armenian Sisters Academy in Lexington are getting a history lesson they won't soon forget.

This year marks the 100 year anniversary of the Armenian Genocide, in which it is estimated that 1.5 million Armenians were killed under the rule of the Ottoman Empire in what is now Turkey. The starting date of the genocide is traditionally marked on April 24, the date when, on 1915, Ottoman forces captured 250 Armenian intellectuals in Constantinople. However, rather than memorize facts and dates, students are being asked to interview family members to "let them find themselves and their own families within the Armenian story," explained Mayda Melkonian, vice-principal and Armenian Curriculum Director.

Students then will write an essay based on their families' individual story, she said.

"We want our students not only to learn the history of the Armenian people, but also their own families' stories, and to see how the two are part of the same," Melkonian added.

The academy is a little different than most elementary schools. In addition to the regular curriculum, this elementary school focuses on the Armenian culture, language and history. Classes are taught in both English and Armenian. Armenian feast days are celebrated alongside American holidays. During October, which is Armenian culture month, students are immersed in Armenian language, culture, dance and customs.

"We have our own alphabet, which we teach to the youngest children from the beginning," explained Sister Nelly Isin, the school's principal and a member of the Armenian Sisters of the Immaculate Conception who run the school. "We really insist and instill in the kids the love of their heritage."

"For us the culture is very important," added Melkonian, though she noted that children of all cultures and backgrounds are welcome at the school.

The Armenian Sisters Academy was originally established in 1979 in Watertown by Sister Alphonsa Bedrosia as a preschool to serve the Armenian community. In 1982, she opened the academy in Lexington to allow for the expansion into an elementary and middle school education.

"Beginning in 1983, we added one grade every year," recalled Melkonian, who has been teaching at the school since its inception.

Currently, the school has 61 students from Pre-K through grade 7, although plans are underway to expand next year to include the eighth grade, which Sister Nelly admitted is only a fraction of what the school could accommodate.

Sister Nelly only arrived at the school in September, but already has begun instituting plans to move the school forward including repurposing old classroom space and engaging alumni volunteers.

"Many of these former students, who are now parents themselves, volunteer their time and their skills to help our school," Sister Nelly said, point to the example of parent Victoria Zacarian Tarabelsi. Tarabelsi is a graduate of the school who now teaches English as a volunteer in her daughter Talia's kindergarten classroom.

"Our alumni are also working on renovating the library," 'Sister Nelly said, adding that alumni have also donated flat-screen televisions for each classroom that will be linked to the computer system.

"We are rebuilding and reestablishing ourselves," she said. "The important thing is the students, and the parents are happy."