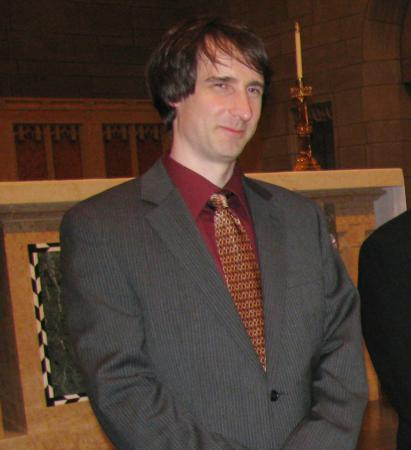 Tom Heneberry, baptized but not raised Catholic, came into full communion with the Church on April 11, 2009 at St. Theresa of Avila Parish in West Roxbury. Pilot photo/courtesy Tom Heneberry

When Tom Heneberry felt called to seek God, he knew that he needed a community of believers to help him along his faith journey. Heneberry was baptized in the Catholic Church as an infant, but his family stopped going to Mass a few years later.

"I didn't know anyone who was a practicing Catholic," he said. "I needed support."

He found that support at St. Theresa of Avila Parish in West Roxbury where he enrolled in the Rite of Christian Initiation of Adults (RCIA) program and received the sacraments of first Communion and confirmation at the Easter Vigil in 2009.

Heneberry said that the "personal connection" was the "most important part" of RCIA for him.

But Heneberry began his journey back to the Church on his own. He had grown up in Connecticut, attended Skidmore College in upstate New York and moved to Boston after graduation to room with friends. He got a job at a wine distributor and married his wife in 1997.

Though there were good things in his life, he felt depressed and knew that something was missing. He remembers thinking, "I can't keep living like this. Life has to mean something. I need God in my life."

"I felt like, 'This is it.' There was nothing in there that didn't make sense to me," he said.

He started praying regularly and soon contacted his local parish, St. Theresa's, to enroll in RCIA. He said the program confirmed what he already understood about the faith and that he learned a lot from its team members.

One part of the process for Heneberry was that he and his wife, who were not married in the Catholic Church originally, needed to have their marriage convalidated -- or recognized by the Church. He said his wife, who is not Catholic, has been supportive of his faith journey. The pair have two children, ages four and five.

Heneberry said that from the beginning, the RCIA process started to build a foundation of faith that continued to grow stronger. He called the Easter Vigil "amazing."

"During the Mass, I felt like it was heaven on earth," he said, adding that he remembers thinking, "My life is totally changed."

In the beginning he felt "ecstatic," and even though his feelings of excitement are not as strong years later, the foundation is always there.

He said RCIA is a great process for discernment and encourages others who are interested in the Catholic Church to sign up.