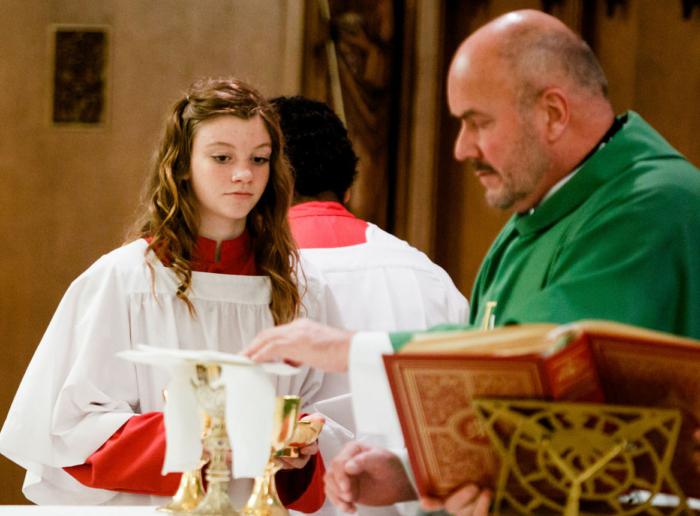 These days in society, boys and girls are accustomed to participating in many activities together, such as attending school, playing sports and taking part in extracurricular activities.

They also serve together at the altar during Mass every Sunday.

The practice of permitting girls to be altar servers has been a recent topic of discussion in some Church circles in the wake of Cardinal Raymond L. Burke's online interview in January with a men's ministry group, in which he speculated that female altar servers may discourage boys from taking part in what was traditionally seen as a venue to foster priestly vocations. A San Francisco pastor also generated headlines in January when he decided to stop allowing girls to serve as altar servers at his new parish.

In 1994, the Congregation for Divine Worship and the Discipline of the Sacraments announced an authentic interpretation of the 1983 Code of Cannon Law, stating that canon 230 2 permits lay men and women to be altar servers. The interpretation, confirmed by Pope St. John Paul II, allowed individual diocesan bishops and parish priests to decide whether to allow altar servers of both genders.

"We appreciate all altar servers, both the boys and the girls," said Father Dan Hennessey, the director of vocations for the Archdiocese of Boston.

While recommending that parishes retain, "as far as possible," the custom of having only boys serving at Mass, the Vatican instruction gave bishops the choice of permitting women and girls to serve at the altar. The letter recommends that bishops consider "among other things the sensibilities of the faithful, the reasons which would motivate such permission and the different liturgical settings and congregations which gather for the Holy Mass."

Most parishes in the archdiocese welcome girls to serve at the altar with boys. Father George C. Evans, pastor of St. Julia Church in Weston, said the boys and girls work well together, and added that he has about the same number of boy and girl altar servers.

"If we only allowed boys, and not girls, we would have nowhere near enough servers," Father Evans said. "I think you want to have a way of including girls in the life of the Church, and boys too."

"I think we have an equal number of boys and girls in our parish who serve at the altar. For all of them, it really is a unique opportunity at an early age to have a ministerial role in the celebration of the Eucharist," said Father Paul B. O'Brien, the pastor of St. Patrick Church in Lawrence.

Father George C. Hines, pastor of Blessed Sacrament Church in Walpole, St. Mary Church in East Walpole and Our Lady of Sorrows in Sharon, said well-trained altar boys and girls both "bring something to the table."

"If they are well-trained, it doesn't really matter to me whether it's a boy or girl serving at the altar," said Father Hines, who added that he has never encountered a problem of boys and girls serving together.

On the question whether altar service can facilitate priestly vocations, Father Hines added it can still serve that purpose, even with both genders serving Mass.

"I think we can work with the boys who are there" Father Hines said. "If a priest is encouraging young men to consider vocations to the priesthood, then certainly altar service traditionally is a place where that can be nurtured."

While allowing for both boys and girls to serve at Mass, the 1994 letter from the Congregation for Divine Worship and the Discipline of the Sacraments itself says that "it will always be very appropriate to follow the noble tradition of having boys serve at the altar." The letter also mentions all-boy altar service leading "to a reassuring development of priestly vocations."

But as the wider secular culture has changed, fewer boys and girls today are enrolled in single-sex schools or involved in extracurricular activities that exclude the opposite gender. That reality leads to altar boys and girls not really having an adjustment when called to work together in church.

"They're already accustomed to doing things together," said Father O'Brien, who added that he hopes serving at Mass deepens the prayer lives of both the boys and girls.

"I would hope it helps the kids get closer to God, to discover their vocations. In a way, it's still a channel to vocations," he said.

Father Evans added that boys who serve with girls on the altar and discern priestly vocations may also benefit in that if ordained, they would already have some experience working with females in ministry.

"If anything, it reminds them that if they become priests, they would be working with men and women," Father Evans said.

"Well-trained altar servers, male or female, they do the job right," Father Hines added. "I don't know if there is anything specific to gender where one brings something different to the table one way or the other. But if you bring in kids who want to do it, who are willing to listen and be trained, and are willing to do that, then I think you're going to have very good altar servers."