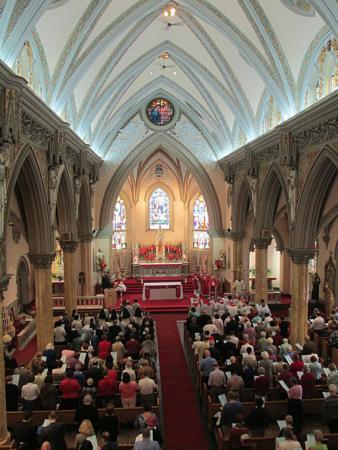 Cardinal Seán P. O'Malley officiates at a Mass of Celebration for Our Lady of Victories Shrine on May 19, 2013. The parish is located at 27 Isabella Street, near Park Plaza, Boston. The Marists opened the shrine in 1886 and it remains in service to the Archdiocese of Boston today. Courtesy photo

Marist founder, Father Jean-Claude Colin, S.M., envisaged a world where people from all walks of life would "live Mary's life" in their time and make present in the world the Holy Spirit as modeled in Mary's life of grace.

Father Colin, who lived in France during the French Revolution, saw this as a means of bringing about a Church and human society rooted in the power of God's love and mercy. The way Mary lived her life and went about her work inspires Marists to do the same. At the heart of Mary's work is an openness to all people, excluding no one and enabling men and women to grow and develop according to their truest call.

The first Marists to set foot on American soil did so in New Orleans during the Civil War, in February, 1863. The area was considered mission territory in those days, and the French Marists had responded to the request of the bishop to evangelize the many French speakers who had settled in the area. Marist service to the Louisiana River Road region would continue through 1996, and had expanded quickly from the 1860s, with Marist foundations blossoming in all corners of the country, including New England.

Having heard of the French-speaking Marists' work in Louisiana, Boston's Archbishop John Williams turned to the Society of Mary for help in ministering to the influx of French-speaking Canadians who had arrived in Massachusetts from Quebec. In 1882, the Marists took St. Anne Parish in Lawrence and within a short period established missions in Merrimack Valley that would become four parishes.

From their Boston provincial center, the Marists reached into other New England states and extended to Michigan and New York. Ministries based in the former Boston Province (the American provinces unified in 2009) included work in parishes, hospitals, schools, prisons, orphanages and at the Boston harbor waterfront. In hospital ministries alone, a total of 90 Marist priests have answered the call to serve as Chaplains at New England's largest hospital, Massachusetts General Hospital in Boston.

Our Lady of Victories Shrine is the oldest Marist establishment in New England. It began as a chapel near the State House on Beacon Hill, run by a diocesan priest, who ran the parish there for three years.

The Marist Boston Province began officially in 1885 and, on September 3 of that year, the Province purchased land on Isabella Street in Boston and constructed the new site for the Church, taking over the Church from the diocesan priest after he became a monsignor for the Archdiocese of Boston.

The parish opened its doors in 1886 to serve the people of its immediate area, and those living in Brookline, Dorchester and Roxbury, where a considerable number of French-speaking families had settled. Unlike the French-speaking immigrants in Merrimack Valley and Maine to whom the Marists were also ministering, these families were not just Canadian, but also French, Belgian, and Swiss -- all sharing the common denominators of their Catholic faith and French language.

Today, from its little corner of Back Bay/Bay Village, and because of its proximity to numerous Boston hotels and a bustling business area, Our Lady of Victories (OLV) has become a center of worship for a small group of neighbors and many workday commuters, tourists and business travelers who bring a variety of native tongues and traditions into the church, yet share their devotion to God and an appreciation for the parish's splendid history, architecture, stained-glass and glorious music, each of which transcends all languages. Many Catholics who run the Boston Marathon attend OLV's special Marathon Masses.

Marist pastoral ministries in the archdiocese are centered primarily in Boston. At Our Lady of Victories Shrine, in addition to parish activities, there is an English as a Second Language (ESL) program.

In Kenmore Square, the Marist-run National Lourdes Bureau of America, founded in 1950 by the Marists at the request of Archbishop Richard Cardinal Cushing, and through arrangement with the Bishop of Lourdes, France, mails out an average of 22,000 small bottles of Lourdes water every month. The ministry also publishes a bi-monthly newsletter to 47,000 readers, sponsors annual pilgrimages to Lourdes, and conducts daily Mass and confessions for students, residents, hotel workers and guests, as well as shoppers and visitors to the Kenmore Square area.

Father Paul Frechette, S.M. is Director of Postulancy and Director for Initial and Continuing Formation. He is the provincial-elect for the Marist Province of the United States.