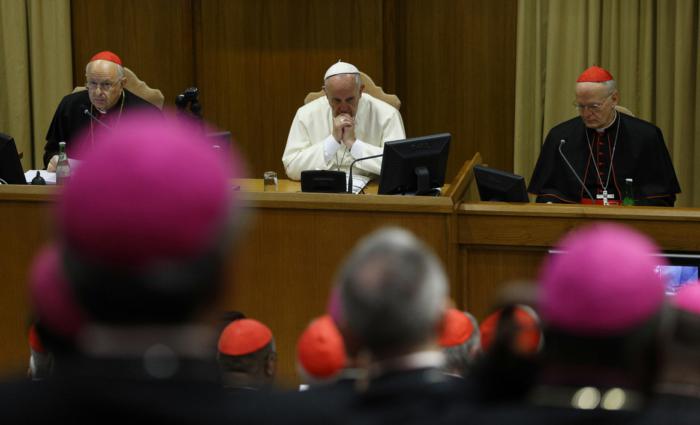 Pope Francis attends the final day of the extraordinary Synod of Bishops on the family at the Vatican last year. Consultations are now beginning for the ordinary synod to be held in October. CNS photo/Paul Haring

Questions for discussion based on the 'lineamenta'

BRAINTREE -- Much as it did for last year's Extraordinary Synod, the Vatican is reaching out to the dioceses of the world for input to set the agenda for the 2015 Synod of Bishops on the family to be held in October.

Here in the Archdiocese of Boston, discussions and consultations will be conducted at the parish level in February to provide input for the upcoming synod.

The archdiocese created a committee to facilitate the discussions and consultations shortly after it received the "lineamenta," or outline, of the upcoming synod in December. The "lineamenta" consists of 46 questions related to 61 "points of reflection" and is meant to broadly elicit observations and reactions before discussions at the synod.

The "lineamenta" specifies that episcopal conferences -- like the United States Conference of Catholic Bishops -- should involve "all components of the particular churches and academic institutions, organizations, lay movements and other ecclesial associations" in gathering information to create a working document for the upcoming synod.

At an archdiocesan cabinet meeting in December, a committee was formed to help facilitate archdiocese's response to the questionnaire. The committee members are Father Bryan Parrish, assistant vicar for administration; Father Robert Reed, president of The CatholicTV Network; Sister Marian Batho, Delegate for Religious and head of the Archdiocesan Pastoral Council; and Father Mark O'Connell, judicial vicar and a seminary professor on family studies.

"I feel confident that we are moving forward in a faithful and accessible manner," Father Parrish said.

The committee established that the first order of business had to be organizing the process and making the outline provided by the Vatican easier to work with in a parish or similar group setting.

The committee paired down the 46 questions into six broader questions, which summarize the issues proposed in the outline.

The website also provides six videos based on the six questions that Father O'Connell summarized.

Throughout the month of February, Father O'Connell will hold meetings in each of the five regions of the archdiocese to help parishes understand the process before the consultations begin.

After the discussions, parishes will be expected to hold consultations based on the outline provided by the Vatican or the summary provided by the archdiocese. Each parish should provide a summary of findings to their vicar forane by March 1.

Father Parrish said parishes, academic institutions and organizations -- including the Archdiocesan Pastoral Council -- will also provide summaries of the consultations.

"It's a way of consulting really broadly with the faithful, with leaders, parish leaders and the various parish communities, and ultimately kind of summarizing, so that that then gets over to Rome," Father Parrish said.

Once the vicars forane receive the summaries from parishes, they will consolidate and submit their results to Father Parrish by March 15. The final summaries are due to the Vatican by April 12.

Father Parrish said he feels confident that the input will drive discussion in the upcoming synod, as a questionnaire in 2013 helped inform common themes that arose at the last synod.

"I think that was really shown through the discussions at the extraordinary synod, that much of what the bishops discussed really were the issues that had come from the consultation process," he said.