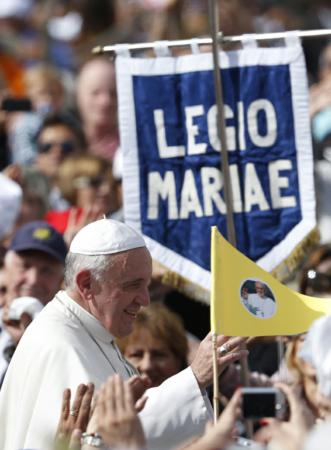 Pope Francis passes a Legion of Mary sign after celebrating Mass in St. Peter's Square at the Vatican in October 2013. Members of the Legion of Mary make a consecration to Our Lady and agree to do at least two hours of service each week. CNS photo/Paul Haring

FAIRHAVEN, Mass. -- During Pope Francis' Year of Consecrated Life, a local group invites Catholics to make their own consecration. While certainly not the same as the commitment to become a religious brother or sister, making a commitment to a lay association like the Legion of Mary brings many blessings, members say. Members make a consecration to Our Lady and agree to do at least two hours of service each week.

Dot Wiencis, secretary of the Boston Senatus, said that being a legionary requires sacrifice but is well worth it.

"You get so much more back than what you put in," she said. "I've learned so much."

She added that one of the most important things she has learned is that growing closer to Jesus and Mary is a life-long journey. The Legion has helped her to know both Christ and his mother better.

The Legion of Mary was founded in Ireland nearly a century ago. With 3 million members worldwide, it is the largest apostolic organization of lay people in the Catholic Church.

Each Legion group, called a praesidium, is based in a parish and meets weekly. Several parish groups in one area form a curia that meets monthly. At those meetings, there is always an Altar of the Legion. The table is laid out with a white tablecloth with the words "Legio Mariae." On that is a statue of Mary with both a flower vase and candlestick on each side. Placed on Mary's left side is the vexillium Legionis (standard of the Legion), a metal and onyx figure that shows the Holy Spirit in the form of a dove and the Miraculous Medal.

In addition to regular meetings, members of the praesidia come together for social and spiritual gatherings throughout the year, including a Christmas party, summer picnic, retreats and the Marian consecration in March.

"The consecration to Our Lady is very special to us," said Joyce Sylivia, president of the curia that meets in Fairhaven. "It's a very emotional and spiritual thing for us. It's committing to serving Mary for another whole year."

Before joining three years ago, Sylivia had been praying the rosary every night and was interested in the legion's focus on service.

"I'm retired, and so I was not doing anything in particular. This has gotten me involved," she said. "It's like a job. I do it five days a week. It's gotten me off the couch and doing something worthwhile."

Another aspect to the legion is fellowship. "We have a lot of fun," Sylivia said.

Geneva Viveiros, president of the Fairhaven praesidium, said that part of the work of the legion members is to invite others to know God better while growing closer to him.

After she joined the legion in 1972, she would go out and meet people in their homes and ask them to pray the rosary. Now, she volunteers as a eucharistic minister at a nursing home and takes the Eucharist to residents who cannot leave their rooms.

Members also pray for others. She said, "We pray that everyone will go to heaven. We pray for peace in the world and for all the children of the world. We have a lot to pray for."

Serving and praying for others comes with positive personal effects. Viveiros said legion membership has made her more spiritual.

"It makes you love God more and more. You get to know how good He is," she said. "Belonging to the Legion of Mary is a sanctification of yourself."

Robert Grant, a member of the Fairhaven praesidium, said that the legion is for any Catholic who wants to become holier. Membership assists Catholics in intentionally living life in the faith and brings a supernatural peace.

"When you put God first, everything else goes in the proper proportion," he said. "The world is always called to a deeper conversion."

"It's a deepening of union with the Church," he said.

(Editor's note: Information about the Legion of Mary in the Archdiocese of Boston is available by contacting nelegionmary@gmail.com or 617-347-5430.)