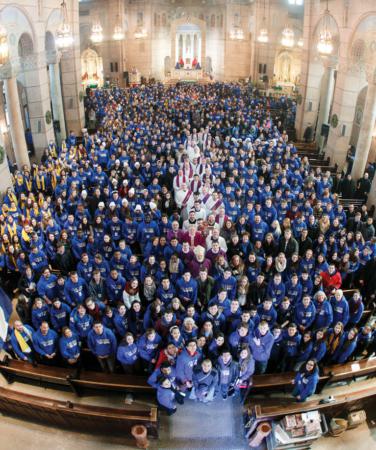 Boston pilgrims pose for a photo following the Mass at the Shrine of the Sacred Heart. Pilot photo/Gregory L. Tracy

WASHINGTON -- For all of those who travelled from Boston to Washington for the 2015 March for Life, the trip was a pilgrimage not a vacation, but for one Boston group the oft-repeated idea meant some additional sacrifices.

For a group of young adults who traveled on a new track offered by the Office for Lifelong Faith Formation and Parish Support's Faith Formation of Youth and Young Adult Ministry this year the commitment to sacrifice manifested in long hours of travel, few hours of sleep, and no beds.

The group travelled with the rest of the young adults on a bus from Braintree. Since most of those travelling with the young adult group the evening before the march hold full-time jobs, the bus left in the early evening, which brought the group in to their sleeping accommodations around 3:30 a.m. -- the basement of Sacred Heart Shrine in Washington.

The Pilot asked Marlene DeLeon, campus minister at Bridgewater State University, about their experience sleeping on a floor in a basement they would later find out had particular significance for Cardinal Seán P. O'Malley earlier in his life.

In his homily at the church the following day, Cardinal O'Malley recounted how he once slept in that basement alongside families who lost their homes to fires set days after the death of Martin Luther King Jr.

"All the time that people were marching and so concerned about desegregation, he lived in the midst of communities that were already desegregated and we slept possibly on the same floor that he would as a young priest," she said.

Cardinal O'Malley also noted the increasing support of the movement to defend the unborn, which increasingly comes from young people like Pedro Serrano, 21, a former member of the Air Force. He told The Pilot why he came to believe in the protection of human life in the womb.

"It happens from personal experience," he said.

He said when he was 19 a young woman asked him if she should terminate her pregnancy.

"I could not tell her that, and I could not do that, and there is where everything became clear what my point of view was and where I stood," he said.

Michelle Osowski, 21, who travelled with the Bridgewater State University Catholic Center, said her respect for life came over time as she explored her faith. She said a photo of a baby in the womb getting open-heart surgery particularly moved her, as tiny fingers grasped the hand of a doctor.

"If that wasn't a human, or living, he wouldn't have been able to do that," she said.

Osowski said that kind of display of humanity from the unborn demonstrates the reason young people to march -- after travelling long hours on a bus and sleeping on the floor.

"I get it's a right that you should be able to choose what you want, but this voiceless child doesn't get to make a choice," she said.