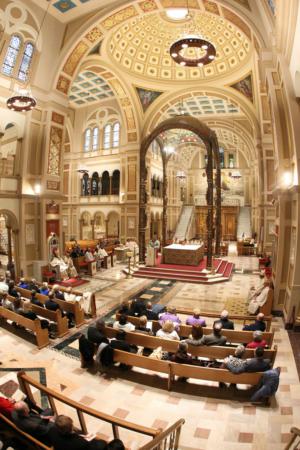 "I am president of the USCCB Office for Pro-Life Activities and, traditionally, the head of that office celebrates a Mass for the directors of pro-life offices and other pro-life leaders at the Franciscan Monastery of the Holy Land in America in Washington D.C. on the day before the March." Pilot photo/Gregory L. Tracy

Each year, Communion and Liberation sponsors a gathering in New York City, which they call the New York Encounter. This year's theme was "In Search of the Human Face" and the gathering was very much dedicated to the memory of my good friend, Msgr. Lorenzo Albacete.

On Saturday evening, I was asked to participate in a panel discussion "Identity and the Challenge of Disability" with Jean Vanier and Timothy Shriver.

Jean Vanier is the much revered founder of L'Arche movement, adult communities of special-needs people, particularly those with Down syndrome. He gave a wonderful talk through video. Timothy Shriver is chairman of the Special Olympics. He has a theology degree from Catholic University of America and is the father of five children. He is a man who is very much dedicated to advancing the cause of people with special-needs.

It was a beautiful dialogue, I thought.

I was also happy to be able to celebrate the Mass for them on Sunday.

Following the New York Encounter, I returned to Boston for a couple days of work in meetings before heading to Washington, D.C. for the annual March for Life.

I am president of the USCCB Office for Pro-Life Activities and, traditionally, the head of that office celebrates a Mass for the directors of pro-life offices and other pro-life leaders at the Franciscan Monastery of the Holy Land in America in Washington D.C. on the day before the March.

Afterwards, I had an opportunity to greet the different pro-life leaders from around the country who were in attendance. Of course our own Marianne Luthin and her husband Henry were there, as well as Janet Benestad, our Cabinet Secretary for the New Evangelization.

Then on Thursday (1/22), the day of the March, as we have for several years now we began the day with a Mass with all the Boston pilgrims at the Shrine of the Sacred Heart, the Capuchin church on 16th Street.

It was standing-room-only with all the people from Boston who were there. All told, there were about 1,000 people among the pilgrims, chaperones, seminarians and priests.

Of course, a few parishioners also managed to squeeze into the Mass to come to see me because I was pastor there for many years. In fact, the current pastor, Father Moises, was a member of my youth group!

In my homily I expressed my nostalgia in coming back to Sacred Heart every year and I told the young people about my experience there, particularly during the time of the 1968 riots when there were 700 fires in that neighborhood and we were living in the basement with hundreds of people. I described the scene, with tanks surrounding the White House and soldiers with bayonets on every corner. It was a very disturbing time. I also told them that the minister who is shown being beaten to death in the film Selma had worked just two blocks away, down the street at All Souls Church.

So I was trying to give a little bit of historical context to our young people and told them that, when I was a seminarian, the greatest issue we faced in the country was racism and discrimination. But then, when I was a young priest, Roe v. Wade came about and we found ourselves facing another great assault on human dignity. This is what brings us to Washington as a people of faith, to witness to the sacredness of life which is a centerpiece of the Catholic social teaching.