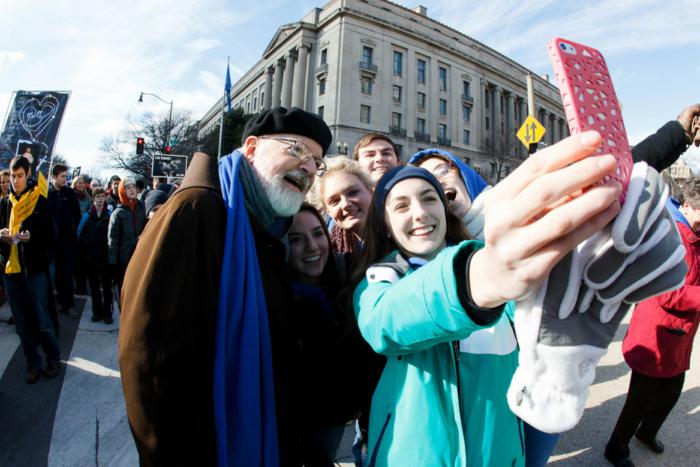 Cardinal O'Malley poses for a "selfie" with Boston students at the annual March for Life in Washington, D.C. Jan. 22. Pilot photo/Gregory L. Tracy

WASHINGTON -- Hundreds of pilgrims from the Archdiocese of Boston joined hundreds of thousands of advocates for human life from around the nation, Jan. 22, at the March for Life in Washington.

Pilgrims from Boston numbered more than 800, the vast majority youth and young adults, while the march drew hundreds of thousands nationally.

Before the march began, all pilgrims from Boston converged on Sacred Heart Shrine for a rally and Mass with Cardinal Seán P. O'Malley that has become an annual tradition for marchers from Archdiocese of Boston.

"It's a great joy that you are here, and your presence is a very valuable witness in the Church. I welcome all of you to this pilgrimage for life," Cardinal O'Malley said.

He recalled his time at the shrine, which is under the care of the Capuchin order, where he served as a younger priest in Washington during the Civil Rights movement.

"When I was here in Washington, particularly when I was in seminary to become a priest, one of the great struggles of our country was around desegregation. This neighborhood, in many ways, was a witness of that struggle," Cardinal O'Malley said.

He recalled the news of the death of Martin Luther King Jr. and its impact on the parish community and the surrounding city.

"There was an immediate reaction in the whole country. Here in Washington there were terrible riots," he said.

He painted a picture for the gathered of a neighborhood in flames in reaction to the news, but he added that the church community pulled together through the tragedy.

"There were 700 fires in this neighborhood. I lived in the basement of this church with 700 families that had lost their homes," he said.

He said tanks surrounded the White House while soldiers with fixed bayonets lined the streets.

"It was a truly horrific time, but out of people of faith coming together the country was able to find a new path that led us away from that rather dark period. In 1973, when I was a very young priest, a new crisis came upon us -- that was the decision of Roe vs. Wade," Cardinal O'Malley said.

He said the Supreme Court decision that threw out state laws restricting abortions also started a new movement for human rights. In recent years the movement and the March for Life have increasingly attracted more and more young people. Cardinal O'Malley reiterated a message he delivered the evening before at the National Shrine of the Immaculate Conception, for an audience estimated around 10,000 strong.

"All of the polls show that Americans are becoming more and more pro-life, especially our young people. As they say, pro-life is the new normal according to the Gallup poles, so I congratulate all of you folks for being normal," he said.

After the Mass, groups travelling from Boston grabbed bagged lunches in the basement of the church and boarded busses headed toward the Washington Monument, where the march began. Boston pilgrims had travelled to the march in multiple groups. Groups of young people, young adults and families travelled with the Office for Lifelong Faith Formation and Parish Support's Faith Formation of Youth and Young Adult Ministry. Parishes, local pro-life groups and seminarians from Pope St. John XXIII, St. John Seminary and the Redemptoris Mater Seminary also travelled to the march.

The seminarians joined with the groups in an effort to keep Boston pilgrims together during the march, a goal of archdiocesan organizers this year. Another effort coordinated the plans of those who marched even further -- what Father Matt Williams, director of the Office for Lifelong Faith Formation and Parish Support's Faith Formation of Youth and Young Adult Ministry, called "Marching orders."

"Every 10 minutes beginning at one o'clock, we are going to engage in some type of activity -- whether it's music, a chant, or prayer," he said.

After busses shuttled the entire group to the Washington Monument, the combined army of Boston advocates for human life began the March for Life.

"St. Michael the Archangel, defend us in battle," the Boston group prayed in unison, promptly at 1 p.m. as the march up Washington's Constitution Ave. began.

Before joining Father Daniel Hennessey and Father Michael Harrington to lead the pilgrims in prayer in front of the Supreme Court, at One First Street Northeast, Father Williams started one last chant.

"Boston Strong," he said into a bullhorn.

"We choose life," the Boston contingent yelled back.