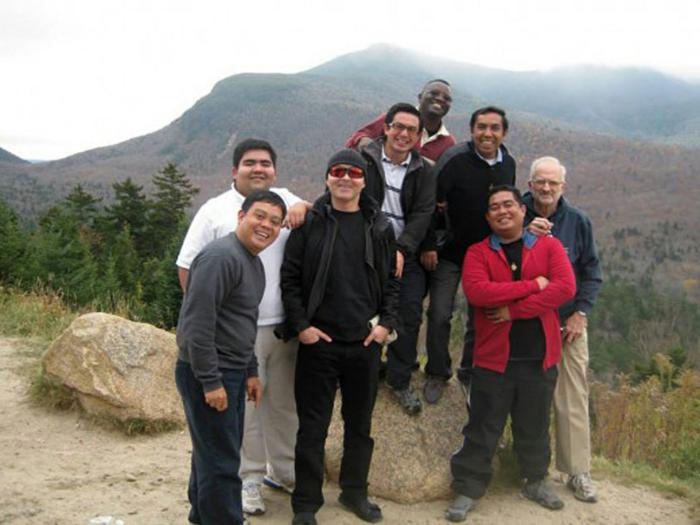 Ignorance of the faith -- indifference to it -- outright unbelief. The Church in a state of ruin. A century of violence and political turmoil.

In the eyes of Father Emmanuel d'Alzon, this was the situation in France in the decades after the French Revolution. Yet in 1835 -- three years after the struggle and tragedy of the June Rebellion depicted in "Les Miserables" -- Father d'Alzon had an insight. "They say the world is evil," he wrote to a colleague. "No doubt, passion turns it away from what is good. But I believe most of all that the world is ignorant."

Convinced that the world's intellectual crisis was at the heart of its social and political crises, Father d'Alzon had the inspiration to found a religious congregation that would advance the Kingdom of God through "education in all its forms."

The Augustinians of the Assumption (AA), or "Assumptionists," took their name from the College of the Assumption, one of the senior high schools they ran for Catholic boys. But their understanding of "education" went far beyond schools. Father d'Alzon installed a library in nearly every parish in his diocese. He and his brothers founded scholarly journals and newspapers. They established numerous social works, ministering to at-risk youth and impoverished servant girls. They engaged in scholarship and dialogue with Protestants and Orthodox, all in pursuit of truth.

The Assumptionist presence in the United States began in 1895 with construction on a new Catholic university that would serve the American northeast. The Assumptionists still staff Assumption College in Worcester, in addition to running a vibrant campus ministry program and men's discernment group there.

"Education in all its forms" characterizes the ministry of other New England-based Assumptionists, too. Our world-famous Bayard Press -- which publishes "La Croix," one of the oldest and most-read daily newspapers in France -- has its American office in New London, CT, and produces a number of worship, catechetical, and audio-visual materials. It is a wonderful apostolate for religious men who are interested in working in journalism and publishing.

We also staff St. Anne Shrine and St. Patrick Parish in Sturbridge, Massachusetts. This vibrant parish, with its dynamic preaching, youth ministry, and other programs, attracts worshipers from several states and dioceses. The shrine is a special place of pilgrimage for the sick and for parents who have lost children, and also hosts an extraordinary icon museum filled with art from the Assumptionist missions in the East.

Moreover, Assumptionists from our province staff parishes, language schools, and social apostolates among the poor in Mexico and the Philippines, as well as at Montmartre, a center of faith and culture that provides seminars, lecture series, and other forms of continuing religious education to Quebec City and its environs.

Here in the Archdiocese of Boston, we have a fascinating mission called the Assumptionist Center. Located in Brighton, it serves as our provincial headquarters and also as our house of formation for scholastic brothers studying theology at Boston College. This unique community welcomes lay students and working professionals, who live, pray, eat, and study alongside our seminarians. The Center provides regular programming of prayer and Sunday conversations on church- or theology-related topics, so that "together," in the words of Father Donald Espinosa, AA, "we can learn what it means to be Church."

We would like to encourage young men who are interested in religious life to visit and get to know us. Some of them -- some of you! -- may wonder: For whom is our community a good fit?

"I was attracted to the Assumptionists' balance between active and contemplative life," says current postulant Brian Verzella, a graduate of Northeastern and composer of contemporary Christian music, "as well by their vibrant and close-knit community."

Indeed, following the Rule of St. Augustine, we place a high priority on the common life: common prayer, meals, work, and recreation. Our shared life is at the core of who we are as brothers, striving to be of one mind and heart, intent on God. We value hospitality, and one young man on a recent discernment retreat told us that he felt like part of a family when he was among us.

Another defining characteristic of our community is its commitment to traditional values expressed in a contemporary way.

"The Assumption is traditional," Father Richard Lamoureux, AA, explains, "in its embrace of St. Augustine and monastic values like study, contemplation, silence, fraternal life, and common prayer, and in its emphasis on Jesus Christ and on love of the Church and the Pope. But it is modern in its desire to renew society through the truth and the brilliant light of the eternal Word, using a language and means that will reach the people of our day."

Want to find out more about our joy as Assumptionist religious? Come and see: www.assumptionists.org.

Brother Ronald Sibugan, A.A., is the Vocation Director of the U.S. Territory of the Augustinians of the Assumption. Mr. Nicholas Collura coordinates the Vocation Committee.