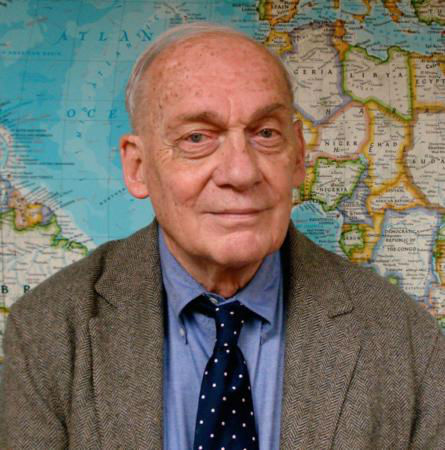 Former U.S. Ambassador Robert White, who refused to cover up murders by El Salvador's death squads in the 1980s, died Jan. 13 at age 88. During his 25-year diplomatic career with the U.S. State Department, White specialized in Latin American affairs with a particular emphasis on Central America. He is pictured in an undated photo. (CNS photo/Handout via Reuters)

ARLINGTON, Va. (CNS) -- Former U.S. ambassador Robert E. White, who put his diplomatic career on the line to get answers to the 1980 murders of four U.S. churchwomen in El Salvador, died of cancer at a hospice in Arlington Jan. 13. He was 88 years old.

Funeral details were not immediately available.

At the time of his death, he was a senior fellow at the Center for International Policy in Washington. He also had previously served as president of the center, a think tank founded by former diplomats and peace advocates from the Vietnam era.

During a 25-year career in the U.S. Foreign Service, White specialized in Latin American affairs with a particular emphasis on Central America.

He was U.S. ambassador to El Salvador in the Carter administration when four U.S. churchwomen were brutally raped and murdered in that country in 1980.

A New York Times account said that two of the women, Donovan and Sister Kazel, had spent the night Dec. 1, 1980, at the U.S. Embassy in San Salvador as guests of White and his wife.

The ambassador was on hand when their bodies were recovered from a shallow grave two days after the women were murdered.

"The ambassador provided significant logistical and emotional assistance to the Maryknoll Sisters in the days and weeks following the women's deaths," said a statement issued Jan. 16 by Maryknoll. He was "a great and courageous man, a man of truth," it said.

White was a vocal critic of the Reagan administration's response to the women's deaths and the subsequent investigation.

At the time, he did what he could "to oppose policies that supported dictators and closed off democratic alternatives," White wrote in 2013.

By February 1981, then-Secretary of State Alexander Haig, Jr. forced White's resignation from the Foreign Service because White refused Haig's demand "to use official channels to cover up the Salvadoran military's responsibility for the murders."

"The Maryknoll Sisters will always remember Robert White with the deepest admiration and respect, and will always have great appreciation for the efforts he took to support fully the communities of both the sisters and the Salvadoran people whom they served," the order's statement said. "He was an exceptional public servant and he will be missed. The Maryknoll Sisters hold his family and friends in prayer."

Five members of El Salvador's national guard were found guilty of the murders of the women in 1983. Efforts to hold the guardsmen's superiors responsible led to civil trials in the United States of retired Gens. Carlos Eugenio Vides Casanova, a former director of the Salvadoran national guard, and Jose Guillermo Garcia, former defense minister. They were accused of covering up the deaths of the four women.

Though a federal jury cleared the men of culpability in the women's murders, in 2006 the 11th U.S. Circuit Court of Appeals upheld a civil suit holding them responsible for torturing three Salvadorans and awarding the plaintiffs $54.6 million.

White testified in the suit against the two retired Salvadoran generals, who were living in Florida.

According to a biography of White on the Center for International Policy website, among the posts he held were Latin America director of the Peace Corps, deputy permanent representative to the Organization of American States and ambassador to Paraguay.

He retired from the Foreign Service in 1981. He then served as a senior associate at the Carnegie Endowment for International Peace. He joined the Center for International Policy as its president in 1989, presiding at conferences and leading delegations to several Latin American and Caribbean countries. He also published numerous studies of U.S. policy toward the region, and led an ongoing effort to reform U.S. intelligence agencies.

Born in Melrose, Massachusetts, Sept. 21, 1926, White enlisted in the Navy at age 17 and served in the Pacific during World War II.

He earned a bachelor's degree from St. Michael's College, a Catholic college in Vermont, in 1952. He won a Fulbright Scholarship and earned a master's degree from the Fletcher School of Law and Diplomacy at Tufts University in 1955.

That year, he married Maryanne Cahill and joined the Foreign Service. His first assignments were in Colombia, Ecuador, Honduras and Nicaragua.

He is survived by his wife and the couple's son, Christopher, and their daughters, Claire Kelly and Marylou White, and three grandchildren.