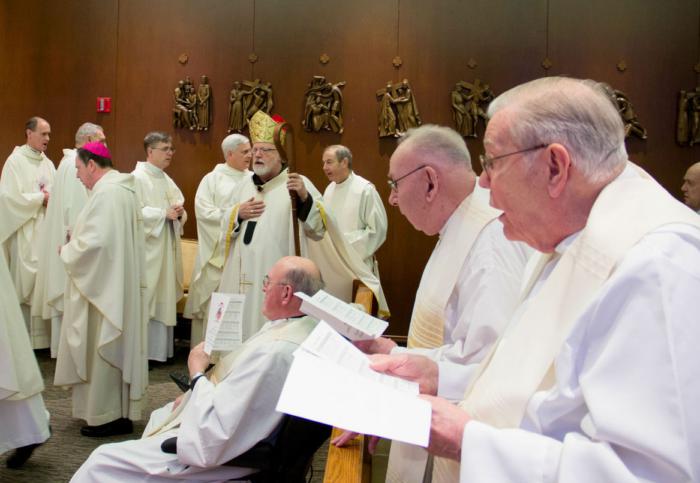 WEST END -- Cardinal Seán P. O'Malley continued his annual tradition of making a Christmas season visit with the priests of Regina Cleri Jan. 8. The visit was made all the more special this year with the celebration of two important milestones: the facility's 50th year and the commemoration of the more than seven decades of priesthood of resident Msgr. Alfonso G. Palladino.

The cardinal began his visit celebrating Mass with the retired priests and staff of the residence.

"There are great spiritual hungers in our world -- a hunger for forgiveness and reconciliation, a hunger for meaning, a hunger for family, for community -- and in the priesthood Jesus Christ has given us a way to fulfil those hungers of humanity," Cardinal O'Malley said in his homily.

Msgr. Palladino marked 72 years since his ordination to the priesthood in 1943 at the hands of then-auxiliary Bishop Richard J. Cushing.

"We are celebrating this year the 72nd anniversary of Msgr. Palladino. That was before I was born, so that's a few years ago, but in this Eucharist we give thanks for our priesthood, for the privilege and the opportunity that we have to be able to share in this beautiful mission of Jesus, making visible in the world the merciful face of the Father, and fulfilling these spiritual hungers that people have in their hearts," the cardinal said.

Regina Cleri continued its 50th year celebration with the event. The residence was constructed by Cardinal Cushing after much of the West End was razed between 1950 and 1960. Cardinal Cushing dedicated the facility in December 1964, with an open house for pastors of the archdiocese. One of the traditions maintained at the residence is a visit from the bishop just after Christmas.

At the dinner following the Mass, Msgr. Palladino cut a cake commemorating his service, before the cardinal asked that he give a blessing.

"My years as a priest have been the happiest years of my life, and I thank God for every one of them," Msgr. Palladino told The Pilot afterward.

Along with the cardinal, several of the archdiocese's auxiliary bishops attended the annual gathering to share fellowship with the retired priests of the Archdiocese of Boston at Regina Cleri.

"I actually lived here for three months, recuperating from a fall, so I really got to know them and got to appreciate them, and I always look forward to coming back here. I try to get here often during the year," he said.

Father Vincent Eugene Daily said visits by the cardinal connect the residents, in a sense, with the larger Church.

"He reminds us that we belong to a Church that is worldwide, so he keeps us focused on the Church here and the Church beyond the borders of the diocese. That's been helpful to me as a priest, and I am sure it has been to the priests here," Father Daily said.