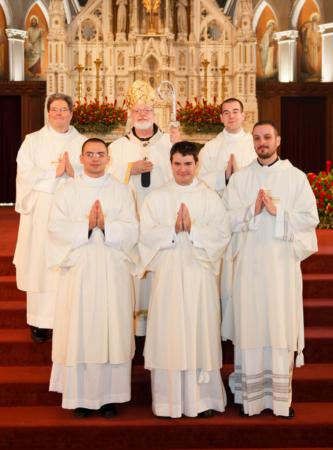 SOUTH END -- Cardinal Seán P. O'Malley celebrated the Rite of Ordination to the Order of Deacon at the Cathedral of the Holy Cross, Jan. 10, for five men on their journey toward the priesthood.

Deacons Anthony Cusack, Andrea Filippucci, Christopher Lowe, Peter Stamm, and Sinisa Ubiparipovic, took the last major step toward service as priests with their ordination. The five men are set be ordained to the priesthood on May 23.

In his homily, Cardinal O'Malley thanked the community of families, faculty, and staff of the seminaries that have supported the men up to this point in their journey.

The word "deacon" comes from the Greek word "diakonos" meaning servant or minister.

"Deacon is a fancy Greek word, but do you know it doesn't mean important, holy man. It doesn't mean big shot, or church leader, or lord high executioner. It means servant. Jesus describes his mission when he says, I come not to be served but to serve," the cardinal said.

The first of three ranks of ordained ministry in the Church, deacons perform many services to the Church in conjunction with the ministries of priests and bishops. In parish life, deacons may preside at baptisms, weddings and rites of Christian burial, assist the priest at Mass, proclaim the Gospel and deliver homilies.

"Jesus is teaching us how to be humble and how to be humble servants, to wash each other's feet. Only then does he give us the Eucharist and the priesthood. In today's Gospel, Jesus says, whoever serves me must follow me, and where I am there also will my servants be. Well, Jesus' servants are here today," the cardinal said.

Following the homily, the men approached the cardinal one-by-one, kneeled and promised respect and obedience to the cardinal and his successors. To signify humble submission before God, the men lay prostrate in the sanctuary while the assembly sang the Litany of Saints.

The deacons then received a stole and dalmatic, signifying the office of diaconate and the deacon's role in the celebration of the Eucharist. Next, the newly ordained deacons knelt before the cardinal who presented them with the Book of the Gospels as symbol of their new ministry of proclaiming the Gospel and preaching. The Rite of Ordination concluded with the kiss of peace before they ministered the Eucharist for the first time as deacons.

Florence Stamm said she and her husband were very excited for their son, Deacon Peter Stamm. She said they saw his commitment to the faith early in his life.

Deacon Stamm said he remembered feeling a more solid call to the priesthood in the ninth grade.

"I am just very grateful to God and to all those who have been with me throughout this process," he said.

Deacon Andrea Filippucci said his calling toward the priesthood brought him through Redemptoris Mater Seminary to Boston. He referenced the Bible book of the Song of Songs in his explanation of why he looked forward to serving Boston as a priest.

He said his search culminated in turning toward God's mercy while turning away from his pursuit of materialism and the party life.

"In my life in Italy I looked for life, for happiness, in many, many, many things -- girls, and money and all kind of success -- until I really found myself empty. That's when God spoke to me, and I received this call," he said.