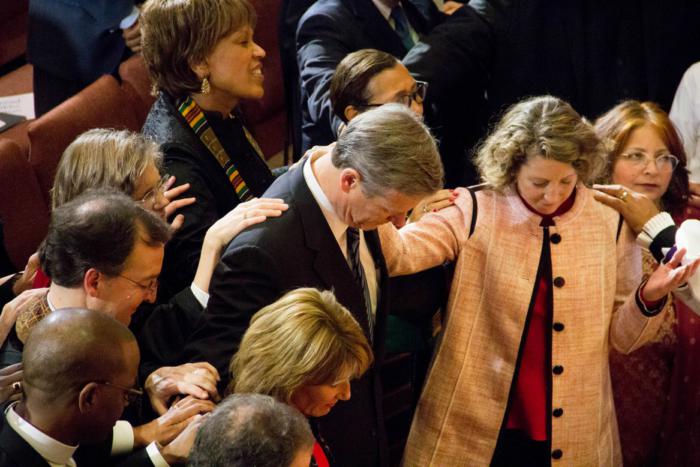 Faith leaders pray over pray over Gov. Charlie Baker at an interreligious prayer service held on the eve of his inauguration Jan. 7. Pilot photo/Christopher S. Pineo

BOSTON -- Massachusetts' new Governor Charlie Baker and Lieutenant Governor Karyn Polito gathered in prayer with Boston-area faith leaders on the eve of their inauguration, as they joined an ecumenical and interfaith prayer service at Boston's Congregacion Leon de Juda (Congregation Lion of Juda), Jan. 7. It was the first time a majority Latino congregation hosted such an event for an incoming governor.

"I think most of us would agree that we are here because we see the spiritual dimensions that are the platform for everything else that can be done in the human realm, as we seek God's blessing and his approval, as we seek to align ourselves with the values of the kingdom of God, then I think we can truly hope for a blessed administration -- for an administration of justice, of love, of grace -- and aspire to enjoy the blessing and the wisdom of God in every decision that is made and every action that is taken," Rev. Miranda said.

Cardinal O'Malley gave the invocation for an evening of prayer, reflection, and song that brought to bear voices of Boston's faith community.

The cardinal called upon the incoming governor and those gathered to reflect on hope and service the evening before the inauguration.

"Hope and service are two indispensable commitments for governments, community, and the good order of society. These are also the themes of the world's great religions. God's promise of redemption and salvation is the source of our hope, and we serve because God asks this of us, because it is good for us to do so," Cardinal O'Malley said.

The prayer service continued with 12 readings from Scripture and other writings. Readers included Rev. Burns Stanfield of the Fourth Presbyterian Church of South Boston, Bishop Talbert Swan of Spring of Hope Church, and Rev. Laura Everett of the Massachusetts Council of Churches.

Religious leaders also presented the incoming governor with gifts during the prayer service. Rev. Liz Walker presented him an orange road cone, to mark his parking space if he ever visits at Roxbury Presbyterian Church where she serves.

In his keynote reflection, Bishop A.L. Foxworth of Grace of All Nations Church in Dorchester reflected on the character of the governor-elect as he recalled the gubernatorial race of 2010.

"Give me your attention for just a moment and come with me. The year is 2010. It is the second of November. A candidate has stepped to the podium to give the dreaded concession speech. He is an extraordinary man, who is keenly aware of his purpose, his calling, his destiny. In the face of what conventional understanding calls defeat, he makes the following statement with gravitas, 'We fought the good fight, and we will be stronger for having fought this one,'" Rev. Foxworth said.

He said in that statement he heard the sentiment that a good fight, unto itself, contained a victory even without the intended result.

"Therefore, brother Baker, I want to encourage you to keep on keeping that attitude and that philosophy, and know that every fight will not bring about the desired end. But, never see it as a loss. Continue to say, 'We will be stronger having fought this one,'" he said.

Perhaps the most powerful moment of the evening came when faith leaders from throughout the city filled the aisles of the church and laid hands of blessing upon the incoming governor. The faith leaders gave their blessing simultaneously. Those not able to reach the governor personally put their hands upon the faith leader in front of them in a kind of communal "laying of hands."

"We fervently pray that you, who enlightens and sanctifies every human being, shall bestow your blessings upon Charles Baker and Karyn Polito, whom you in your divine providence have called to serve the citizens of this commonwealth," Metropolitan Methodios prayed after the blessing.

In his closing remarks to the gathered faith leaders, Baker recalled his effort to find just the right passage to share that evening. He said he has worried throughout the prayer service that one of Boston's faith leaders might read the same passage he and his wife had chosen for the occasion.

"You scared me twice tonight, because other people picked Philippians, and I thought, 'Oh my God, here it goes,'" Baker said.

But Baker had chosen a part of the epistle that had not yet been shared -- a verse focused on service to others as an act of dedication to God.

"Do nothing out of selfish ambition, or vain conceit. Rather, in humility, value others above yourself, not looking to your own interests, but each of you to the interests of others," he read.