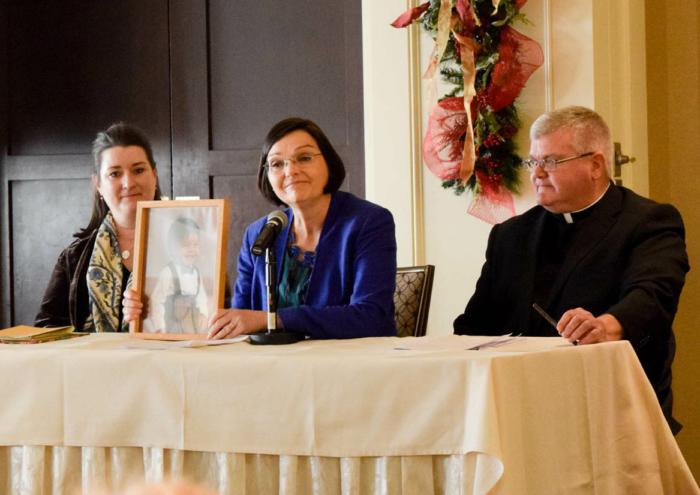 NORWOOD -- On the morning before Gaudete Sunday, women from across Massachusetts rejoiced in the blessing of adoption. Together at the Women Affirming Life Breakfast, they spoke about the graces that accompany placing children with new families.

The breakfast, sponsored by both Women Affirming Life and the Archdiocese of Boston's Pro-Life Office, took place at the Four Points by Sheraton Norwood on Dec. 13. The following day was the third Sunday in Advent, named for the Latin word "rejoice."

During the gathering's panel discussion, two women -- one an adoptive mother and the other a woman who placed her child up for adoption -- shared the panel with Father Vincent Daily, pastor at St. Gregory Parish.

In a prerecorded video, Cardinal Seán P. O'Malley spoke about the importance of sharing the generosity, love and courage of adoption stories. He assured those gathered at the breakfast of his prayers for them at his Mass with Pope Francis in Rome.

Ann Tracy Farabaugh, the panelist who placed her daughter up for adoption, said she kept a "veil of silence" around the adoption for decades. She was 19 when she became pregnant 27 years ago.

Farabaugh credits her parents with her ability to choose life for her daughter.

"Their support was off the scale," she said. "Had they not been supportive, I don't know what would have happened."

Farabaugh chose to place her daughter with a big Catholic family, much like her own. She wanted the best for her daughter and said that her daughter's life was "all that mattered."

"Love is willing the good of the other," she added.

Several years ago, Farabaugh's daughter reached out to her, and they had the opportunity to meet. Farabaugh called it "one of the most amazing moments of my life."

His parents were unable to have children for eight years. They decided to adopt two children, and then, two more were born into the family. He said he does not know what he would do without his older sister.

He said of his sister's mother, "She gave me a wonderful, loving sister, a rock that I depend on every day."

Mary Lemire Campion said she is grateful to her son's birth mother, whom she called her sister in Christ. She prays for the woman and hopes to meet her in heaven.

After years of infertility, Campion prayed to God about adopting a child.

She and her husband adopted a little boy from Guatemala. Soon after, she learned she was pregnant. Her sons were born just 13 months apart.

"Our God is a God of surprises," she said.

Campion said her family is "just like any other family." They have their highs and lows -- and take lots of pictures.

She said that the pro-life community can help adoptive families by speaking positively about adoption and choosing their words wisely. She advised refraining from calling birth parents "real parents." Rather than saying a mother "gave up" or "gave away" a child, she suggested saying the woman "made an adoption plan."

"Families formed through adoption flourish with your love and support," she told the crowd. "Together we can demonstrate the love without limits that God calls us to."