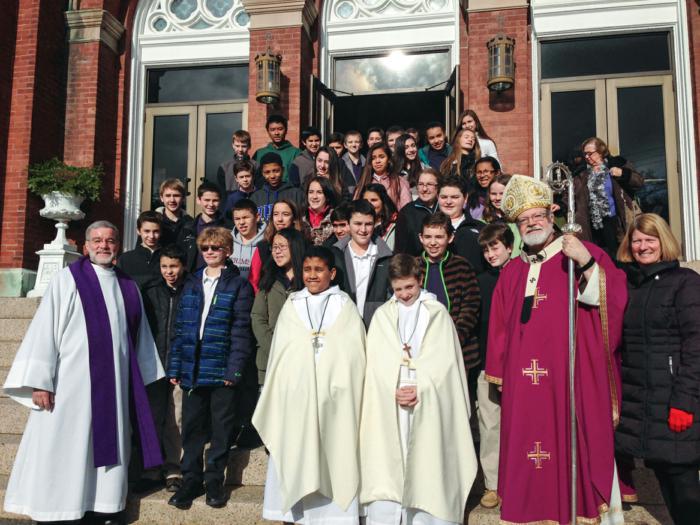 'But before I left, on Friday (12/5) I went to St. Augustine School in Andover for the celebration of their 100th anniversary.' Pilot photo/CardinalSeansBlog.org

I am writing to you this week from Rome, where I have been for much of this week for meetings with the Holy Father. But before I left, on Friday (12/5) I went to St. Augustine School in Andover for the celebration of their 100th anniversary. We blessed the cornerstone for the school's new gymnasium, followed by Mass in the parish church with the entire school. The parish is run by the Augustinians and the pastor there is Father Peter Gori. The school was founded by the sisters of Notre Dame, and there is still a presence of the sisters at the school. A century is a great landmark, and the school is thriving and continues to expand. I was very happy to be a part of this very joyful celebration. We were also pleased that a number of parents were able to join the celebration along with the students and teachers.

That evening, I attended the Labor Guild's annual Cushing-Gavin Award celebration at the Sheraton Boston. It is always a very large event, with nearly 1,000 people in attendance. Each year at the banquet, the Labor Guild presents awards to a union official, a representative of management, a labor attorney and a mediator. I was there to give the invocation and to congratulate the evening's honorees. This year's award recipients were William McLaughlin, International Union of Operating Engineers (IUOE) Local 4; Thomas Ryan III, director employee-labor relations at National Grid, New England; Attorney Shelly Kroll of the law firm Segal Roitman LLP; and Paul Chabot, commissioner of Federal Mediation and Conciliation Service.

God of this City Tour

From there, I went to the cathedral for the final night of the God of this City Tour, which is sponsored by our Faith Formation of Youth and Young Adult Ministry. I was there for the Holy Hour, after which I addressed the young people. It was December 6, so I spoke to them about the Advent tradition of St. Nicholas.

Tuesday (12/9) we began our meetings with the Holy Father, and in the evening I had dinner with the Boston seminarians studying in Rome. Thursday (12/11), Msgr. John Abruzzese, a Boston priest working at the Holy See's Synod Office, brought us relics to bring back to the offices of the CatholicTV Network -- it is a relic of Blessed Luigi and Zelia, parents of St. Therese the Little Flower. The relics of St. Therese and her parents had been brought for the opening of the Extraordinary Synod on the Family to stress the importance of holiness and the family -- here was a daughter who was a saint, now and her parents are also being canonized. The CatholicTV network is under the patronage of the Little Flower and we have a small shrine to her with the relics of St. Therese, and now there will be relics of her parents there, as well.

Throughout the week, we have been holding meetings with the Holy Father and the group of cardinals advising him. During our meeting, I gave a report on the work of the Commission for the Protection of Children, of which I am the head, and we were very pleased to say that we hope to announce the new members of the commission soon. We will hold the first meeting of the full commission in February.