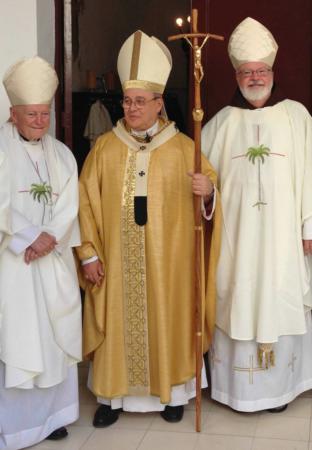 BRAINTREE -- Cardinal Seán P. O'Malley played a substantial role in recently-announced restoration of diplomatic relations between the United States and Cuba, according to local media.

The Boston Globe reported this week that outreach from Cambridge non-profit Beyond Conflict founder and chairman Tim Phillips to Cardinal O'Malley eventually brought the issue to the attention of the Vatican and Pope Francis himself.

According to reporting at the Globe, the group sent a memo to Cardinal O'Malley suggesting that Pope Francis talk to President Barrack Obama about normalizing relations with Cuba.

"We are excited to share our role in recent developments related to Cuba. Beyond Conflict has been actively working for three years to help Cuban Americans prepare for eventual reconciliation with Cuba," Beyond Conflict posted on their Facebook page, Dec. 18.

The organization has been recognized internationally for peace efforts in Northern Ireland, El Salvador, and South Africa.

According to Phillips, the cardinal stayed involved throughout the process. The president and the pope sat down for face-to-face meeting in March, after Cardinal O'Malley received the memo.

Cardinal O'Malley travelled to Cuba in August when Archbishop of Havana Cardinal Jaime Ortega celebrated 50 years since his priestly ordination. The cardinal met with Cuban officials at that time.

According to an August post in the cardinal's blog, he met with Ambassador Jeffrey DeLaurentis, Aug. 14, who had recently been named Chief of Mission at the U.S. Interests Section in Havana.

"This is a very important moment in American diplomacy, particularly around the issue of Alan Gross's captivity and the desire to normalize the relationship between our countries and bring an end to the embargo," Cardinal O'Malley said in his blog.

With the involvement of the Vatican and Canada, President Obama and Cuban President Raúl Castro reached an agreement through 18 months of secret talks and meetings between delegations -- one hosted at the Vatican in October -- that resulted in the release of Alan Gross, a 65-year-old American contractor held in Cuba for 5 years, and an unnamed US intelligence agent in exchange for three Cuban agents.

The president thanked Pope Francis, Dec. 18, in an address from the Whitehouse. The president said the measures to normalize relations aim to extend freedom to the people of Cuba.

"To those who have supported these measures, I thank you for being partners in our efforts. In particular, I want to thank His Holiness Pope Francis, whose moral example shows us the importance of pursuing the world as it should be rather than simply settling for the world as it is," he said.