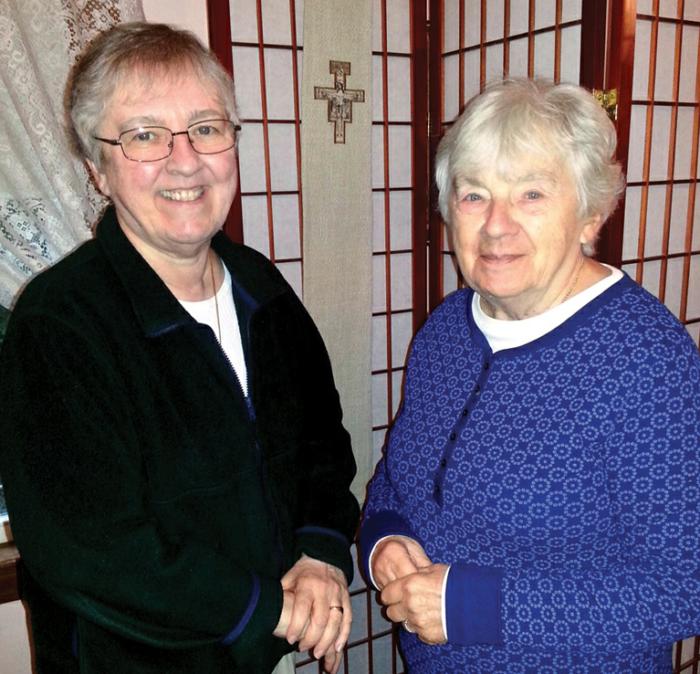 Sister Linda Greenwood, OSF (left) and Sister Kenan (Kay) Rebholz, OSF (right) state that, "The feedback we receive often from our guests is that this is a quiet place where they can feel God's peace." Photo courtesy/Christine Kinnon, Office Manager for the Ministry

In Lowell, Massachusetts, Sister Linda Greenwood, OSF, and Sister Kenan (Kay) Rebholz, OSF, are two Sisters of St. Francis of Assisi who serve in a variety of roles vital to meeting the spiritual needs of today's faithful. San Damiano House of Prayer is located just off of Pawtucket Street, where Fanning Street meets the Northern Canal of the Merrimack River. In 1999, the property was offered to the congregation for one dollar, and Sister Linda believed it was what she was seeking to establish: a house of prayer. "I believe that we are a haven tucked away in a little corner of the world. It is like a cave that Francis of Assisi would have loved, especially when he wanted to break away from his outer world, in order to find again his true self ...."

In addition to the general living area for the two sisters, the house has five guest bedrooms, a chapel, a resource library and a large meeting area. The latter will accommodate groups of up to 15, and includes a full kitchen and restroom facilities.

Retreatants are welcome for a few hours, a day, an overnight, or a retreat that could extend into a few days. They come for many reasons, all of which replenish their spirits. "Religious and laity need inspiration to rediscover the excitement of Jesus' teachings," says Sister Linda. "We try to validate the journey that God is revealing to each person, and then we encourage them to go forth in faith."

Getting in touch with God is key to the different types of retreats offered. Directed retreats include daily meetings with a director who assists with helping the retreatant to recognize God's presence, while private retreats provide an environment of quiet prayer designed to assist the retreatant in responding to God's love.

Guided retreats focus on a particular aspect of one's faith journey and incorporate communal prayer and conferences on the particular topic/s being looked at. All retreatants are invited to common meals and evening prayer.

Spiritual direction is two-faceted. On one hand, it is another of the services offered and its purpose is to assist both religious and laity in discerning their relationship with God. On the other hand, training and certification in spiritual direction is also offered. This is a two-year program with certification available in collaboration with Cardinal Stritch University, a ministry of the congregation.

Bereavement support to those who have lost a loved one, particularly parents who grieve the death of a child, is an additional offering that was added just a few years ago.

The House also has a small lending library of spiritual books, as well as a small bookstore, and a website, www.sandamiano-houseofprayer.org, that describes all of its offerings.

The role of San Damiano House of Prayer does not end here. "We also have a very active group of associates, nine in Massachusetts and four in New Hampshire. These are adults who have committed themselves to live out the Franciscan charism in their lives and to bring it daily into their world. They support us in prayer and are willing to assist us whenever we express a need."

As she reflects on the San Damiano House of Prayer ministry, Sister Linda confides: "I feel that we offer the best of Church and the best of our congregation in what we do here.

Sister Linda, originally from the Lowell area, joined the congregation in 1969. After formation in Wisconsin, she taught elementary school and later became director of religious education in parishes in the Madison and Milwaukee Dioceses. She returned to the East in 1984, ministering in New Hampshire at St. John the Evangelist Parish in Hudson, and as director of the Nashua Deanery Christian Life Center. She then ministered at St. Mary Magdalen Parish in Tyngsborough, before beginning the ministry at San Damiano House of Prayer.

Sister Kenan, a Milwaukee native who entered the congregation in 1948, ministered in elementary education until beginning a career in serving people with special needs. Before coming to work with Sister Linda, she worked at Hanover, in the group homes of Cardinal Cushing Centers, which is another ministry of the congregation founded in the Boston Archdiocese in 1947. Sister Kenan remains active in supporting adults with developmental disabilities.

Jean L. Merry is Communications Director for the Sisters of St. Francis of Assisi.