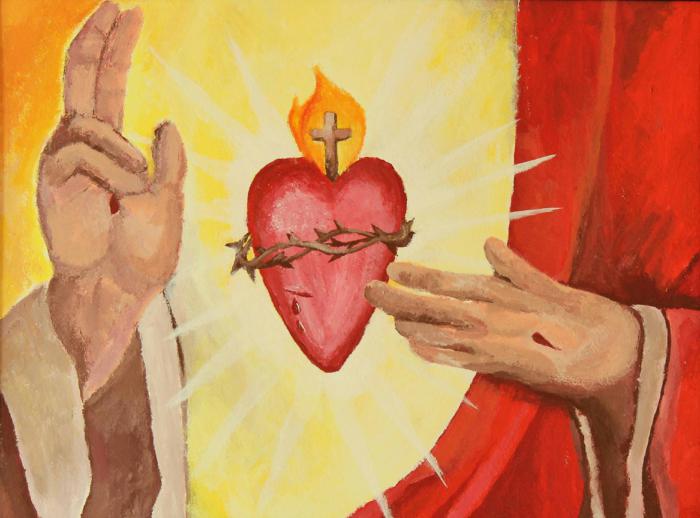 FAIRHAVEN -- Every Catholic family in Massachusetts is invited to open their doors and hearts to Jesus. The Men of the Sacred Hearts of Jesus and Mary in Fairhaven enthrone homes in order to spread the devotion of the Sacred Heart of Jesus. They say that the enthronement ceremony brings peace, promotes prayer and strengthens family bonds. They have seen the benefits in their own homes and the 50 homes they visit each year. They would like to share the devotion's graces with many more.

"Once you open your heart to loving Jesus more, your life starts to change," said Marc Costa, the Fairhaven chapter's president.

There is a second chapter in Fall River, and between the two groups, there are members who are willing to travel all over the commonwealth. "We go from home to home -- wherever we're invited," Costa said.

At the initial visit, the men bring a statue of Mary and get to know the family. The following week, they come again to speak about the devotion to the Sacred Heart. The next visit is the enthronement, which usually consists of a Mass along with the hanging of an image of the Sacred Heart. Later, the men will follow up with the families who become part of a prayer network, and many of the families choose to have their homes re-enthroned.

Father Mateo Crawley-Boevey, SSCC founded the enthronement as an apostolate whose aim is to win souls for Christ. The heart and soul of it is the Eucharist.

The Fairhaven chapter, celebrating its 50th anniversary this year, was the first Men of the Sacred Hearts chapter. Today, there are chapters across the U.S., including Michigan, California and Louisiana. Group members also enthrone schools, businesses and parishes.

The image of the Sacred Heart comes from a series of apparitions beheld by St. Margaret Mary Alacoque, a religious sister who lived in 17th century France. She saw Jesus' heart blazing with fire, representing his burning love for mankind, and encircled by a crown of thorns.

Costa said that the image of the Sacred Heart in homes is a beautiful reminder of Jesus. The hanging of the image is the symbol for a change that takes place in the minds and hearts of the ceremony's participants. The families invite Jesus to live within them and put God first -- as the king of their family. Most people say they participate because they feel called to a deeper relationship with Jesus.

While no cure-all, the devotion to the Sacred Heart does come with graces, he said.

"We all know that life is very difficult," he said. "But no one is alone. You're not alone in this. He will console you if you open your mind and heart to him."

Jose Amaral, another member of the Men of the Sacred Hearts, said that sometimes people are afraid to let Christ into their hearts. He reminded that the Bible frequently urges believers to "be not afraid."

Amaral said that in some cases, he witnessed emotional and dramatic changes after the enthronement ceremony. "We've seen people convert. We've seen people with tears in their eyes after. It's wonderful."

It is also something Amaral wants to share with everyone. He made sure to ask this reporter, "Have you ever had your house done?"

For more information on the Men of the Sacred Hearts, visit menofthesacredhearts.com. The Fairhaven chapter can be reached by calling 508-951-3302.