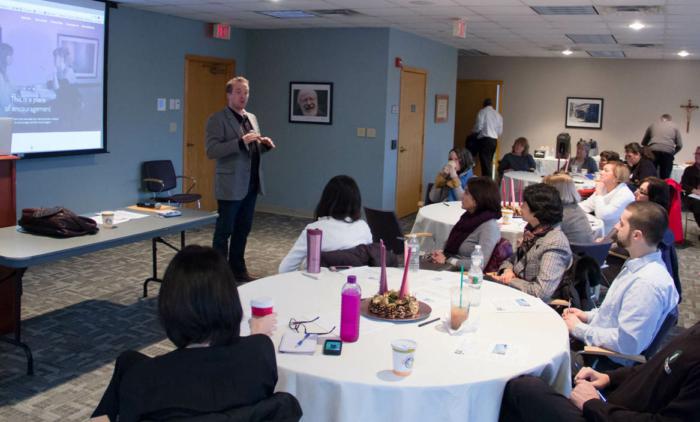 BRAINTREE -- Pornography is proliferating in modern society largely due to the rise of the Internet, participants heard at a Dec. 9 workshop sponsored by the archdiocese's Office of Adult Faith Formation on the realities of pornography.

"We live in a pornographic culture. With the advent of the Internet, we have three A's that came about, pornography became in a way what it had never been before: affordable, accessible and anonymous," he said.

He said parents should consider protective software such as Covenant Eyes, when giving multimedia devices to their children.

"If you have given your child a smartphone, and you haven't been smart enough to put accountability and filtering software on there, what you have given to your child is a portable X-rated movie theater," Fradd said.

He said repeatedly that not taking such protective measures exposes children to things parents very likely don't want them to see.

"The problem isn't that you trust your children, the problem is that you're putting far too much misguided trust in the Internet," he said.

He compared the release of chemicals in the brain during the consumption of pornographic material with adjusting a thermostat in a house.

"It's as if we've reset the pleasure thermostat in our brain," he said.

He said prayer and fasting can help people overcome addictions.

"Prayer without fasting is like boxing with one hand tied behind your back," he said.

"They got really afraid when that happened, and they ought to have been. The culture is turning," he said.

He said changes in attitudes and awareness can facilitate knowledge to help turn people away from pornography.

A question and answer session allowed those who attended the workshop to share their experiences and ask the speaker questions.

Anna Soto, a parishioner at Sacred Heart in Newton, told The Pilot she really enjoyed the talk and saw a calling in Fradd's message.

"As Catholics we have a mission to accomplish in this pornographic culture, and he has given us a lot of tools to start building that mission," she said.

The Archdiocese of Boston offers such workshops for clergy, religious, and lay people to help those interested in the topics addressed who teach, serve in faith formation, and build awareness of the Catholic faith in their parishes. The next workshop will feature Angela Franks, a professor of theology at the Theological Institute for the New Evangelization, speaking about Church teachings on contraception on Jan. 25.

"Our office exists to serve parish leaders and to help them to be better equipped to catechize and evangelize people in the parishes, and so there are a variety of topics that would help them to do just that," Michael Lavigne, director of the Office for Lifelong Faith Formation, said after the event.